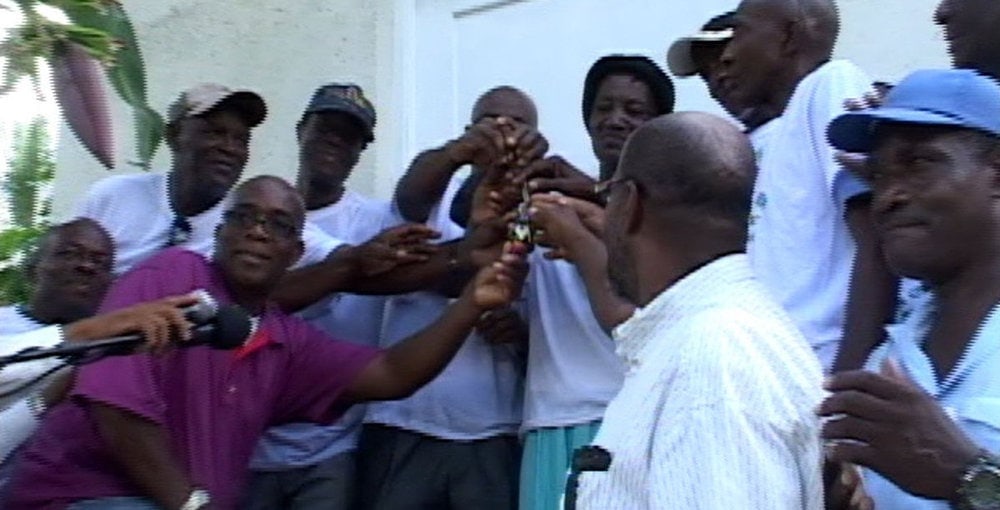 A men’s group from a Seventh-day Adventist church in Jamaica gave an early Christmas present to an elderly woman who lived in a dilapidated home that couldn’t keep out the rain.

The Men's Fellowship group from the Mt. Salem Adventist Church in St. James presented retiree Euphemia Raymond with the keys to a new home that they had constructed for her.

Neighbors came out to watch the Dec. 4 ceremony, and one jokingly remarked to Raymond that “Santa had come early” for her, the Jamaica Gleaner reported.

But Paul Stanton, president of the Men's Fellowship group and a police officer, said the new home had nothing to do with the mythical figure associated with the Dec. 25 Christmas in much of the world.

"This was not a gift from Santa Claus, as from time to time, members of the fellowship engage themselves in missions of caring and sharing," Stanton said. "We are always looking out for persons who are in need, with a view of coming to their assistance."

Standing in front the the house, Raymond praised the men for their gift as tears flowed down her face.

Today, I am one of the happiest woman on earth," she said. "A God send them. God bless them. I am happy, happy, oh so happy. Thank you Lord. Thank you Men's Fellowship. I now have a roof over my head."

Glen O. Samuels, president of the Adventist Church’s West Jamaica Conference, who attended the presentation ceremony, said the building of the home was "a true reflection and testimony of what the church is doing—catering to individuals who are in need."

Stanton said the men’s group became aware earlier this year that Raymond was living in a structure that offered no protection from the rain that often pours down on the Caribbean island. The group determined repairs wouldn’t be sufficient so instead decided to build her a new house.

Stanton did not say how much the house cost but said it was funded by members of the men’s group and various fundraising projects.

Now that the house is finished, them men are looking for new ways to share Jesus’ love.

“With more assistance from corporate Jamaica, we can do much more for the less fortunate in our midst," Stanton said.