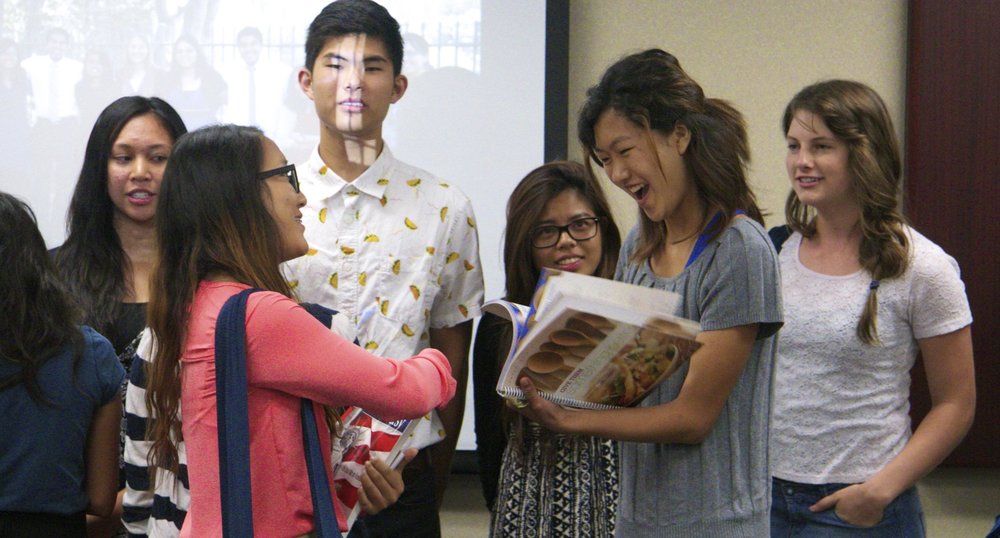 Jessica Choi, a U.S. high school student
selling Adventist books to raise money for school, visited the same house three
times in one day: the first time because it was on her route, and then because
she felt impressed that God had unfinished work for her.

Each time she returned, she was met with a
surprise.

Choi is not alone with a story to tell.
The junior at San Gabriel Academy is among a group of 74 young adults who
distributed 42,400 books, an increase of 26 percent from last year, in southern
California this summer. The books valued at more than $320,000 were distributed
during student visits to 350,000 homes as part of the local church conference’s
Youth Rush literature evangelism program.

In addition, the young literature
evangelists prayed with thousands of people, and more than 150 people signed up
for Bible studies.

Choi said her story started when she
approached a home in the Simi Valley area and found the garage door open, with
a man and his daughter inside.

When Choi handed the man a storybook for
children, he walked toward his home entrance, asking, “How much is it?”

Choi offered a quick response, and he soon
appeared with $20. She gave him a second book of Bible stories as a gift and
thanked him.

As she walked down the street, Choi said,
she felt the clear impression, “Go back!”

Brushing aside the thought, she continued
on her way, but the impression strengthened, she said. Finally, she returned.

“Hi again! I make it a point to show all
my books to someone at least once a day,” Choi told the man. “May I show you
all of them?”

The man agreed. After seeing them, he
slipped inside the house, reappearing with enough money to purchase them all.
Pushing aside the books, he said, “I don’t need the books, but here is
something to help you with school.”

Choi encouraged him to take the books
anyway. “We love to leave the books with people,” she said. “Can you think of
anyone who might need them—someone struggling spiritually or wanting a
healthier life?”

The man couldn’t think of anyone. So Choi
gave him a children’s book and a copy of Ellen G. White’s classic Steps to Christ, and continued down the
street.

A few doors away, she felt the
overwhelming impression again: “Go back!”

The garage door was closed. Choi
approached the front door, and as her hand went forward to knock, the door
opened.

“I was coming to find you,” the man said.
“I know someone who could use the books you showed me. Is it too late to get
them all?”

Choi said she left the house beaming,
knowing that God had spoken to her and she had willingly gone where He sent.

Joseph Samaniego also spent his summer
selling books with Youth Rush, which is sponsored by the Southeastern
California Conference’s Student Literature Ministries department and
offers students ages 16-25 the opportunity to learn how to share Jesus through
literature in a 10-week summer program.

Samaniego, a young Peruvian, said he stood
in awe at one house as he watched a woman whom he had just met share his books
with her neighbors.

“Just pick two of your favorites! I’ll pay
for you,” the woman told her next-door neighbor.

The woman then directed Samaniego to the
nearby home of a Peruvian family.

Samaniego was thrilled at the possibility
of sharing books with people of his own heritage, and as he introduced himself,
his first customer rejoined him and insisted on buying
several books for the Peruvian family. The surprised Peruvian neighbor asked,
“You would do that for me?”

“Of course! How could I keep something so
wonderful to myself?” his first customer replied.

Elsewhere in southern California, student Richard
Gutierrez found Karen working on a flowerbed on her front lawn. As he tried to
hand her a book, she shook her head. “I’m not interested. My back hurts, and
I’m not in the mood today,” she said.

Gutierrez asked if he could instead sing
"Turn Your Eyes Upon Jesus" for her. Karen nodded.

After he sang, he handed Karen a copy of Steps to Christ and told her that it
held the keys to peace and freedom from worry. Karen began to weep, saying she
needed that peace.

Then Karen surprised the young man.

Gutierrez said later that he recognized at
that moment that God had arranged the meeting with Karen.

He told Karen that he would like to give
her some more books right away.

“For that donation, you can have these
other books as well,” he said, holding out several devotional and health books.

Karen gave Gutierrez $200 and chose 19 of
his books. After prayer, she signed up for Bible studies.