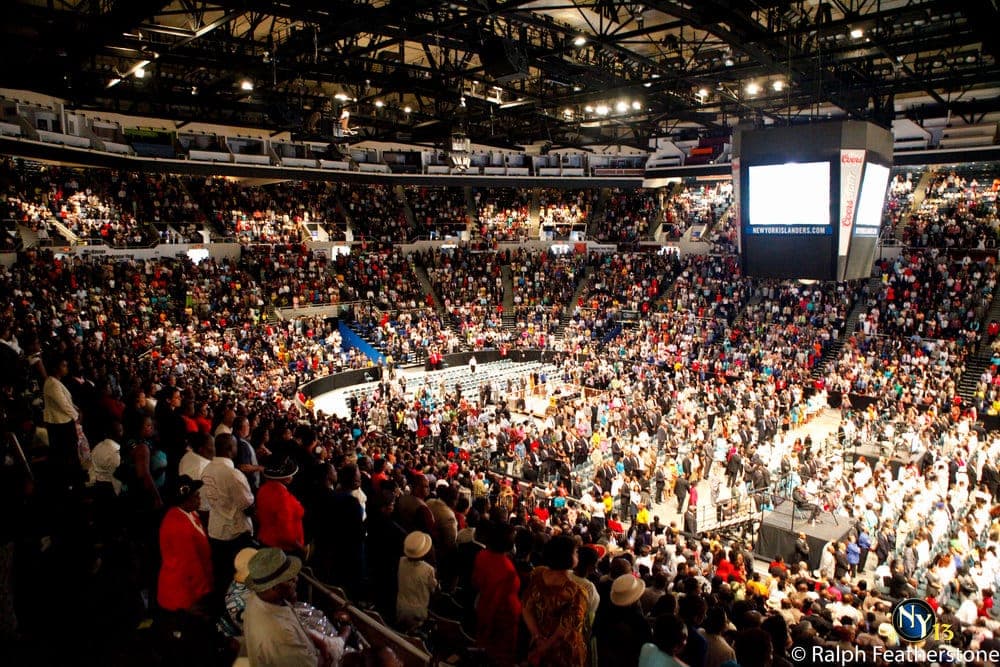 A young female business executive working in Manhattan felt a desire for a change.

She happened to befriend a young professional with an Adventist background, and the two began attending a three-week evangelistic series led by Adventist Church president Ted N.C. Wilson in the Historic Manhattan Adventist Church.

The woman left New York shortly after the meetings, moving to San Antonio in the U.S. state of Texas and getting baptized there. Today she is serving as a volunteer at an Adventist mission in Central America.

The woman doesn’t show up in church statistics as a baptism linked to NY13, a major evangelistic initiative held in New York and the surrounding metro area in 2013 that launched the Adventist Church’s “Mission to the Cities” program, which aims to share Jesus in the world’s largest cities. Yet she is among thousands of people whose lives were changed by NY13 and who have gone on to influence many others in New York and around the world, church leaders said.

“It is impossible to quantify with the use of statistics what God does in human hearts and how He changes lives when His Word is proclaimed and His message preached,” said evangelist Mark Finley, a leader of NY13 who related the story about the woman.

Judged only by the numbers, the results of NY13 appear modest, especially in comparison with subsequent evangelistic initiatives based on NY13 and held worldwide. Baptisms in metro New York (including portions of Connecticut, New York State, and New Jersey) totaled 5,293 for all of 2013, according to the Adventist Church’s Atlantic Union Conference, whose territory includes New York. Consider, however, the fact that New York is the largest city in the U.S., with 8.5 million people, and its population more than doubles to 20 million when the metro area in included in the count.

In contrast, a major outreach effort centered around a two-week evangelistic series in Zimbabwe in May 2015 resulted in 30,000 baptisms. The African country has a population of 14 million, about three-fourths the total population of metro New York.

New York Is a Tough City

But New York is not Zimbabwe. New York is considered one of the most challenging places in the world to share Jesus. It is a multicultural, fast-paced, complex city with people from all walks of life, from the extremely wealthy business executives to the down-and-out homeless, Finley said. It has the super-rich and the poverty stricken; the highly educated and the illiterate; the religious and the non-religious. Muslims, Buddhists, Hindus, Jews, Christians, atheists, agnostics, and the purely indifferent work side by side.

“The challenge for the Adventist church and Christianity in general,” said Finley, “is to develop a multi-faceted, comprehensive, sustainable approach based in local congregations that can reach people from more than 800 language groups for the kingdom of Christ in the context of a city where many are struggling for financial survival and worn down by the complexity of city living.”

Finley joined other Adventist leaders in tackling that challenge with NY13. Finley and his wife, Teenie, coordinated prayer rallies, organized large convocations, conducted lay-training events, and met with pastors and church administrators repeatedly in 2013. Their goal was to motivate, inspire, equip and encourage all areas of the church in New York to be actively involved in NY13.

Wilson, in addition to preaching in Manhattan, teamed up with Finley and Robert Costa, evangelism coordinator for the world church, to lead an International Urban Evangelism Field School, whose students from New York and church divisions around the world not only worked in New York but also took what they learned back to their home countries.

Donald G. King, president of the Atlantic Union Conference who oversaw NY13 as chairman of its coordinating committee, said the effects of NY13 continue to reverberate across the U.S. Northeast. The initiative brought churches and local conferences together in unprecedented ways, such as a first joint New York City camp-meeting attended by 13,000 people in June 2013. More than 1,200 community health workers and 1,500 Bible workers were trained for NY13, and they continue to assist local churches today, he said.

In addition, the 5,293 baptisms, an annual record for metro New York, led to the opening of 63 new churches and companies that year — a result that Finley called “extremely significant.”

“Here are 63 new beacons of light reaching out to their communities and making a difference for Christ,” he said.

Finley told of a Haitian woman who, after becoming convicted of the Sabbath by reading Adventist literature, began to pray that somehow she could find a Seventh-day Adventist church in her community.

“Providentially her community was one of those targeted to plant a new church,” he said.

She attended the evangelistic meetings, was baptized, and became a charter member of the new church planted there.

In another example, a forward-thinking university student at one of New York’s prestigious universities with some Adventist background attended the evangelistic meetings in Manhattan. His heart was touched, his life was changed, and he was baptized in the series.

“How can one really evaluate the result of this one life transformed for God’s kingdom?” Finley said.

A Bump in Members and Morale

Church leaders said it is impossible to calculate precisely how many people were baptized as a result of NY13. But G. Alexander Bryant, secretary of the North American Division, noted in a statistical report to the division’s year-end meetings in late 2014 that NY13 gave a “bump” to the entire division’s membership the previous year.

NY13 also brought changes to local churches, including a boost in morale to pastors and members, said Rohann D. Wellington, assistant to the president for strategic planning and communication director for the Greater New York Conference.

“They became energized and engaged,” he said. “Several were not active in evangelism in the past.”

Daniel Honore, president of the church’s Northeastern Conference, said NY13 gave his territory the highest number of baptisms that it had seen in nearly 20 years but, more important, dozens of missionary-minded members.

“The trained Bible workers continue to support evangelism efforts,” he said in a recent e-mail. “Those who engaged in medical missionary training are on fire for God, using the health message as an entering wedge. Just yesterday they conducted a training for healthy living for prison employees at Rikers Island.”

Honore said his conference replicated NY13 on a smaller scale in western New York State in 2014 and baptized nearly 500 people. He is now working with the Southern New England Conference to prepare for a major evangelism series headlined by John Bradshaw, speaker and director of It Is Written, in metro Boston in October 2016.

NY13 was followed by “Hope Manila,” a major evangelistic series resulting in some 10,000 baptisms in the Philippine capital in 2014. Wilson spoke at the main meetings in Manila in May 2014, and in Chitungwiza, a city near Zimbabwe’s capital, Harare, in May 2015. Months of preparatory work with Bible and health workers were conducted before both evangelistic series began, and scores of other meetings were held simultaneously at other sites.

“We have only seen the beginning of what God will do in ‘Mission to the Cities’ and in New York,” Wilson said. “The divisions around the world have taken this challenge by the Bible and the Spirit of Prophecy to reach the people where they are in the large metropolitan areas.” 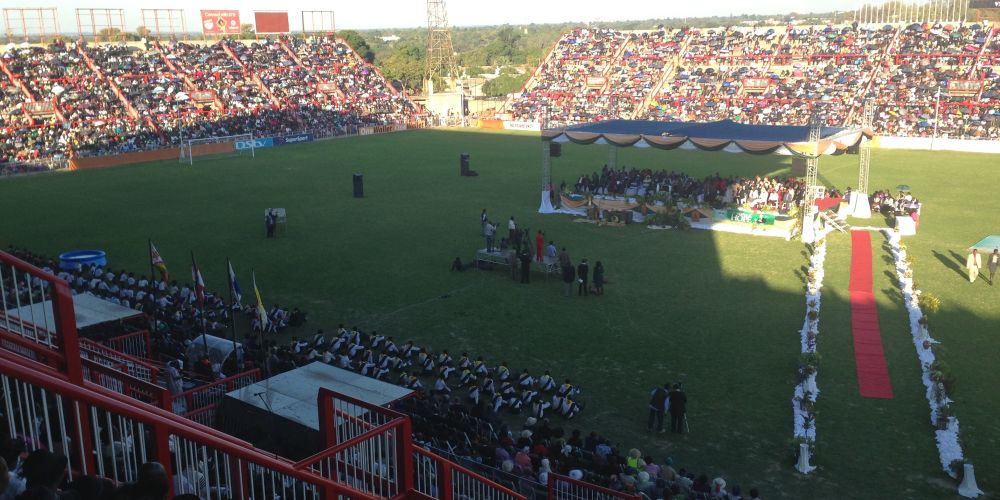 Zimbabwe’s 30,000 baptisms are an eye-catching example of a division’s work. It is a success story that Paul Ratsara, president of the Southern Africa-Indian Ocean Division, which includes Zimbabwe, credits to “God’s blessing, innumerable hours of prayer, and a lot of hard work.”

“Members are investing much of their personal time, influence and means to win souls,” Ratsara said. “They don’t wait for structured outreach events. This means that at any time there will always be many thousands of new souls ready to make a decision for Christ through baptism.”

He said newly baptized members are immediately trained to reach others for Christ in the division’s “Fishers of Men” program, and every member is encouraged to reach at least one person for Christ every year under another program called “One Member, One Soul.”

“We encourage the total participation of every man, woman, and child attending church,” he said. “Members are intensely interested in the success of God’s work.”

In an example of self-sacrifice, more than 1,000 volunteers from around Zimbabwe flocked to Chitungwiza to conduct community services and to knock on doors for the month leading up to Wilson’s series. These church members — the very lay people whom church leaders say are vital for fulfilling the church’s evangelistic and witnessing work — even funded their own expenses.

“We are achieving great things for God and there are greater things to come! God has promised this,” Ratsara said, pointing to John 14:12, where Jesus says, “Most assuredly, I say to you, he who believes in Me, the works that I do he will do also; and greater works than these he will do, because I go to My Father.”

While big baptismal numbers can be impressive, using them alone to evaluate evangelistic success is short-sighted and myopic, Finley said.

“God evaluates success by lives changed, hearts touched, church members motivated and equipped, new strategies launched, innovative ideas shared, churches planted, and men and women won for the kingdom,” Finley said. “One life changed and totally committed to God can make an eternal difference. Think of the apostle Paul: one life totally sold out for God, and he lit gospel fires throughout the Mediterranean world.”

Finley, an editor-at-large for Adventist Review, challenged the journal’s readers to find ways to use their talents to win people for Jesus.

“I long for every Adventist church to be a center of God’s redeeming grace making an impact on their community for Christ,” he said. “My prayer is that Adventists worldwide will use their creative capacities and God-given gifts to develop comprehensive initiatives under the guidance of the Holy Spirit to reach their communities for Christ.”