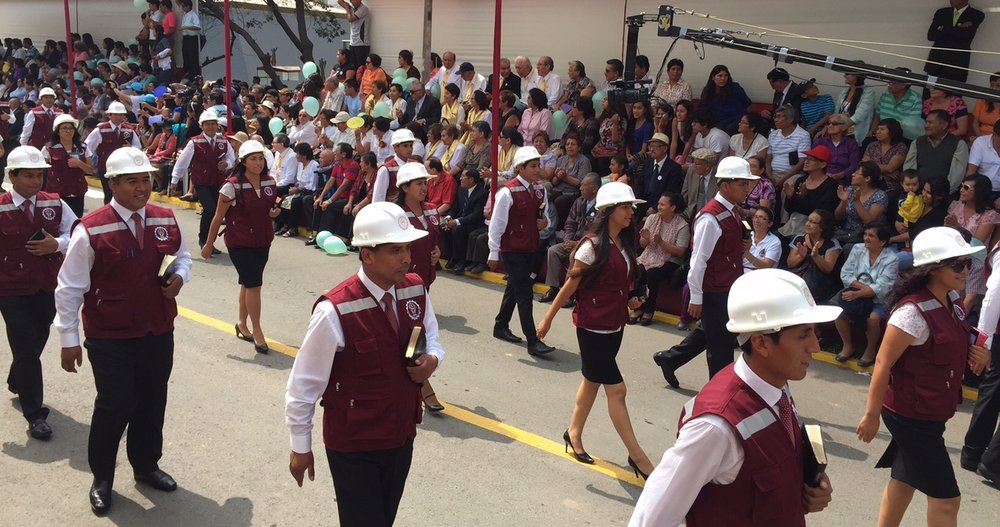 Adventist Church leader Ted N.C. Wilson has embarked on a South American tour that will see him speak 26 times in 11 days as he attends baptisms, parades, and building inaugurations from Peru to Easter Island.

The frenetic pace will keep up after the trip ends. Days after returning to Adventist world church headquarters in the U.S., Wilson will depart for a two-week evangelistic series in Zimbabwe.

The month of May might appear particularly busy for the General Conference president. But it is typical of the travel schedule of many Adventist Church leaders — although Wilson might be a little more traveled than some.

“I think Elder Wilson could well be the most-traveled General Conference president,” said evangelist Mark Finley, who has traveled to nearly 100 countries in his more than 45 years of ministry and has stood alongside Wilson at major evangelistic series, including in the Dominican Republic in January and Nicaragua in March.

No one keeps a tally of the miles that General Conference presidents have traveled, and the figure doesn’t seem important to Wilson, who has said his goal is to encourage church members in their preparation for Jesus’ soon coming.

“I am speaking at just about every meeting that I go to,” Wilson told the Adventist Review about his four-country tour of the South American Division that began on April 29. “I am scheduled to speak about 26 times on this 11-day itinerary.”

On Wednesday, Wilson was in Bolivia after already visiting Peru and Chile, including Easter Island. His last stop will be Brazil before returning to Maryland on May 9 to prepare for a May 14 departure for Harare, Zimbabwe.

TV Channel and Parade in Peru

Wilson kicked off the trip in Lima, Peru, with an April 30 visit to the new North Peru Union office, not far from Peru Union University, for the inauguration of the new Neuvo Tiempo (Hope Channel-Peru) media headquarters.

“This was a new day for media outreach in Peru,” Wilson said. “I am delighted with what God is doing through the creativity of our people in Peru to reach into the hearts and homes of people using every form of media.”

He noted that on the trip to the inauguration, his car passed a vehicle with a large sign on top advertising Neuvo Tiempo radio.

After the inauguration, he joined about 10,000 people at Peru Union University to watch an annual three-hour parade of Adventists from various organizations, local fields, unions, and schools.

“The parade demonstrates an opportunity for the church across the country to give God the glory for what He is doing in Peru,” Wilson said. “People are so excited about this event.”

Wilson then attended the dedication of a new building on campus and toured of the Seventh-day Adventist Clinica Good Hope hospital across town. 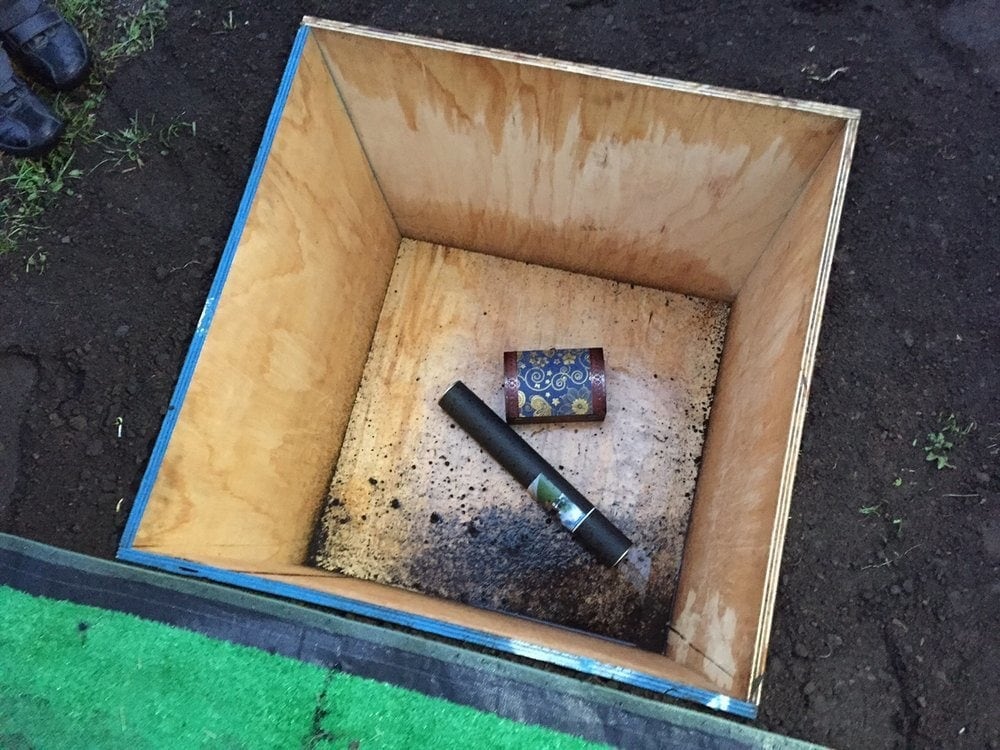 The next day, May 1, Wilson spoke at the inauguration of a new school and church in Talcahuano, Chile, built to replace structures destroyed by a deadly earthquake and tsunami on Feb. 27, 2010. The Talcahuano mayor joined hundreds of people at the ceremony.

From there, Wilson traveled to Chile Adventist University where, in an auditorium of the new university library, he and other leaders signed declarations about a planned new building dedicated to training student literature evangelists. The declarations and a copy of Colporteur Ministry by Adventist Church cofounder Ellen G. White were placed in a special glass-sided box that will be part of the cornerstone of the new building.

“Students will be able to view it in the ground and be reminded of the purpose of the building,” Wilson said.

On Sabbath, May 2, Wilson spoke at the inauguration of a newly constructed Concepcion Adventist Church that seats about 1,200 people. The original building on another site was destroyed by the 2010 earthquake. In the afternoon, he spoke at an evangelism and mission rally of about 5,000 people in Santiago. 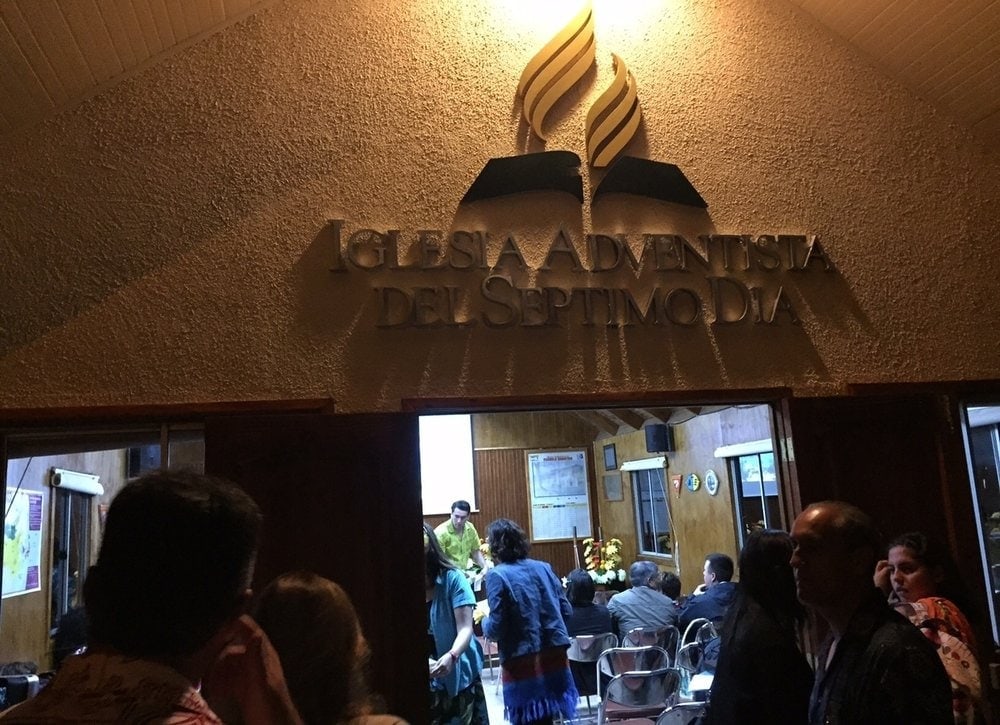 On May 3 and 4, Wilson visited Easter Island, one of the most isolated and remote places on the planet, located 2,350 miles (3,800 kilometers) west of South America and 1,350 miles (2,200 kilometers) southeast of Pitcarin Island.

Wilson participated in the baptism of four people on a beach overlooked by the island’s towering iconic stone statues. Forty-four Adventists now live on the island of about 6,000 inhabitants.

Wilson spoke at the small Adventist church for an evening service, which was broadcast for the first time on the radio in the local Rapa Nui language.

“It was a marvelous experience to be with our precious church members in this isolated place and to see their strong missionary spirit in bringing the three angels’ messages of Christ and His righteousness to the local population,” Wilson said. “This was truly seeing God’s power in one of the most remote places on this Earth.”