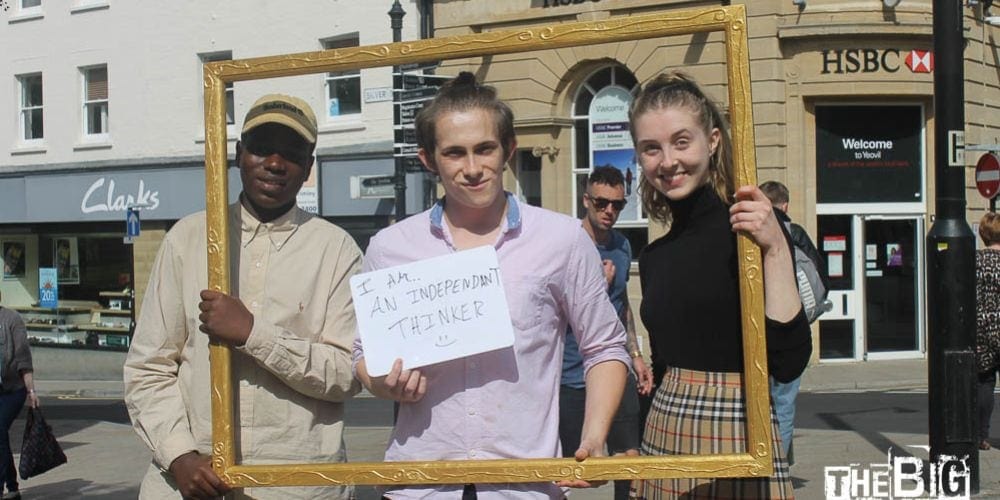 A group of Seventh-day Adventist teenagers took a large golden picture frame to a busy British street last Sabbath afternoon to challenge people to consider their greatest values as they posed for a photo.

The young people from the Yeovil Adventist Church in Yeovil, a town of 45,000 people located 130 miles (210 kilometers) from London, asked passersby to define what they saw as most valuable about themselves and to write the answer on a whiteboard.

“On a busy section opposite the main bus stop these intrepid young Christians pioneered a novel idea: to ask people what was valuable,” the British Union Conference said in a statement.

The passersby then held up the whiteboard as they posed behind the picture frame for free digital and instant photos. Each Polaroid-style print included contact details for the Adventist youth group, called “One Story,” on the back.

People offered a variety of answers to what they saw as valuable in themselves, beginning each statement with the words “I am …” Among the phrases were “I am super cool,” “I am funny,” and “I am epic!!”

One young man in a purple shirt wrote, “I am an independent thinker,” while a middle-aged couple wrote “We are kind.”

Some people enjoyed a light moment as they contemplated the serious topic. “I am the coolest kid in Yeovil,” wrote a young man who posed with two friends behind the frame. One of his friends held up a whiteboard reading, “I am enough,” and the other held a whiteboard with the wry statement, “I am having my photo taken.”

The Adventist teens posed with many of the passersby.

“We made some fantastic connections in the two hours we were on the High Street,” said Sam Gungaloo, pastor of the Yeovil Adventist Church. “God blessed us with goodwill from the public and affirmation from many of those who stopped to take a photo.”

One cafe owner was so impressed with the initiative, dubbed “The Big Picture,” that he and his staff provided free refreshments to the youth group on the warm summer afternoon of June 6.

The young people are eager to hit the street again.

“Yeovil needs to hear the greatest story of all time,” said Wayne Erasmus, a local pastor who wrote a report about the event for the British Union Conference. “Everyone needs to find their place in ‘The Big Picture.’ For some it may begin on the High Street with a picture frame and a Polaroid.”

A two-minute video of Adventist teens asking passersby to define what they see as most valuable about themselves in Yeovil, Britain, on Sabbath, June 6, 2015. Video courtesy of the British Union Conference