Breaking a Church to Grow It 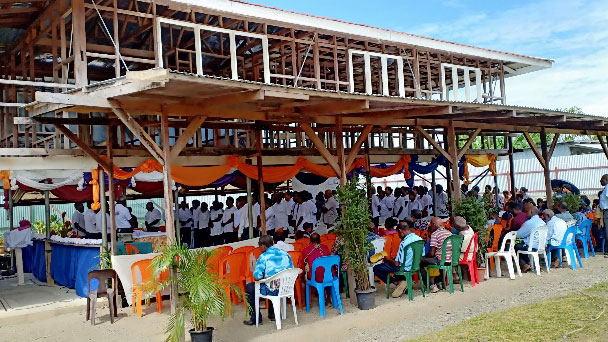 They’ve called it “break the church,” and it involves members moving out of the big church environment and forming smaller congregations.

It is what happened recently at Madang Town Seventh-day Adventist Church, with 69 of the 1,000-plus members forming a new congregation in the Jomba area. The group has now grown to 200 people, who worship each Saturday (Sabbath) under a house. This remains their place of worship until a new church is built.

On July 28, 2019, the group received church organization status, joining the sisterhood of churches in Madang Manus Mission. In a first-of-its-kind event, church status was granted to a group that is not meeting in a formal church building. More than 1,000 church members witnessed the occasion.

“[Church members] cannot continue to worship in a crowded church,” said Mission president Garry Laukei. “They need to have small churches so that there is an opportunity for participation and leadership.”

Laukei told members that although they do not have a formal church, having a membership of 69 baptized members requires organizing. It is something that would allow them “to continue with the good work you are doing while working on the new church building,” he said.

“Organizing a church is a sign of maturity and good leadership,” Laukei added. “The important thing is that we organize people for service, and later we can dedicate the building when it is ready.”

The growth in church membership is the result of a number of evangelistic meetings that have been taking place in the area along with the launch of Bible Discovery small groups.

“Jomba organized church will work closely with other sister churches and the local Mission to fulfill the mission of the [Adventist] Church,” he said. “It will not work in isolation.”