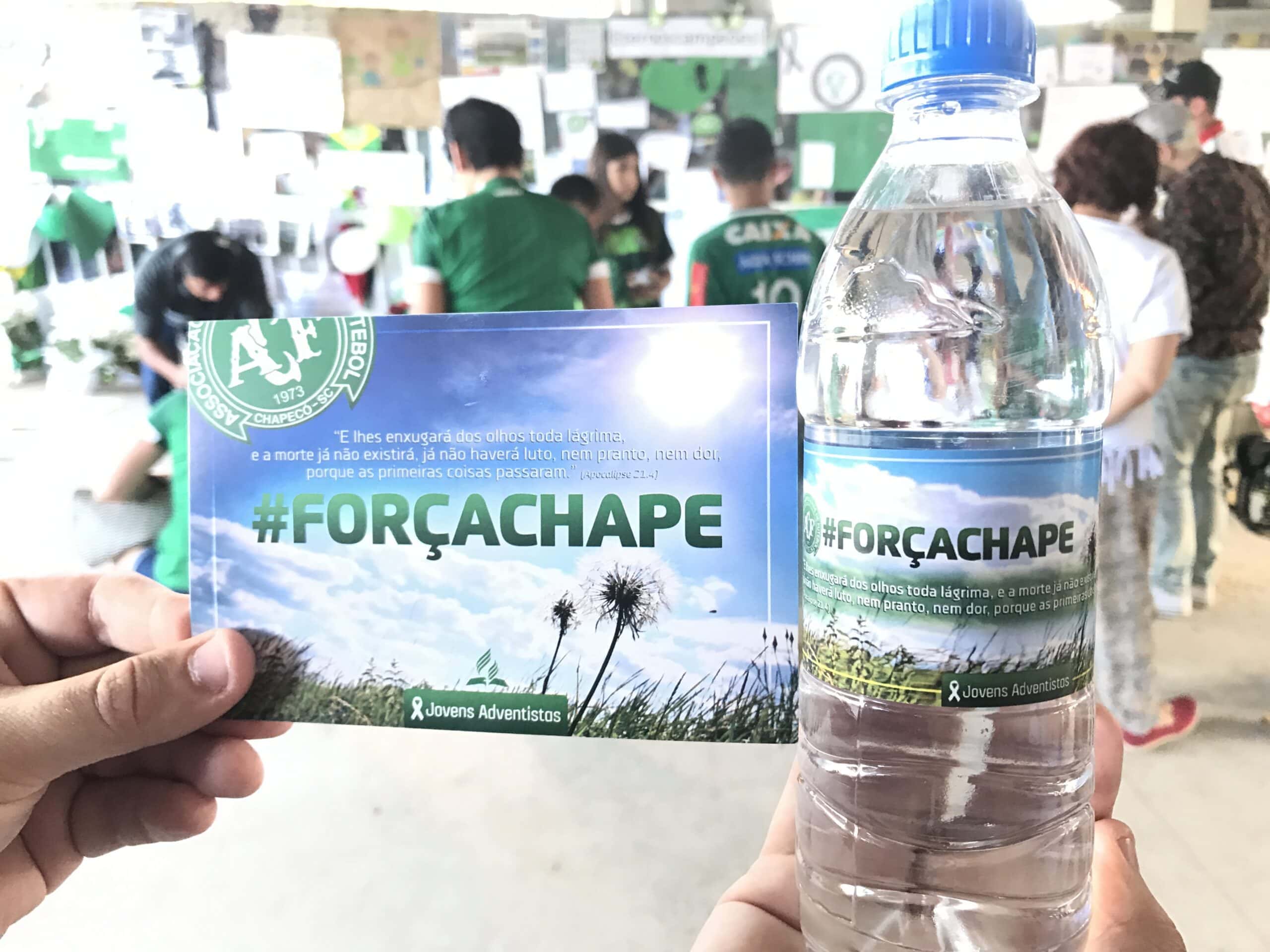 In the wake of one of the worst athletic disasters in recent times, the Nov. 29 airplane crash that killed most members and staff of Brazil’s Chapecoense soccer (football) team, Seventh-day Adventists in the area are reaching out to assist employees and fans left behind.
Adventist volunteers have flocked to Chapecoense’s stadium, located in the western part of Santa Catarina state, to dispense kits containing water bottles and a book of Bible-based thoughts. Families of the victims, fans, support staff and journalists have been among the recipients.

“We came to cheer for our team, but now we also want to share our sympathy,”

The chartered airplane carrying Chapecoense’s team to a final match in the South American Cup crashed before arrival at Medellín, Colombia, in the early morning hours of Nov. 29. The crash killed 71 people including players, coaches, management team, and media professionals.
On Saturday, Dec. 3, 100,000 people are expected to attend a public memorial service that will take place at Arena Condá, Chapecoense’s stadium. This will offer an even greater opportunity to serve, local Adventists said.
Practical actions by Seventh-day Adventists in the area are essential at this moment, said Pastor Moisés Móra, Youth Ministries leader in the region.
“We want to be relevant in bringing hope through our [actions and] attitude, and not [merely] through our words,” he said.

“What we need at this moment is acts such this, that make us feel loved and embraced,” said Marcelo Brisque, the team’s business manager, about the Adventist outreach at the stadium.

December 3 will be a challenging day. The victims’ bodies are expected to arrive in Chapecó early that morning, with the stadium open to the public at dawn. On the day of the funeral, Adventist members will place booths near the stadium, where they will provide electrical outlets for cell phone charging.
Among those served by the Adventist volunteers were visiting fans of Atlético Nacional, who came from Colombia to Brazil to watch the second match of the South American Cup final that was scheduled to take place in Curitiba on December 7. said Harold Balbin, one the Colombian team’s fans.
Expressions of Gratitude

On Friday, December 2, the Colombian Embassy in Brasilia invited a group of Seventh-day Adventists to an event, where the Adventists thanked the Colombian government for what they did in the aftermath of the accident. Adventist member Priscila Santana, sponsor of the Facebook page
Senhor, salve o Brasil ("Lord, Save Brazil"), organized the ceremony.

Musicians played Christian songs and two pastors expressed their gratitude in the name of the Seventh-day Adventist Church and of Brazil. Pastor Jaire de Oliveira said such gratitude is important. Pastor Rafael Rossi, Communication Director for the Seventh-day Adventist Church for eight South American countries, pointed out that Adventists are supporting the relatives of the victims in Chapecó with acts of kindness.