Book Presentations Turns into an Evangelistic Opportunity in Norway 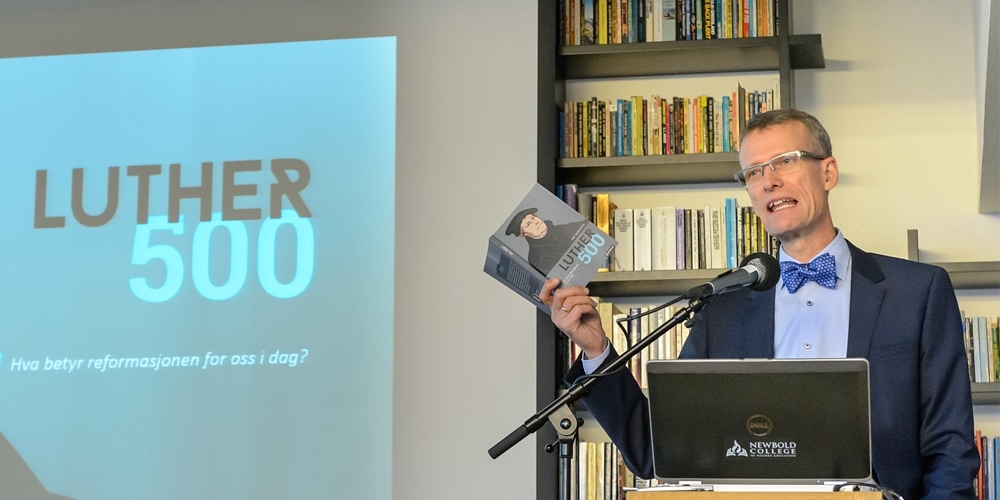 “It is more about evangelism than marketing for the publishing house,” said managing director of the Norwegian Publishing House Terje Dahl.

Giesebrecht’s book deals with topics that usually challenge the faith of many people, including Christians.

“If God is really the way some Christians portray him, then He is a moral monster,” said Giesebrecht, adding that such an image of God is very unattractive. “The idea of an eternally burning hell is not compatible with the Jesus of the gospels.”

Giesebrecht was not afraid to answer some very pointed questions: Do I have to believe in hell? Does God demand the sacrifice of humans? Was Jesus a fire-and-brimstone preacher?

Tjeransen spoke on Martin Luther. Dozens of people also listened to the topic “Corruption hunter by the grace of God.” He noted that today, we are still reaping the benefits of the bold way Martin Luther criticized corruption in Medieval society. “Even as we celebrate the 500th anniversary of the Reformation, the ideas of the Reformation must continue in contemporary society and still be inspired by the Bible,” Tjeransen said.

Attending the Oslo Book Festival was a new experience for the publishing house, but is seen as an important new step as Seventh-day Adventists in that northern European nation move to reach out to a wider public.

Dahl plans to build on what they learned this year in preparation for future participation. “The publishing house presented two titles that we believe the public should be aware of,” he said. Dahl sees these two titles as part of the publishing house assignment, namely, to stimulate faith. “Some people claim that the Reformation has no relevance in contemporary society. But we say, ‘Reformation is relevant and must go on,’” he said.

Dahl also highlighted the contribution of Seriously, God. “The book paints a picture of God that is more accurate than the image of God many have grown up with, and that some atheists present as a caricature,” he said. “When we see the image of God that Jesus gave us, we get a better understanding.”

Though no books were offered for purchase at the Sabbath presentations, they will be readily available in bookstores across the country.

Closer Look
Digging Deep and Finding Treasures
This book fills a significant void and offers readers a good entry point to better understand the profound connections of the texts of the Bible to their surrounding cultures.
Commentary
Child at Risk
At Christmas we remember how unequal the struggle looked when Jesus was born.