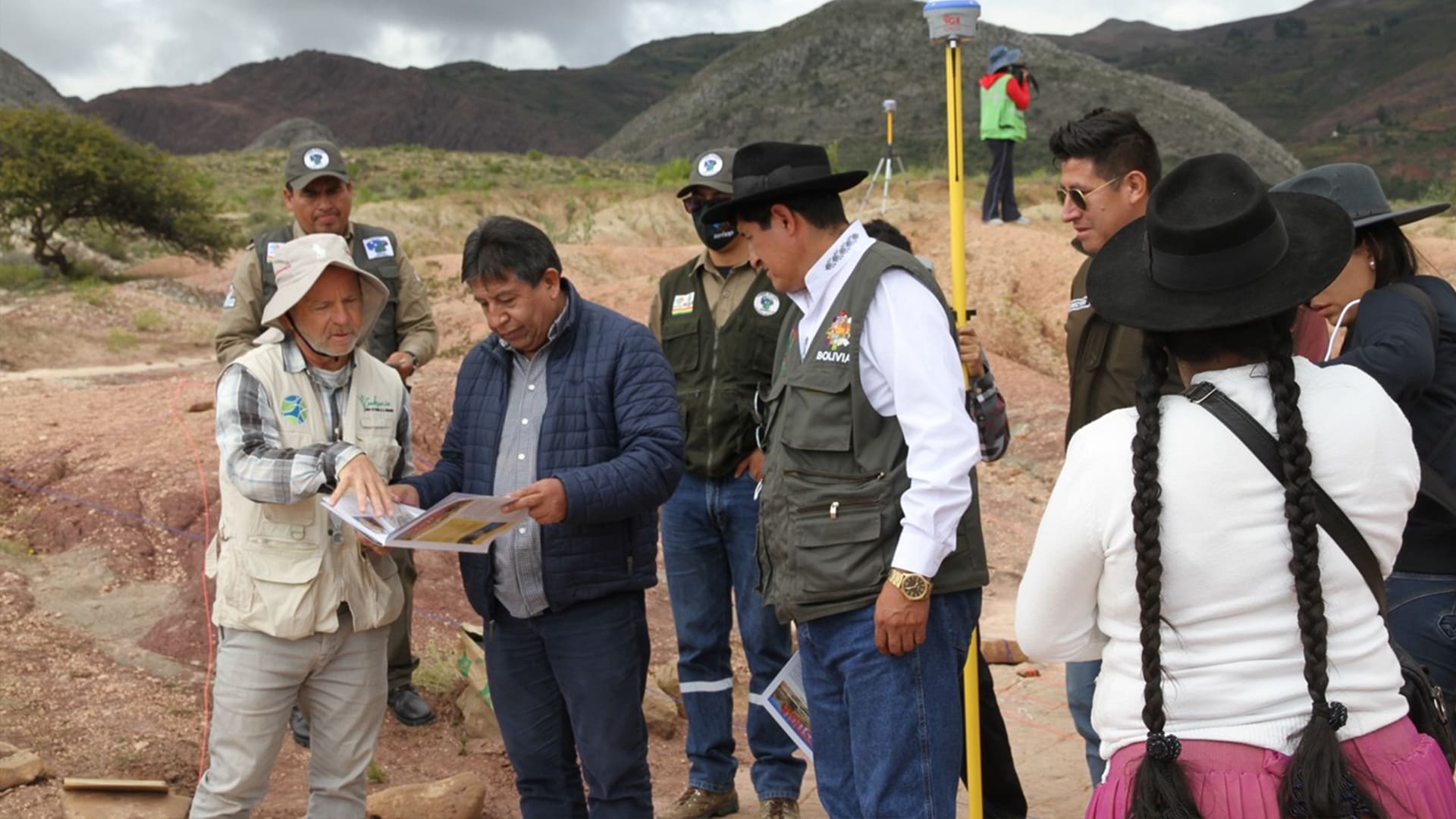 Bolivian vice president David Choquehuanca Céspedes visited the Geoscience Research Institute (GRI) dinosaur research site in Bolivia on March 22, 2022. Raúl Esperante, a senior scientist at GRI, was leading the research group at the site in Carreras Pampa, near the town of Torotoro.

This site contains what appears to be a world-record number of dinosaur trackways, along with other mysterious markings interpreted as tail drag impressions made by the animals as they walked. Esperante is working with Loma Linda University graduate students and local researchers as well as investigators from other South American countries.

“We gave the vice president and the group accompanying him — including Teodoreo Mamani, Bolivian National Park Service director — a 30-minute field presentation on the tracks and other features,” Esperante reported. “Both gentlemen were particularly interested in how the sites can be best preserved, and we discussed what has been done in other countries including the United States, Spain, and Italy. We also offered help in preparing signage and posters with explanations and descriptions for visitors to the site.”

Vice President Choquehuanca Céspedes was also interested in the training of Bolivian researchers. The position of GRI is that the best way to do this is through collaboration. GRI scientists are also interested in assisting in the development of new resources that contribute to the economic growth of communities. Likewise, it looks to ensure that Adventist researchers are mentored so that they can professionally investigate the evidence that sites like the one in Bolivia provide about the past. Because of this, the current research group includes two young Adventist Bolivian geologists, Helen Baltazar and Ángela Limachi.

As active contributors to the community of researchers at Loma Linda University, GRI reported that its scientists work closely with the university’s Department of Earth and Biological Sciences in teaching classes and mentoring graduate students. One of the students working on this project is Jeremy McLarty, who earned a master’s degree from Andrews University. “Studying dinosaur tracks in Bolivia has been an amazing opportunity for me,” McLarty said. “We have found things here that appear to be unique in the world.”

GRI also takes the position that sharing the research is a high priority. “Sharing some of the things we’ve found at our work site with the vice president and other visiting officials was an exciting experience not only for our group but also for the local park rangers,” McLarty said.

Why to Invest in Dinosaur Research

GRI, whose headquarters are located in Loma Linda, California, United States, is an institute of the Adventist Church dedicated to the study of issues related to science and faith. Studying dinosaur trackways in Bolivia is an example of the institute putting its mission into practice. According to GRI director Ronny Nalin, “There are profoundly different views of what happened in the past, and some interpret the evidence currently available in ways that contradict the record of history found in Scripture. GRI is interested in this research because it teaches us much about the primary evidence from the fossil record and the principles of interpretation that lead to various conclusions.”

CommentaryCovid 19
COVID-19 Can Affect Your Heart — Here’s What to Look Out for
A cardiac electrophysiologist explains the “why,” “how,” and “now what.”