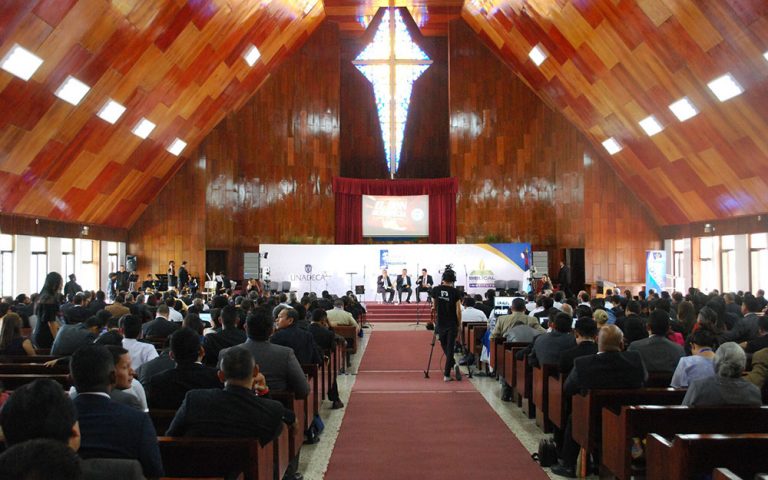 Hundreds of Seventh-day Adventist pastors and laypersons from across Central America gathered recently for a Bible and Gift of Prophecy Conference to reaffirm their commitment to upholding Bible truths as the only rule of faith and practice. They also were challenged to uphold the church’s understanding of the Spirit of Prophecy, manifested in the writings of Adventist Church co-founder Ellen G. White.

The more than 600 in attendance testified about how the Bible ranks the gift of prophecy among the gifts of the Holy Spirit destined to edify the Christian church, during the four-day conference held at the Central American Adventist University (UNADECA), in Alajuela, Costa Rica, April 25-28, 2018.

“It is the first such conference ever held for ministers and laypersons leading churches in Belize, Guatemala, El Salvador, Honduras, Nicaragua, Costa Rica and Panama,” said Franz Ríos, director of the White Study Center at the UNADECA campus and organizer of the event.

White Estate associate director Alberto Timm explained the connection between Bible truth and the belief in the Spirit of Prophecy. “The Bible is our only rule of faith and practice, and as Adventists, we do not have a creed — the creed is the Bible, and we accept the prophetic gift as a true manifestation of the last days,” he said. “We recognize the Sola Scriptura principle, that is to say, that the Bible is the exclusive authority to interpret itself.”

Timm emphasized how the church believes the historical accuracy of the biblical narrations, and that the Gift of Prophecy does not replace the Bible but “takes us back to the authority of the Bible.”

It’s about how God decided to communicate with human beings, said Elias Brasil de Souza, director of the Adventist Church’s Biblical Research Institute. “We believe in a God who communicates with us and uses the Bible to communicate His messages and the prophets as His messengers,” he said.

Pastor and laypersons were reminded not to run the risk of applying hermeneutical distortions when interpreting the Holy Scriptures and the Spirit of Prophecy from the pulpit such as reductionism, where only one point of truth is emphasized and that one loses the sight of the extent of the gospel message.

“As Seventh-day Adventists, we must be balanced,” added Timm. “Neither fanatics nor liberals, we must learn to distinguish between laws and norms, principles and advice, we must study the historical, grammatical and theological context of the Scriptures and the writings of Ellen G. White.”

One of the main concerns presented during the conference was the responsibility to reach and involve new generations of Adventist whose questions and challenges requires the church to make the prophetic ministry of Ellen G. White relevant.

Dwayne Esmond, associate director of the White Estate, said that “the new church generations, especially those born between 1990 and 1994 are very creative and innovative and need a different approach to the Spirit of Prophecy.” He added that they need it “not as codes that seek to change their behavior or lifestyle but as a source of inspiration that makes them relate more intimately with Jesus.”

Conference attendees were presented with survey results from a study done by Ríos of a group of 4,406 church members from across Central American countries in 725 churches on the behavior among church members who regularly read Ellen G. White writings and those who do not.

The results were very revealing, according to Ríos. “Some 61.1 percent of those surveyed admitted that they do not read the writings of Ellen G. White, and only 38.9 percent of church members in Central America read them regularly. Those who read have been members for more than 20 years,” stated Ríos.

The study also confirmed the positive effect of the regular reading of the Spirit of Prophecy writings, with 87.1 percent of the members saying that they had a better relationship with God, reported Ríos. About 82.6 percent recognized their spiritual gifts for community service better; 76 percent of those surveyed are more aware of the need of funds for evangelism and affirm that they are more prepared for witnessing; and 66.4 percent said they have family worship regularly, according to the study.

“We have failed the new church generations with the precious truths of the Spirit of Prophecy,” said Ríos.

The Bible conference brought out several resolutions as recommendations to church leaders and ministers across Central America. It includes dedicating one month every year to promote the reading of the Spirit of Prophecy across churches and small groups. It also asks for more readings through the church’s initiative “Revived by His Word” and “Believe His Prophets.”

Leaders also vowed to incorporate modern technological advances. “[We must enlist] digital technology to reach the younger generations with the message of the Spirit of Prophecy,” they said.