Bahamas: Singing and Praying in the Storm 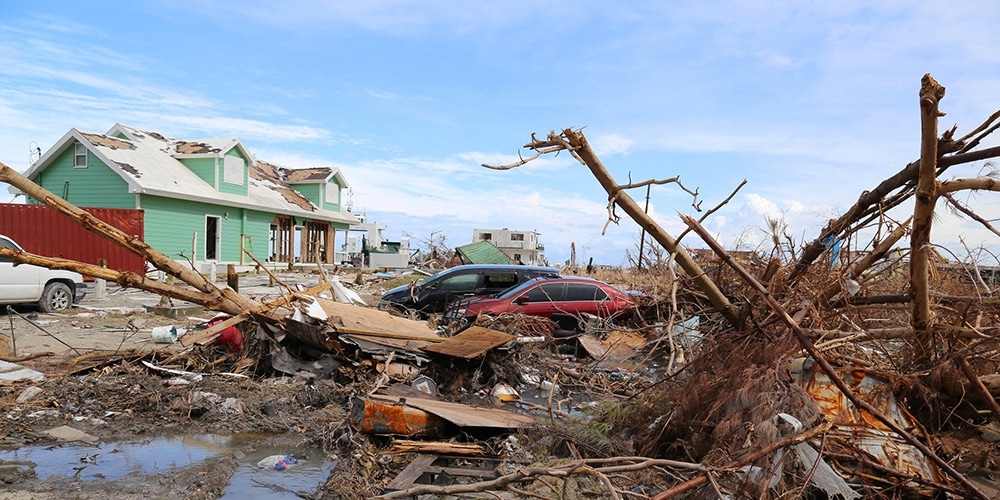 That was the sight that greeted Seventh-day Adventist leaders from the Inter-American Division (IAD) church region during a recent tour of the damage caused by Hurricane Dorian on the islands of Abaco and Grand Bahama.

Not Much Left in Abaco

“You look at it all and think, where to start? Where to rebuild? When will it be possible for them [the islanders] to restart their life?” said Elie Henry, president of IAD. Henry, along with fellow administrators, visited several church properties and members’ homes and businesses on September 15, 2019, in Marsh Harbour, the largest city on Abaco.

Leaders stopped to see Marsh Harbour Adventist church, which sustained extensive damage to its structure, including the roof, walls, and interior. Most of the church’s 250 members evacuated to Nassau or the United States, said Peter Watson, associate pastor for the Abaco district, who stayed behind to help in the relief efforts.

“Many people died here,” Watson said. “You saw bodies on the ground, and rumors of cholera began to spread, so people just started to evacuate as quickly as they could.” Watson said very few church members are left.

The Salem Haitian Adventist church, a wooden structure next to the Marsh Harbour church, was destroyed. The 120 church members had been working hard to build a new church on a property on a nearby hill, said Wilson Isnord, head pastor for the Abaco district. “The members were looking forward to finishing the church by December,” he said. The cement church seemed safe to many people who took shelter inside during the storm, Isnord explained. “But soon after the storm, eight bodies were found in the church. None were church members.”

“It is very sad to learn that a community of a lot of Haitian people lived right behind here … many looking for a better life, and their homes were wiped out,” said Henry, a native of Haiti. “We hope that those on the island can rebuild because where there is life, there is still hope. So we continue to hope the Lord, who spared their lives, will give them hope to rebuild everything and continue to witness of the goodness of the Lord.”

The trip was not only for the purpose of surveying the damage caused by the hurricane, Henry said. “For me, it was much more impressive to meet the church members and see the way they have great maturity in their faith. They understood how God saved them after they prayed to God for protection.”

Members Are Making a Difference

Nathaniel Hannah, who lives in the Spring City community, was met by the caravan of leaders who came to visit church members. “It was terrifying what we experienced,” Hannah said. During the storm, his wife and two children kept praying and singing hymns, he recalled. “A tree hit our roof, plywood started flying off, and the pressure we felt in the house was so powerful … it was crazy,” he said.

“When we felt a calm, we got in the car, kept singing, got out of the car with the help of a neighbor, and headed for shelter at a library building. There were many there taking shelter already.”

He has no electricity or running water in his home, but Hannah and his wife are currently living there. The children are in Nassau so they can go to school. “This is our home; I didn’t want to leave. God has saved us and will help us through this.”

Hannah is watching several of his neighbors’ homes now. Many have left but check in with him when they can. Visiting church leaders prayed with him and his family and delivered relief supplies.

The Abaco district is personal to Leonard Johnson, executive secretary for the IAD. “This is where I started my ministries as a young pastor for three whole years,” Johnson said. ”I got a sense of home as I listened and saw in action the work of Peter Watson and Isaac Collie — an Adventist lawyer, business owner, and Adventist-Laymen’s Services and Industries (ASi) coordinator for the union, though having experienced losses in terms of homes and businesses, are very positive, optimistic, and confident that the Lord will help rebuild again.”

“Listening to Nathaniel Hannah’s testimony and the others only underscores that we are a disaster or storm away from the possibility of losing everything, and our only trust and hope is really God,” Johnson said.

Looking at the extent of the damage in Abaco brought some concerns to Filiberto Verduzco, treasurer for the IAD. “This trip allowed us to let the church in the Bahamas know that we are with them, and this is the time to help our brothers and sisters in need, while quantifying ways in which we can help as a church.”

One-third of the financial support for the church in the North Bahamas Conference, which oversees Abaco and Grand Bahama, comes from the membership in Abaco, Verduzco said. “This definitely affects the operation of the local church,” he explained. “Our members are displaced, have lost everything, are not able to work, and they are not able to give to the church … but we have a great opportunity to help rebuild churches, help members so they can return to their island and can find normal life again.”

Verduzco said it is IAD policy to assist church members in rebuilding their lives in the wake of a natural disaster. The division sent funds to assist the union immediately after Hurricane Dorian struck, he explained. Three other IAD union church regions have already sent funds to help North Bahamas and other areas and have pledged to assist in the recovery as well.

“The Atlantic Caribbean Union is assessing the scope of their needs after the hurricane and will present us their plan to help in the rebuilding and relief efforts in the days, weeks, and months ahead,” Verduzco said.

Jose Alberto Rodríguez, president of the Adventist Church in Puerto Rico, took a team from a national television station in Puerto Rico to raise funds for those affected by the hurricane. “It’s hard to see the destruction in this place,” Rodríguez said. “My heart is moved by so many affected. We will continue to assist in relief efforts indefinitely.”

The union, through its Adventist Development and Relief Agency (ADRA) in Puerto Rico, has been sending funds every week since the storm struck, Rodríguez said. The funds are assisting feeding programs in Grand Bahama and those for victims who evacuated to Nassau from Abaco.