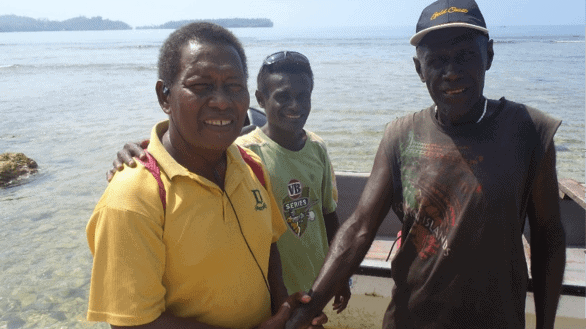 When Jack Meavana became a grandfather he was only expecting one baby—instead his daughter gave birth to two.

Jack and his family were not prepared for the birth of twins so he knew he needed to seek help. Jack lives on remote Choiseul Island in the northwest of Solomon Islands. His village, Vudutaro, is located only 400 meters from the Moli Catholic station so Jack’s first approach was to ask for help from his Catholic church. But the church wasn’t able to help his family.

Unsure of what to do next, Jack went to visit his two sons at Tetere prison, located on the main island of Guadalcanal.

Unsure of what to do next, Jack went to visit his two sons at Tetere prison, located on the main island of Guadalcanal. As he told his sons about the struggles back home, the boys had some advice for him. Contact a man named Sipae Anisitolo, they told him, and request his help. The boys explained that Sipae was an Adventist working on the island of Taro, but before he’d been transferred there, he’d led the prison ministries at Tetere. Both sons had become interested in Adventist beliefs through Sipae’s influence and thought he could help their father.

Jack wasted no time. He quickly travelled back to Choiseul Province and up to the northern tip of the island of Taro. Finding Sipae working in an electrical and solar power shop, Jack explained his family’s situation. Sipae listened earnestly to Jack’s request and agreed to help, promising to bring his fellow Adventist church members to Jack’s house the following Sunday. Content with the response, Jack went home with good news to share with his family. He was curious about the man who’d promised to help, but assured himself that if his sons trusted him, then he could too.

When Sunday arrived, Jack was up early and headed straight to the beach to wait for his new Adventist friends.

When Sunday arrived, Jack was up early and headed straight to the beach to wait for his new Adventist friends. As he waited, some of his Catholic friends passed by on their way to church and stopped to question him, asking him why he was on the beach. “I’m waiting for a group of Adventists,” Jack told them. “They’re coming to visit our family to provide help for my new grandchildren.”

His church friends were shocked. Many didn’t know how to take this news—an Adventist presence on the northern west side of their island was rare—and made sarcastic jokes about Adventists to Jack.

But Jack was patient. And sure enough, to the surprise of his friends, two boats filled with people appeared in the distance. When they reached the beach, men and women piled out, carrying loads of supplies. With a big smile and tears of joy, Jack shook their hands and greeted them. They had come!

Leading them back to his village, about half a kilometer inland, Jack was overcome with gratitude. Another wave of happy tears from his family greeted the visitors as they reached his house, and Jack made a decision: his home, from that moment on, would be open to Adventists. After all the gifts and supplies had been given, Jack took the members of Taro Adventist church to an area where he said they could build a church to conduct Bible studies.

Once the visitors had left, men, women, and children from Jack’s village flocked to his house, curious to see what the Adventists had brought for the twins. They were in disbelief to see so many gifts—so many, in fact, that Jack’s daughter felt sorry for the villagers. She decided to extend the blessings she’d received, sharing soap and other useful items with other mothers and their children.

Due to several commitments, the members of the Taro Adventist church had trouble finding a time to go back to Jack’s village and build the new church. But Jack was so enthusiastic about the project that he decided to go ahead without the members and built the church himself, with the help of his son-in-law.

That church building in the village of Vudutaro is now completed and plans are underway to dedicate the building.

“I often wondered how we could ever reach the northwest side of the island,” says Sipae, who never dreamed that the birth of twins would eventually lead to a new church. “But the way God works is amazing, and He can do anything for His cause.”