Attrition, Losses, and Growth Rates in the Seventh-day Adventist Church 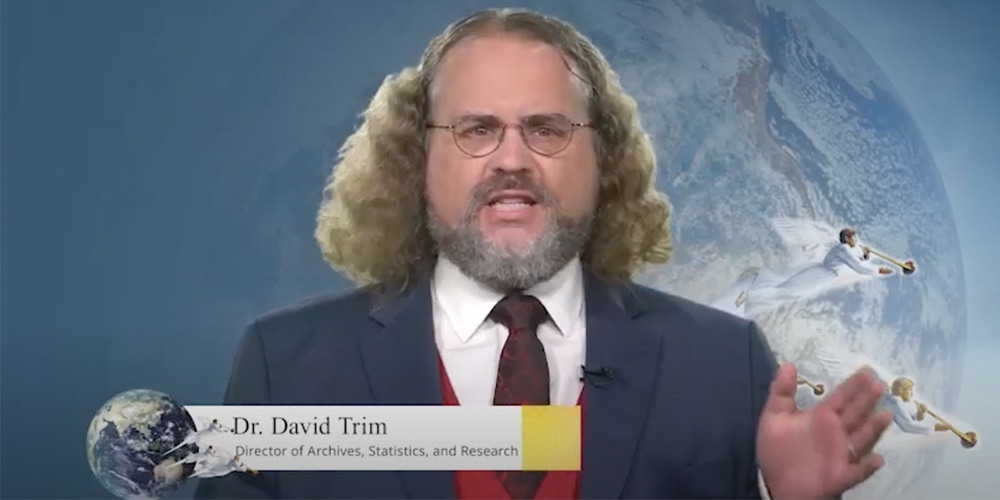 The link below is a video presentation by David Trim, director of the Seventh-day Adventist Church’s Office of Archives, Statistics, and Research (ASTR), during Annual Council 2020, as part of the Secretariat report to members of the General Conference Executive Committee on October 8, 2020. Below the link, the presentation’s transcribed text appears for reference, discussion, or eventual translation. Subtitles have been added to the video for clarity.—Editors

This short report focuses on two mission challenges [SLIDE 1], highlighting two trends that need to be overcome for this church to complete the proclamation of the three angels’ messages.

[SLIDE 2] The first is one that I have highlighted at Annual Council every year since I came to this position. It relates to attrition and loss. The second is an issue I touched on briefly last year but will explore more in this report: it is the leveling-off of growth rates, a trend which, if it were to continue, could have very troubling implications. So, the first mission challenge relates to reductions in membership — the second to what seems to be a diminishing success in adding members.

This first chart [SLIDE 3] shows accessions per annum in the 2010s. It is a crucial metric, and we will come back to it, but of course, it’s not the only metric affecting church growth. Compare these figures to those for losses in this chart [SLIDE 4], which shows losses for the same period and on the same scale. These are members who were dropped from membership, were identified as missing, or simply could not be accounted for in audits.

You will note the high numbers in the preceding quinquennium, as comprehensive membership reviews took place in many parts of the world, yet in mid-decade, that faltered. Thank you to church leaders who, in the last two to three years, have taken up membership review with renewed vigor. I want to pay particular tribute to our leaders in the Southern Asia Division [based in India], who are undertaking the first major, division-wide audit of membership.

[SLIDE 5] When church members turn their backs on their church and, as it were, hit the road, of course, it has an impact on growth. This chart illustrates that impact by charting losses together with net accessions. You can see how the losses literally undercut the gains. So much so that there are places in every division where church leaders prefer simply not to record the losses. But the people are leaving. Closing our eyes to that is no substitute for closing the back door.

Starting in 1965, the church counted not only baptisms and professions of faith but also losses. Thus we now have 55 years of statistics on losses. This is the fifth year of showing versions of the next two slides, but each year I update the data. [SLIDE 6] Since 1965, 40,421,554 people have been members of the Seventh-day Adventist Church. Thanks be to God. [SLIDE 7] Tragically, the number who have left since then has now passed 16 million, and our net loss rate has now ticked over above 40 percent. In the last 55 years, then, of the 40.4 million church members, at least 16.24 million have left.

So, there is the first challenge — reducing losses. Let us now turn to the second challenging trend: we are not having the evangelistic success that might be expected. Please be clear: I will be talking about decreases in accessions and accession rates, not about decreases in membership. But if the trend were to continue, it could have a significant, negative impact on growth — highlighting it now means the possibility of taking remedial action before the trend becomes serious.

This slide [SLIDE 8] shows the world growth rate for the past quinquennium. So on the face of it, there is an obvious problem. But ongoing comprehensive membership reviews distort growth rate — many of those taken off the books (or these days, off the database) actually left years, even decades ago. The most reliable metric we currently have is accessions, because we have confidence that baptisms, rebaptisms, and professions of faith are being pretty accurately reported — and of course, accessions are the headline in considering growth. So let's look at this chart again [SLIDE 9]. It shows actual numbers of accessions each year through the 2010s. There is considerable up and down in the annual figures for accessions. There is no trend of consistently increasing growth in the number of accessions. But the church is growing, increasing every year, and we might reasonably expect that net accessions would regularly be increasing, too.

Yet they are not.

And that becomes clearer when we look not at actual numbers but at rates of increase and decrease, and if we look not at 10 years but at 20 years, as in this chart [SLIDE 10]. Again, let me stress: we are talking about accessions, not about membership. And thus, what we see here is not a “growth rate” — it shows the percentage increase or decrease in accessions each year. There is considerable volatility, which is to be expected, but it is striking that, in 10 of 20 years, accessions were lower than in the preceding 12 months. And yet, remember, the church membership has increased in all 20 years. We might expect a couple of years in which accessions declined, but not 10 of 20.

Our success in soul-winning seems to be plateauing. We have more members than ever, but they are not winning noticeably more souls for Christ.

The Role of Church Planting

There could be many reasons for that. But one I want to highlight is related to what should be powering the world church growth: church planting. As we all know, the more local churches we have, the greater presence in a community we have; the more opportunities we have to help people “understand the Bible [and] find freedom, healing, and hope in Jesus.” Let me underscore [SLIDE 11] that in the next four charts, I will be giving figures for congregations, which is the combined total of local churches and companies.

This chart [SLIDE 12] shows a steady rise in the global number of congregations — again, this slide shows data for 20 years, and we see a steady increase. To God be the glory. But the chart shows the net numbers. We get a different picture when we look at the rate of increase in the total number of congregations — [SLIDE 13] what we might call a congregational growth rate, which you see here. What this chart shows is that in the last 20 years, there has never been a year in which the number of congregations declined, but that the rate of increase has steadily declined. Now, this is a correlation. It is not clear that the slowing of church planting is the cause of the plateauing in conversions. But it certainly can’t help.

I suggest, however, that there is a twofold problem. First, church planting needs to be strengthened — and indeed, it is emphasized in the “I Will Go” strategic focus. But second, congregations need to become more effective in outreach.

[SLIDE 14] This chart shows the number of accessions per congregation, again for the last 20 years. In 1999 each congregation, on average, added 12 new members. That reflected, I am sure, the impact of the various Net series. Since 2008, the accessions per congregation has hovered just above or just below eight. What is the trend? [SLIDE 15] This chart takes the same data but shows a logarithmic trend line. The direction over the last two decades is plain.

Here is one last indicator. [SLIDE 16] This chart shows accessions per pastor each year for the same 20-year period. The dark blue line shows the average number of accessions per ordained pastor; the orange line shows the average for all pastors, ordained, commissioned, and licensed combined. The trend line here would also be down, though less markedly down than for accessions per congregation. And it is notable that there are encouraging spikes in the 2010s. But again, though we have more pastors than ever, they are not, it seems, winning ever more souls for Christ.

Now, again, there could be a number of reasons for all the data and analysis I have shared. But it does prompt me to ask two questions; they both relate to both the challenges I have discussed: first, are we giving our local church members effective training in wholistic disciple-making? And second, is it possible that we, as church leaders, have simply come to take growth for granted — have we become complacent? These data tell us that there is no room for complacency.

Mission Has Not Changed

As I conclude this presentation about mission challenges at an Annual Council with the theme “Proclaim the Three Angels’ Messages,” as a historian, I cannot but say, in 166 years there has been no change in our mission. [SLIDE 17] I am going beyond the data now. Still, I want to suggest that wholistic discipleship and disciple-making will help us resolve both problematic areas because it includes nurturing and retaining members and motivating them to reach out to others — to share with them the prophetic truths that point to Jesus Christ and that are epitomized in Revelation chapter 14.

That is our mission.