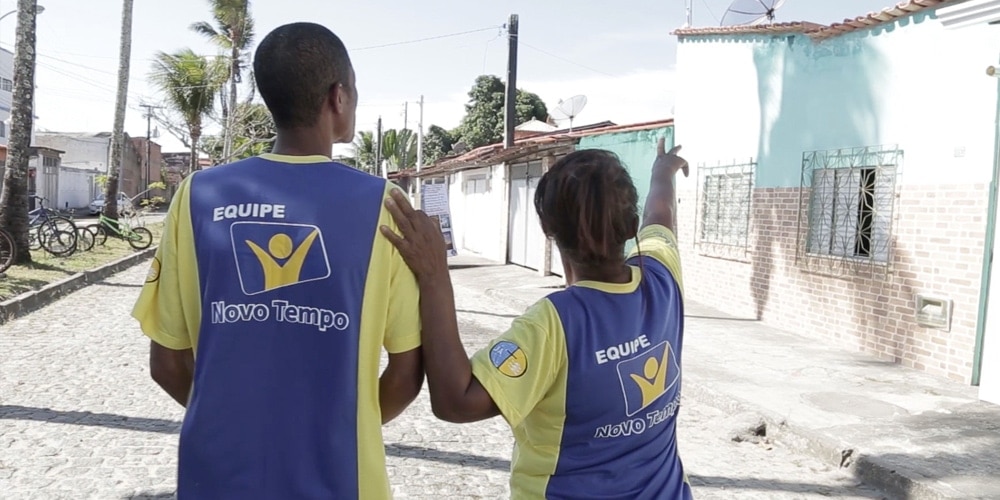 The work of church members in a Brazilian town is thought to be responsible for the increasing reach of the TV Novo Tempo Adventist network in the area, regional leaders said. These volunteers, who have become known as “antenna hunters,” are going door to door to introduce viewers to the Seventh-day Adventist television network in the region.

The project was implemented in Canavieiras, a town of 30,000 in the northeastern state of Bahia. The town is known for its natural and historical attractions, and it has five Seventh-day Adventist congregations.

Since 2016, TV Novo Tempo has been used more actively as a tool to increase biblical knowledge in the region through varied programming that promotes quality of life and positive values. Although it is not yet offered on over-the-air television signal, viewers with cable and satellite television service can view it, as well as on the internet.

According to local pastor Weslei Fernandez, referring to data from the Novo Tempo Network Bible School, 302 Canavieiras residents requested Bible studies after watching the Adventist channel in 2018. The local Adventist community wanted to move one step further, however, going beyond a 1-percent reach of the population.

“When you take a walk down the street, you can see there are many antennas and satellite dishes over the neighborhood rooftops,” Fernandez said. “We wondered, ‘Where are these people who have not yet met or did not get in touch with TV Novo Tempo?’ Out of it, we came up with the idea of going out to meet them.”

The 2018 brainstorming session resulted in the “Antenna Hunters” project. Volunteers, adequately trained, in uniform, and with informative pamphlets, go door to door to introduce the TV network to residents who have antennas or satellite dishes on their rooftops.

“We go out in pairs down the streets, searching, hunting for antennae. When we see one, we go to that house and knock on that door, introducing ourselves as part of the TV Novo Tempo team,” Fernandez said. “We ask residents if they know the free TV channel with programming for the whole family. If they allow us, we can even get into the home and teach them how to tune in their devices to our channel.”

From Viewers to Church Members

The service of “antenna hunters” goes beyond that first contact, leaders said. After the initial visit with prospective viewers, volunteers return days later to get feedback from the house residents.

“We go back and ask how they are doing and what they think of TV Novo Tempo,” said project coordinator Jorge Mendes. “We develop a friendship until, hopefully, the person requests Bible studies.”

Currently, volunteers have added dozens of viewers who are being visited. Many of them are receiving Bible studies, and several are attending church. Thanks to the “antenna hunters,” seven people have been already baptized.

Patrícia Santos and her husband are two of the people baptized after the work of “antenna hunters.” Now both are part of a volunteer team.

“TV Novo Tempo brought a lot of positive change into my life,” Santos said. “Even though I was a Christian, I did not know the Word of God in depth. Now, after meeting Jesus, I go out seeking others who could also wish to know Jesus better.”

For Fernandez, the primary goal of this initiative is to bring hope. “We wish to reach as many people as possible with the hope of Jesus’ return,” he said. “If at first we cannot take them to church, we take Jesus to the homes of these people, thanks to our TV network.”

Headquartered in Jacareí, São Paulo, Brazil, TV Novo Tempo is currently available as an over-the-air channel in more than 500 cities across Brazil. Its programming includes news and interviews, as well as children’s, music, health, family, culture, and education shows.