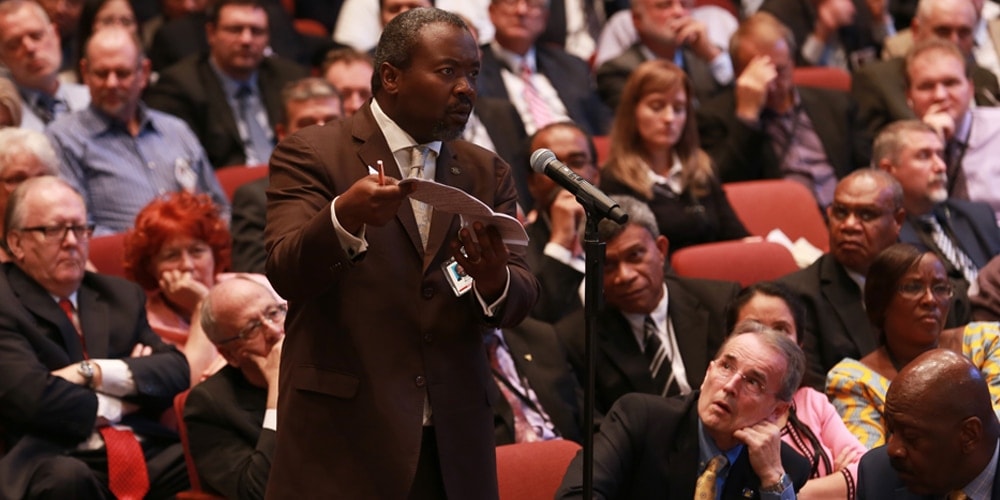 Following nearly six hours of discussion and debate, a majority of members of the Executive Committee of the General Conference (GC) of Seventh-day Adventists voted during their Annual Council meeting to send a document entitled Procedures for Reconciliation and Adherence in Church Governance: Phase II, back to the Unity in Mission Oversight Committee for further review.

“The body has spoken,” said Ted N.C. Wilson, president of the Seventh-day Adventist Church. “It will go back to the committee. By God's grace, we will find a way of bringing something together again.”

The Scope of the Second Document

The document outlines the second phase of a process of reconciliation voted during last year’s Annual Council that sought to initiate standard procedures for maintaining church unity in matters involving non-compliance. Areas addressed include Fundamental Beliefs, voted actions or working policies of the church. Phase I, voted at the 2016 Annual Council, sought to provide a “pastoral” approach involving dialogue and a greater understanding among those involved.

The Phase II document emphasizes the Executive Committee’s commitment to “preserve the governance and organizational structure of the Seventh-day Adventist Church on all levels” in the context of “godly forbearance, Christian charity, and redemptive grace.” Introductory paragraphs also highlight a commitment on the part of the Executive Committee to “the continued forbearance and discussion process” which offers “additional time to find solutions.”

“I believe that the church has been forbearing,” said Wilson during the day’s discussion. “Our purpose is to redeem. But we have to respect what the world church votes.”

The Phase II document that was referred back to the originating committee also makes an unapologetic case for the need of church policy, anchoring its roots in biblical references, along with principles articulated by Church co-founder, Ellen G. White. “Throughout scripture, organization has been a priority for God’s people,” says the document. “Church organization is also a clear biblical mandate and foundational biblical teaching for God’s end-time people.”

While recognizing that “the policies of the Church are not infallible,” the document explains that policies offer “the best judgment of a representative group of Church leaders at a given time on how denominational entities live and work together.” The General Conference Working Policy is the result of votes taken by representatives from around the world during either the General Conference in session every five years, or during the annual meeting of the Executive Committee.

The Phase II document is built on existing voted policies such as B 15 05, which clarifies “the authoritative voice” of General Conference Working Policy and B 15 10, which requires global adherence to Working Policy. The document recognizes “non-compliant practices can be very complex expressions of cultural, ethnic, theological, communication and economic values, beliefs, and practices,” and “differentiates non-compliant practices into three categories.”

Background to the Document

An introductory report was given by Thomas Lemon, GC general vice president, and chair of the Unity in Mission Oversight Committee. Lemon was charged with facilitating follow-up to the voted 2016 Unity in Mission document. “We took the process that you voted last year as a pastoral mandate, an opportunity to engage with people all around the world,” Lemon explained.

Lemon said while there are compliance issues, he saw “no sign of rebellion” in his interactions with the entities he engaged with. “Unity and the commitment to the message of the Seventh-day Adventist Church is as strong as I have ever seen.”

Prior to discussion from the floor, G.T. Ng. GC Executive Secretary, explained that while the document addresses the matter of the ordination of women to ministry and “was triggered” by the issue, it is much broader in scope, and “it is about governance.” Ng reminded members that “personal conscience is not on trial, but church governance is.”

Comments from the Floor

Discussion of the proposed document began with Wilson reminding committee members of decorum. “We will begin our discussion in the spirit of charity and respect,” explained Wilson.

The 14-page document was read aloud by Hensley Moorooven, GC associate secretary. The Committee members and invitees then addressed comments to the chair from various microphones on the floor, in the order which they scanned their badges in a system logging comments.

Comments were diverse and varied in their perspectives on the material in the proposed document. Both Church leaders and lay committee members from around the world spoke openly, and at times passionately, in favor or in opposition to the document.

Some urged the Committee to approve the document and move forward, while others supported referring the document back to a committee for further refinement. Those supporting referral raised questions about the constitutionality of certain segments of the document. Still others asked for refined language in the Phase II document.

One thing was clear. Despite strong convictions on both sides of the matter, no one suggested a split within the Seventh-day Adventist Church. “I want to give this body some assurance,” said Dan Jackson, president of the North American Division. “We have absolutely no intention to split the Adventist church and to start our own church in North America. We will not split from this church. We are committed to the work of this church both in North America and around the world.”

Noting the item will not come up for discussion by the Executive Committee until the 2018 Annual Council, Wilson said that “we still have the challenge of those who are not in compliance. So, pray for those of us who need to work on that. And try to encourage compliance,” he urged members. “We will hope to come back with something that helps all of us toward our goal of mission.”