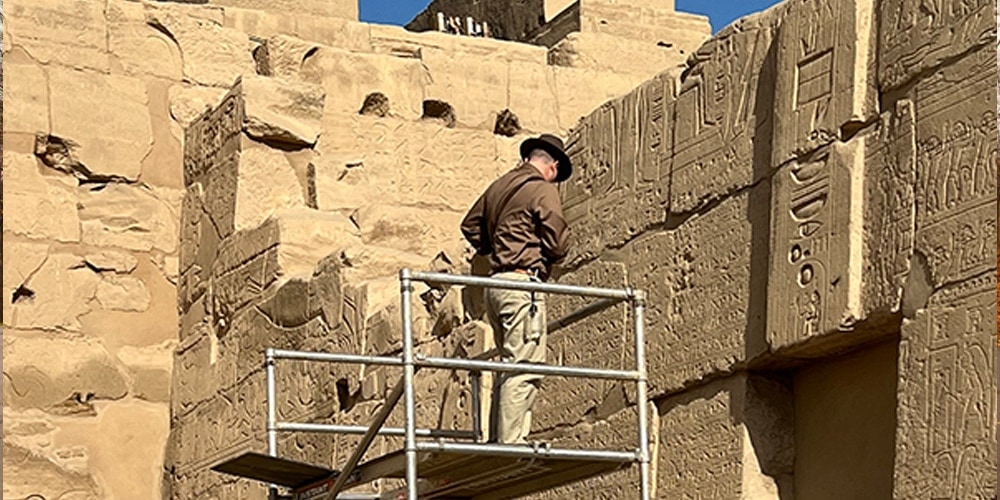 An Andrews University staff member and archaeologist recently spent two weeks as an expert field epigraphist, carefully documenting each hieroglyph from one of the most famous inscriptions in Egyptian archaeology.

L. S. Baker, Jr., associate director of Andrews University Press, was part of a field project in December 2021 to Luxor. The site, known to the ancient world as Thebes, the capital of Upper Egypt, is home to the Karnak Temple Complex, including the Great Hypostyle Hall. In cooperation with Egypt’s Supreme Council of Antiquities, archaeologists from the University of Memphis in Tennessee, and the University of Quebec in Montreal, joined recently by Mark Janzen from Louisiana Christian University and a team from Lipscomb University, have been working on the Karnak Great Hypostyle Hall Project. The long-term initiative uses the latest technology to record in the highest detail the thousands of inscriptions and reliefs carved on the walls and columns of the giant complex.

Baker said that Janzen’s team is specifically tasked with accurately recording the wall reliefs relating to one pharaoh’s battle conquests of the southern Levant in the thirteenth century B.C. In the middle of those reliefs is the famous, and earlier, Hittite Treaty originally inscribed under Ramesses II. Egyptologists have analyzed that treaty for generations since its discovery in the early nineteenth century. It is celebrated by historians as the oldest known peace or alliance treaty between major world superpowers. A facsimile of that treaty is prominently featured in the United Nations building in New York.

Baker was specifically assigned the section of wall containing the Hittite Treaty. He has been tasked with helping produce, with the help of computerized photogrammetry, the most detailed renderings of each hieroglyph (character).

“Through the generations since the treaty was discovered, there have been many renderings of varying accuracy and quality,” Baker said. “These have been the basis for the standard published transliterations and translations of what the treaty says. Standard photographic techniques cannot discern some of the imprecision of the characters because of the challenges of light and shadow and the wear and tear of time.”

According to Baker, it is unlikely that the team’s work on the Hittite Treaty will result in any serious changes in translation or a new understanding of its content. “But it will be the most exact recording of the hieroglyphic inscriptions ever produced,” he said, “and probably will be the standard state-of-the-art source for Egyptologists and historians for years to come.” He noted that in his work, he has already found several inaccuracies, albeit minor, from previously published works.

Baker said it has been an honor to be so “up close and personal” with such a famous element of historical understanding. “So there I am, 15 feet [5 meters] up on a scaffold, working just inches away from the delicate and faded lines of this incredibly important inscription from ages past. I guess it might be like an art historian from Andrews being nose to nose with the Mona Lisa in the Louvre to analyze and record the brush strokes on Leonardo da Vinci’s famous painting.”

Randall Younker, director of the Institute of Archaeology at Andrews University, said, “We’re always proud to add a feather in our cap when one of our own gets invited to participate in such a prestigious enterprise. We congratulate Dr. Baker.”

Baker earned an M.A. in Egyptian archaeology from University College London in 2011 and a Ph.D. in Ancient Near Eastern archaeology from Andrews University in 2019. For his dissertation, he studied the design and materials used in the construction of the Hebrew wilderness sanctuary in relation to Egyptian material culture and design in sacred, domestic, and military life. In 2015 he authored Land of Rameses, a historical novel about Moses and the Exodus. In his role at Andrews University Press, Baker is managing editor of the Andrews Study Bible and the Andrews Bible Commentary. The Old Testament volume of the Commentary project was released in 2020, and the project will be completed with the rollout of the New Testament volume in the summer of 2022.

Andrea Luxton, Andrews University president and chair of the Andrews University Press Board, said: “We’re proud of Dr. Baker’s growing contributions in his academic specialty and also for his outstanding work in helping to bring the Commentary project to completion.”

The original version of this story was posted by Andrews University.

Letters
Inbox
A Multimedia Review | During the Internment of Japanese-Americans | The Lab of New Things | Return to Normal | Misreading Scripture With Western Eyes
Release
Andrews University President Announces Retirement
It will be effective June 2023, Andrea Luxton said in a university board briefing.