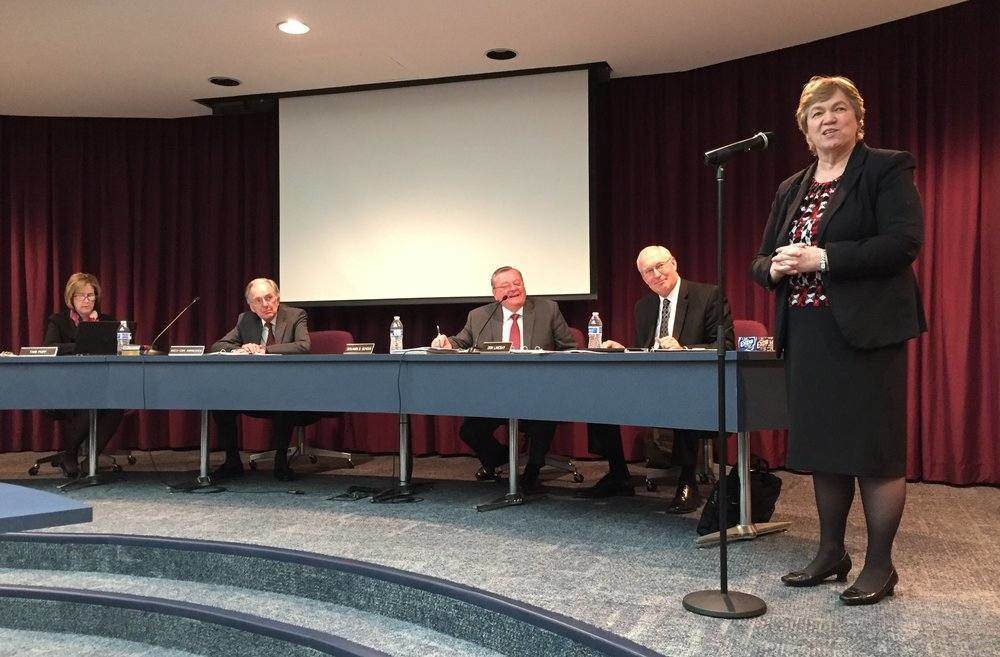 Andrea Luxton, president-elect of Andrews University, found herself at wit’s end several years ago while working as an educator in Europe.

“I had to deal with a very challenging situation that left me totally drained,” Luxton said. “The period ahead looked very bleak, and I just wasn’t sure I had the strength left to deal with it. I needed some help.”

So she decided to travel to the southern coast of Spain during a school break.

For a week she walked the beaches, prayed, read the Scriptures, and walked some more. She had a flight home after about five days but knew she wasn’t yet ready to return. So she changed her flight and kept walking and talking to God.

It was then that she found peace of mind.

“I haven’t been back to that place since, but I think even now I could find the bench I was sitting on when I suddenly felt the calm I had been praying for over the last week,” Luxton said. “The voice of God was very clear: ‘Don’t be fearful. You will get through this because I am walking with you.’ And that really was it. I flew home and that peace didn’t leave me once in the challenging months ahead.”

Luxton has faced many challenges during her tenure as president of two Seventh-day Adventist colleges — Canadian University College (now Burman University) and Britain’s Newbold College of Higher Education — and she is preparing to address new ones when she takes the helm of the church’s flagship Andrews University in Berrien Springs, Michigan, in June.

The university named Luxton, its provost since 2010, as its next president on Feb. 29, replacing Niels-Erik Andreasen, who is retiring after 22 years.

“Andrea has a good grasp of the current needs of Andrews University while also being a person who is trusted by church leadership,” Benjamin Schoun, chair of the Andrews presidential search committee and chair of the university’s board of trustees, told the Adventist Review.

He said that Luxton has demonstrated in her leadership a courage to make difficult decisions while still being diplomatic, affirming, and faithful to that which is right and to the values of the Adventist Church.

Schoun identified Andrews’ challenges as an “immediate need to be flexible to adjust to changing demographics and new methods of education delivery.”

Luxton, who said she would present her vision for the university in a few months, indicated that she was ready to tackle any difficult decisions with God’s guidance — much as she did on that Spanish beach years ago. Indeed, she even suggested that she embraces challenges because they tend to grow faith.

“There have been a number of times in my life when I found myself with questions that could only be answered by deepening my faith and capacity to live at peace with the unknown and uncertain,” she said. “Those are the times when I would say I have increasingly found God — His compassion, generosity, and abiding love.”

Luxton, a dual British-Canadian citizen who was baptized at the age of 14, spoke in a wide-ranging e-mail interview about her desire to promote Adventist education as a life-changing experience worth any sacrifice, her fond memories of playing teacher to 300 buttons as a small girl, and why Psalm 139 is her favorite passage in the Bible.

Q: What vision do you have for Andrews University going forward?

A: I really want to roll out my vision for Andrews a few months from now. But I will say a few things. Andrews has always had a national and international mission and footprint. With the current global environment, the need for the university to re-envision itself as a true global university is vital. This will look different from the past, but with all the new modalities of education open to us, it still needs to be part of who we are.

Andrews also needs to be responsive to the current pressures on particularly 18 year olds to get a cheaper education, say at community colleges. We need to find ways to say that what we offer is a truly life-changing and faith-affirming experience that is really worth any sacrifice. I think Andrews has a huge amount to offer. We need to find a way to break through all the communication chatter to get that message clearly out to those whom we can serve.

Q: What about Adventist education and Andrews University keeps you up at night?

I think the challenges of Adventist education differ in various parts of the world. I would say maintaining unapologetically an Adventist and Christian ethos is one that in different ways impacts all of us. For some, the challenge comes with the large number of non-Adventist students or even staff and faculty. For others, it is the challenge of living in a secular environment where Christian and Adventist education is somehow perceived as second rate or compromised because of its faith perspective.

Some Adventist families also struggle to send students to Adventist schools as they don’t have the money. Some are new Adventists and don’t understand fully the vital nature of Adventist education, while others wonder if Adventist education is really value added and think that maybe the local church can do just as good a job of faith development.

At Andrews, we are blessed to have some amazingly talented and committed students from the U.S. and internationally. However, there are many others whom we would like to see join us and are heading to public universities because they feel they cannot afford Adventist education or because they don’t believe we are delivering what they need. That is sad because I think they are missing a tremendous opportunity.

Q: How would you like to see those challenges resolved?

The solutions are not easy or always apparent. I think what we — the Adventist education system — have to do is:

Q: Could you share the most serious challenge that you have faced in Adventist education and how you resolved it?

There are many individual challenges I have faced. But one challenge keeps repeating itself in different forms, and I can’t say I have resolved it permanently — just shorter term for some people.

As I mentioned, I think one of the biggest challenges for Adventist education is that people just don’t believe it can make a difference. The rumors of all that is wrong tend sadly to be shared more rapidly than the rumors of what is right. And this can be a huge problem. If rumors are believed, they can discourage others from accessing what might well be a wonderful educational experience.

What to do? I think we have to keep spreading the good news — and faster than the false rumors. We have to show that we will listen to real problems and solve them. And we have to call out the false information when we can.

So putting all that together, I have found in some situations that we have been able to turn a dropping or low enrollment around just by engaging in a lot of proactive communication: getting the right message out, and inviting people to be partners in bringing success to the institution.

Q: What is your brightest memory from childhood?

I grew up in a small village in England called Whitwell, about 20 miles from the Adventist elementary and secondary school. That is where my parents taught and I went to school. My parents — Ruth Maureen Luxton (nee Wynne) and Ronald William Albert Luxton — were both educators all their lives, which made me want to be the same.

So some of my brightest memories from childhood were where I was also “teaching.” My classes varied from the 300 or so varied buttons my mother kept in her buttons tin to as many horse-chestnuts — conkers — that I could find in the fall. I also enjoyed roaming the fields behind our house and dreaming in the hay barn about half a mile from home.

Q: What is your favorite Bible verse and why?

I have many favorite verses, but Psalm 139 is my all-time favorite. It is a passage that I was introduced to as a late teenager, during one of those periods of questioning that are pretty typical at around the age of 17 and 18. I read it sitting overlooking the sea in South Wales. It is a psalm that is full of imagery on the intimacy and yet grandeur of God, rather like the ebb and flow of the tide, with waves crashing one moment and then the sea calm the next.

So every time I read that Psalm now, I smell the salt in the area, hear the sea, and remember how close God was to me as a questioning teenager — and how well He knows me now. A very comforting yet challenging thought.