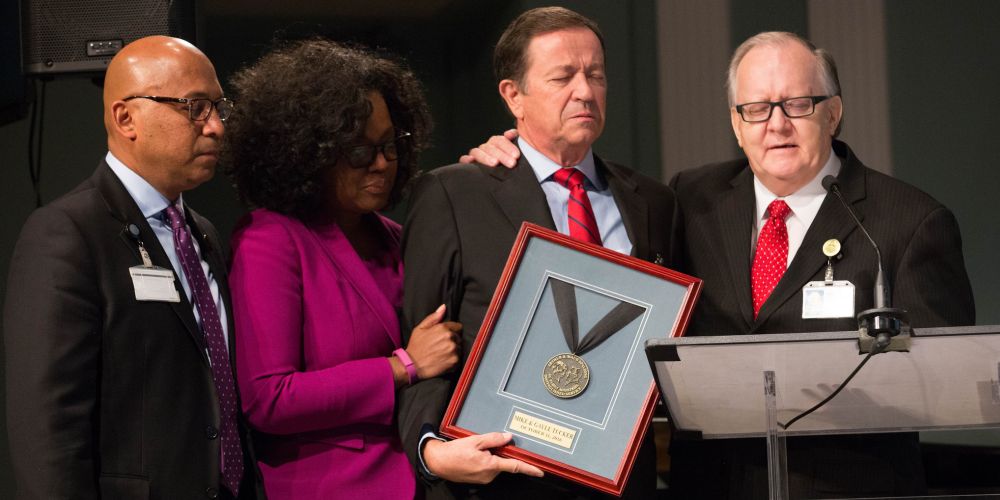 Six months after losing his wife of 40 years, Seventh-day Adventist television host and pastor Mike Tucker lives by putting one foot ahead of another.

“I think about her every morning and every evening and throughout the day,” said Tucker, 64, of his wife, Gayle Tucker. “Yeah, it’s tough, and yet you keep going ahead with life, doing the things you think are right and living the life you’re supposed to live.”

The Tuckers, who created the popular “Mad About Marriage” seminar series and co-hosted “Faith For Today,” the oldest continuously broadcast religious television program in North America, were recognized with an award for their work to families at the church’s Annual Council business meeting on Oct. 11. Tucker accepted the Arthur and Maud Spaulding Medallion, the highest honor presented by the Family Ministries department of the Adventist world church, from directors Willie and Elaine Oliver.

The couple’s ministry wasn’t supposed to include Gayle’s death on April 10, following a March 19 diagnosis of pancreatic cancer that had spread to her liver. Neither she nor her husband were angry at the outcome, Mike Tucker said.

“I asked Gayle before she died if she was angry,” Tucker said in an interview. “And she said, ‘No. I’ve had 60 years of immaculate health, and some people never get a day. I’ve had 40 years of a wonderful marriage. Some people never know that. I’ve had 40 years of ministry that has been fulfilling and exciting. I’ve had children and grandchildren, and extended family. Should I be angry that that lasted only 60 years and not 80? That seems to be very ungrateful on my part.’ And so, she died without anger.”

He added: “I knew she would answer that way. I had no doubt. But it did surprise me that I had no anger and that I had already thought the same thoughts. That let me know that God had truly made my lived theology the same as my preached theology, and I give God the glory for that.”

Tucker said the experience of losing a beloved spouse — and of being a public person viewed on television around the world — has created some learning opportunities.

“I’m meeting all sorts of people who have pain, from losses, who have not felt free to express that pain because our society and at times even our religion tell people that active grieving is a sign of weakness or even a sign of a lack of faith,” he said. “They say that I’ve given them freedom and permission to grieve. If a public figure such as I tend to be is willing to express his pain and his grief, they realize that it’s OK and not sinful to grieve.”

Tucker also revealed a personal experience during what turned out to be his wife’s final days. She had dictated personal letters to her children, son-in-law, and grandchildren. She then told her husband that she would have to write a letter to him as well.

It turned out Gayle had two important messages for him. The first was simple, he said: No regrets.

“She knew that my tendency would be to look back at the mistakes I made in the marriage, because everyone makes them, and beat myself up,” Tucker said. “And she said, ‘No regrets. We’ve had a great life together. Absolutely no regrets. Wonderful marriage, wonderful time, we’re each other’s best friend, so no regrets.’

“The second thing she said was, ‘Live our life,’” he said. “And our life has been about faith, family and ministry. Who we are is what we’ve done. She knew it would be hard to go on. But she said, ‘just live our life.’ We’ve established a life, the life is worth living, be faithful to that which we’ve established, and live that life. And I think there was great wisdom in her comments to me. That’s what I’ve tried to do.”

Read Mike Tucker's first-hand account: Coping With the Most Difficult Loss of My Life