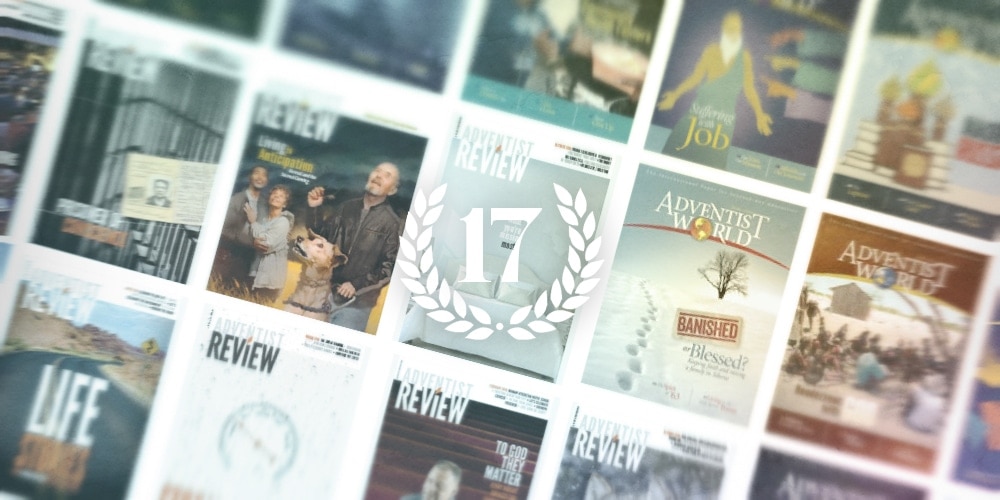 Adventist Review and Adventist World magazines received 17 awards from the Associated Church Press (ACP) at its 2015 Best of the Christian Press Awards, their highest award total ever. The awards recognized superior writing and design in multiple categories. Winners were announced at the ACP’s annual convention, meeting this year in St. Louis, Missouri, where the ACP was founded 100 years ago.

The Associated Church Press is the oldest professional association of Christian writers and editors in North America.

In addition to several other awards, Adventist Review writers, editors, and designers received four Awards of Excellence. Bill Knott’s cover story, “A Hymn to Coming Justice,” won in the category Devotional/Inspiration (December 2015). Dixil Rodríguez won in the category Personal Experience (long format) with her story, “The Wrong Side of the Tracks” (December 2015). “To See His Face,” by Diana Dyer, won in the Personal Experience (short format) category (Adventist World, July 2015). Designer Bryan Gray and artist Steve Crietz won the Award of Excellence for their treatment of Knott’s Adventist Review cover story “Splitting the Urgent Darkness,” (Mar. 26, 2015), which also won an Award of Merit.

Keith Augustus Burton, director of the Center of Adventist-Muslim Relations at Oakwood University, won an Award of Merit for his article “Four Lessons for Adventists from the Islamist Attacks in Paris.” DeWitt S. Williams, former Health Ministries director for the North American Division, won an Honorable Mention for his article “The Black Blue Zone” about Adventists near Huntsville, Alabama, who enjoy above average longevity because of their practice of Adventist health principles. Ellen Musselman won an award for designing the spread “One Story at a Time” that appeared in Bulletin Seven of the July 2015 General Conference Session Bulletins.

The Associated Church Press is the oldest professional association of Christian writers and editors in North America. Its membership is made up of Protestant and Roman Catholic publications. This year’s convention theme was “100 Years of Truth Telling,” and emphasized the role of Christian media in addressing some of society’s pressing issues, particularly race relations.

“The quality and reach of the creative work done by the members of the Adventist Review and Adventist World team is simply amazing,”

“The quality and reach of the creative work done by the members of the Adventist Review and Adventist World team is simply amazing,” says Knott. “Eight members of our team were honored by their peers in Christian publishing for the outstanding quality of their work, along with numerous other contributors to these magazines.With the dramatic acceleration of our social media, digital, and video platforms, hundreds of thousands of people of all faiths now have access to the best in Adventist journalism.”

Other Adventist publications that received awards in St. Louis included The Journal of Adventist Education; Ministry, International Journal for Pastors; Canadian Adventist Messenger; and Envision, published by the Communication Department at Andrews University.

For a complete list of awards received by Adventist Review/Adventist World, visit adventistreview.org/acp-awards-list.

Professional development workshops at the convention featured topics such as editing, reporting, developing a social media presence, and marketing and branding. The ACP will hold its next convention in Chicago in April, 2017.