​Adventist Women Find a Message All Their Own 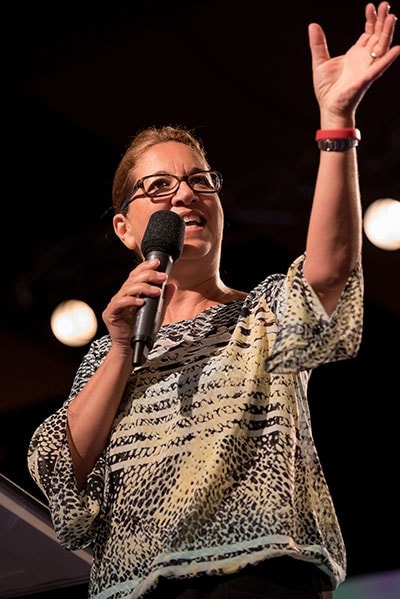 A mini-retreat for women was held this week at the General Conference (GC) Session.

Women attended for many reasons. Perhaps they were in San Antonio because their spouses were delegates, or because they always wanted to attend a GC Session and this was their first; or maybe they were Session veterans, attending for the fourth or fifth time.

The reasons were as varied as the women holding them. But first and foremost, scores of women came to meetings organized by the General Conference Women’s Ministries and Shepherdess International to hear something from God just for them.

“What we offered women was a mini-retreat where they could come aside in the mornings and have a good sermon presentation focused for them, and then in the afternoon, we had some seminars to empower women with new information,” says Heather-Dawn Small, General Conference Women’s Ministries director. Translation services for the meetings were offered in five languages: French, Spanish, Portuguese, Russian, and Korean.

“While morning talks were based on the general theme for the Session, ‘Arise, Shine, Jesus Is Coming,’ afternoon seminars were specifically chosen for personal development and outreach,” she adds.

Ministerial associate secretary Janet Page, who gave the morning message on Wednesday, spoke about the need for women to pray about and prepare for life’s challenges with hope as they juggle marriage, motherhood, and careers. Page spoke in a practical and highly personal tone that most women present could easily relate to. “When you pray together and things get worse, thank God that He’s working. Step out in faith and thank Him and believe it,” she said.

Many women who attended found much inspiration just in the sisterhood of believers in this multicultural movement of ours. “It was very touching to be with and to meet so many other women from the church around the world where you can really feel the fellowship of God’s children,” says Lanieflor Malabad, from the Philippines. “Especially when prayer time came and you embraced with others from other countries, it was a wholesome experience.”

Internationality and idea sharing were big parts of the programming as each day featured women’s ministries reports from different divisions.

“We had every division give a video report,” says Small. “The women got to see what happened in different parts of the world, and it was inspiring for them to see women doing different things, adding to their level of motivation and excitement and helping them think, This is wonderful; let’s go out and do something.”

Our church’s sisters—wives, mothers, grandmothers, aunts, daughters, and friends—are pillars of their families and communities. Master multitaskers, nurturers, and teachers, the women who attended these meetings found themselves inspired and refreshed by what they saw and heard. “I’ll tell you, they [the meetings] were wonderful,” says Caroline Sutton, from the state of Alabama in the United States of America. “They gave me the renewal, refreshment, and encouragement I have needed. I really appreciated the Christ-centered focus and mutual support. We women have so many things in common, and we don’t have to let distractions turn us away from what’s really important.”

Small hopes her fellow sisters left with big takeaways from the meetings. “I hope they took away all the information they got from the seminars and will go back to their churches and share it,” she says. “I hope they took away renewed passion for women’s ministries just by being among women from different countries and hearing their reports. And I’m hoping they feel inspired and have the impetus for the next five years to say, ‘Wow, we’re going back to our churches, and we’re going to make something happen.’ ”