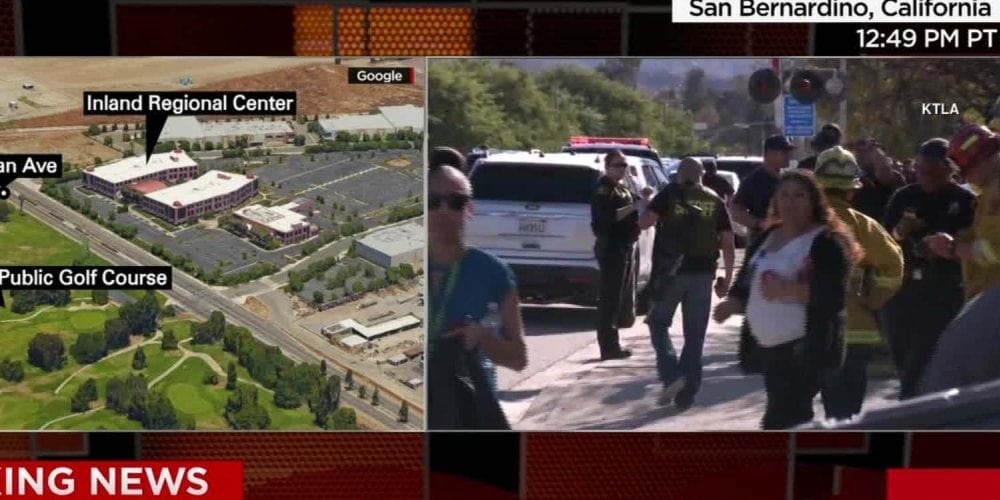 A Seventh-day Adventist believer who miraculously escaped a mass shooting in southern California with nonlife-threatening head, arm, and leg injuries says she hopes the tragedy will somehow alert people that Jesus is coming soon.

Amanda Gaspard was overseeing a conference and holiday luncheon organized by the San Bernardino County Health Department at a social services center in San Bernardino, California, when two assailants went on a shooting rampage Wednesday, killing at least 14 people and injuring 21.

“She was in charge of the meeting that day. In God’s mercy, she had just dismissed everyone for a short break or there would have been more people in the room,” her mother, Diane Gaspard, told the Adventist Review on Thursday.

The mass shooting was the deadliest in the United States since 26 children and teachers were killed in a Connecticut grade school in 2012, sending shockwaves across the country. Police have identified the suspected attackers as a husband and wife in their late 20s but have yet to establish a motive. The suspects were shot dead by police in a van several miles from the scene of the attack.

Diane Gaspard said the male attacker could have killed her daughter, a 2002 graduate of Adventist Church-owned Blue Mountain Academy near Reading, Pennsylvania, but for some reason aimed his gun at her leg.

“Amanda’s faith is so strong. She witnesses constantly,” Diane Gaspard said. “We believe that because of her loving kindness the shooter did not kill her. He stood over her and shot her. He could easily have aimed at her head but shot her in the leg instead.”

Gaspard, who was flying to California from the U.S. East Coast to be with her daughter on Thursday, said Amanda quickly contacted her to let her know that she was alive. Amanda was hit multiple times with shrapnel in multiple locations, including the head.

“She was so worried about us that she asked a coworker to call us,” she said. “That poor woman was in shock herself but managed to tell us that Amanda had been shot. Later she told me that Amanda held her hand and prayed with her.”

Amanda was taken to surgery for wounds to her saphenous vein, a major superficial vein of the leg and thigh and the longest vein in the human body.

Her mother said Amanda was stable Thursday and more concerned for her coworkers than for herself.

“When we talked to her, she said, ‘Mama, pray that this incident could be used to witness for the Lord that He is coming soon,’” she said.

Daniel R. Jackson, president of the Adventist Church’s North American Division, said church members across the continent were “heartbroken that we must once again mourn the loss of innocent lives as the result of gun violence.”

“Along with our heartfelt prayers, it is time that something is done to address the pandemic of gun violence,” he said in a statement. “It is time that we say no to these tragic massacres that have become commonplace in the United States. It is time that we do something to find solutions to put an end to this pervasive problem.”

He added: “We pray for the day when children and adults can live their lives without fear.”

Like Amanda Gaspard, Ted N.C. Wilson, president of the Adventist world church, saw foreshadowing of Jesus’ return in the tragedy.

“Let us pray for those affected by this tragedy in southern California and plead for the Holy Spirit to use each of us wherever we are in this troubled world to be part of God’s ministry of reconciliation (2 Corinthians 5:18), pointing people to the Lamb of God, Jesus Christ, our Savior, who came at the first advent to provide us with eternal life and will return soon at His second advent to accomplish that task,” Wilson said on his Facebook page.

He added that he had prayed for Amanda Gaspard and everyone else affected by the shooting, including Adventist-owned Loma Linda University Medical Center, which has taken five of the 17 people injured in the attack.

Briana Pastorino, a public information officer at Loma Linda University Health, the parent company of the medical center, confirmed to reporters that five people had been hospitalized but provided no further details.

“We’re all shaken by this, we’re all bothered by it,” she said Wednesday. “We’re treating these people that didn’t need to get hurt today.”

Two of the five patients admitted to the hospital, a level-one trauma center that trains for this kind of mass casualty crisis, were critically injured, CBS News reported.

As tensions ran high Wednesday, a bomb threat was made against the Loma Linda University Medical Center, putting the facility on a code-yellow alert.

“The alert was lifted about an hour later when experts determined the threat lacked credibility after a careful screening of the interior and exterior of the facility,” Pastorino said in an emailed statement Thursday.

As part of an effort to ensure the safety of all students and faculty members, Loma Linda University cancelled Wednesday classes in mid-afternoon and encouraged students to leave public areas of the campus.

On Thursday, the entire campus was back at normal operations.

“All scheduled university Thursday classes will meet with no alterations in the schedule,” Pastorino said. “The medical center’s operations have returned to normal. The emergency department is receiving new patients, and no areas of the facility are operating under any restrictions.”