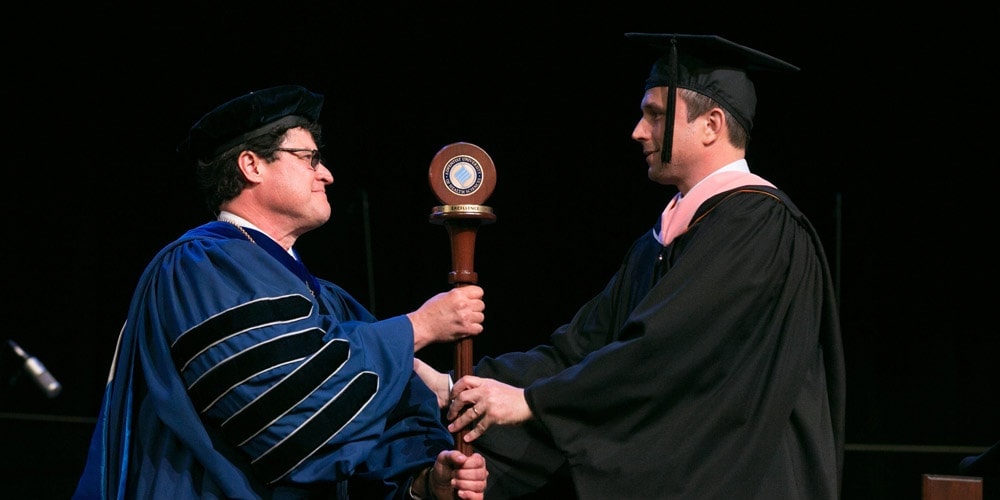 On Thursday, Jan. 11, Adventist University of Health Sciences (ADU), a Seventh-day Adventist school based in Orlando, Florida, United States, hosted the inauguration of Edwin I. Hernández, its second president. Hernández served as ADU’s provost for two years prior to succeeding the school’s founding president Dave E. Greenlaw on August 1 last year. Under his leadership as provost, ADU has sharpened its standards, embraced innovation, and expanded its degree programs.

“A higher education institution exists not just to prepare its students for a job, but to inspire people with a sense of calling.”

President and CEO of Florida Hospital Daryl Tol spoke and welcomed the audience to this “occasion of faith, heritage, and promise.” Mayor of Orlando Buddy Dyer was also in attendance to speak and greet the new president. Dyer spoke of ADU’s importance in the Orlando community. “As demand for quality healthcare grows, so will the need for quality healthcare programs,” he said.

The inaugural address was delivered by Loma Linda University professor of Theology Richard Rice, who is Dr. Hernández’ former teacher, mentor, and friend. “A higher education institution exists not just to prepare its students for a job,” said Rice, “but to inspire people with a sense of calling.”

At the Gala dinner following the inauguration, Hernández also unveiled the Presidential Scholars Award, which will be awarded to freshman undergraduates at ADU who exhibit extraordinary potential to be the transformational leaders of their generations with the option of yearly renewal, up to a maximum of four years. The dinner was attended by ADU employees, select scholarship students, government officials, alumni, and presidents from other Adventist universities and colleges.

Hernández has been a leading scholar and strong advocate for Christian education, and has led several philanthropic urban initiatives and research studies, particularly regarding Latino communities in need. Some of his most notable achievements have included serving as vice-president of Academic Affairs at Antillean Adventist University in Puerto Rico, program officer for The Pew Charitable Trusts, and founding director of the Center for the Study of Latino Religion at the University of Notre Dame.

In a video that played during the inauguration ceremony, Hernández described his path to education and ADU, and the role his family played in his choices. He talked about “Rising Together” as the key theme of his leadership. “I intend to cultivate an environment of collaboration, innovation, and leadership on the campus,” he said.

Hernández also addressed the students in the crowd as he thanked everyone who attended, “You are the most important people here today,” he said.