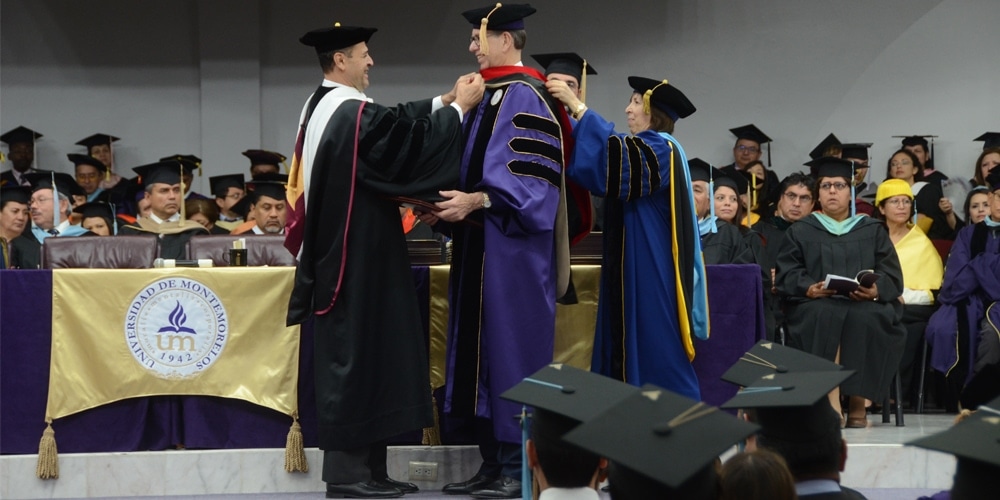 Montemorelos University conferred an Honorary Doctorate of Religious Education to E. Edward Zinke, during the Adventist institution’s commencement graduation ceremonies on campus in Montemorelos, Nuevo Leon, Mexico, on May 20, 2018.

Zinke was honored for his contribution in the areas of Bible devotional studies, for his commitment in fostering a forum for study and exchange in the study of the Bible through faith and science conferences around the world; for his entrepreneurial spirit; and recognition of the principles of Christian stewardship in the use of resources.

“We give out honorary degrees for those who have made an academic and professional contribution that promotes development in our community and our educational institutions,” said Ismael Castillo, president of Montemorelos University, during the commencement ceremony.

“We admire you for your important contribution to the Adventist educational model, for your presentations, for your research, your studies, and collaborative work,” said Castillo.

“I am amazed each time I come to this campus,” responded Zinke as he addressed the more than 2,000 people at the campus church. Zinke shared a story of when he was young and his father was told that his son might be only able to complete his 8th grade. “But my father insisted that I read the writings of Ellen G. White, and she challenged me to become all I could be…she led me to the Scriptures,” explained Zinke. “The Scriptures are the best way to develop one’s intellect and so as a result of that I support Christian education.”

Zinke applauded Montemorelos University for immersing students in the Scriptures. “God bless you as you take the commission of spreading God’s Word around the world,” added Zinke as he addressed the more than 300 graduates.

A Life of Participation and Leadership

For over five decades, Zinke has been involved in biblical scholarship and in the promotion of religious education. After a brief time in pastoral ministry, he joined the Biblical Research Institute (BRI) at the Adventist world church headquarters in the early 1970’s, where he served for fifteen years as associate secretary.

From the BRI, Zinke transitioned into corporate leadership, serving as president of Ann’s House of Nuts, a company developed in partnership with his wife Ann. The company grew to employ over 1,000 people in a 500,000 square-foot (approximately 46,000 square meters) operating headquarters. The Zinke’s sold the company in 2008, and it is now the largest provider of snack nuts and nut and fruit mixes worldwide.

However, while leading his company, Zinke continued his involvement in theologically-based endeavors. During those years, he assisted in organizing the first Seventh-day Adventist international Bible conference held in Jerusalem. He was also instrumental in founding Perspective Digest and worked to find partners for the creation of a new international Adventist Bible commentary (the first volume of which was recently published by Pacific Press). Zinke also began serving as treasurer of the Adventist Theological Society, a role he is still in.

Following the sale of Ann’s House of Nuts, Zinke continued to lecture, write and organize events meant to provide rich theological experiences for scholars and PhD students. Among his passions are the deep study of the Scriptures and hermeneutics, the connection between doctrine and a personal relationship with Christ, as well as the integration of faith in learning.

“For more than 20 years, Ed Zinke has been a clear and persistent voice calling Adventist higher education back to biblical foundations across all academic disciplines,” said Bill Knott, executive director of Adventist Review Ministries. “His commitment to fostering learning experiences for Adventist scholars on multiple campuses and in many world regions has deepened and improved the quality of instruction and faith experience for thousands of students around the globe.”

Most recently, Zinke has devoted himself to the development of faith and science conferences worldwide, intended to provide a forum for the presentation of papers and to foster discussion about the relationship between biblical faith and science. So far, conferences have been held in the US, Mexico, and India, with more planned around the world over the next few years.

In addition to currently serving on several boards, Zinke is also writing a future Adventist Sabbath School lesson quarterly on the gospel of John, teaches a Sabbath School class at the Spencerville Seventh-day Adventist Church in Maryland, United States and serves as senior advisor to Adventist Review Ministries.

“We’re blessed to count him as a senior advisor on topics ranging from theological concerns to practical business developments,” says Knott. “We’re delighted that Ed’s contributions to the church he loves have been recognized by Montemorelos University through this special award.”

Zinke obtained a Bachelor of Arts degree in Theology from Loma Linda University, a Master of Divinity and Master of Arts in Old Testament from Andrews University and is currently involved in doctoral studies in Systematic Theology from the Catholic University of America, in Washington D.C.

Born in Los Angeles, California, United States, Zinke is the son of missionaries. His father, a medical doctor, was active in raising churches in North America and assisted in establishing what is known today as the La Carlota Adventist Hospital in Mexico.

Zinke and his wife Ann have two grown sons and seven grandchildren.