Adventist Publishing Celebrates Milestones in Vietnam and the Philippines 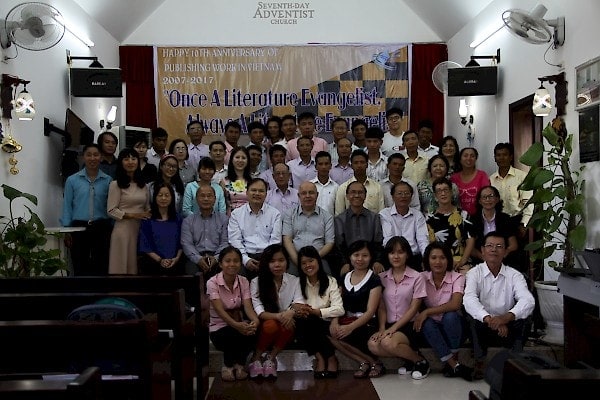 The publishing ministries of the Seventh-day Adventist Church recently celebrated milestones in Vietnam and the Philippines, after growing significantly in recent years. Driven by the inspiration of stories from the field, publishing workers are set to continue spreading the good news of the gospel, said regional church leaders.

Since its beginnings, literature work in the Southern Asia-Pacific Division, where Vietnam and the Philippines are located, has proved to be extremely challenging, they said. But along the way, church members and leaders say they have felt the Lord was leading their endeavors in this ministry.

Literature evangelists—or door-to-door sellers of religious books—have worked untiringly in Vietnam for years. In the past, their efforts were so successful that the government decided to clamp down on the initiative and eventually forbade it.

It was only ten years ago when the publishing work started to pick up pace again. The opportunity sparked a revival among Adventist literature evangelists in the country, and they started visiting houses once again. Since then, the Vietnam Adventist Mission (VAM) was organized, and local church leaders in the country made the most of the opportunity to reach a nation gradually opening to the world. Currently, the Adventist Church in Vietnam works with over sixty literature evangelists led by three area coordinators.

“When we relaunched our ministry in 2007, we had just seven literature evangelists and two books—Steps to Christ and Prophets and Kings,” said Pham Nguyen To Phuong, VAM Publishing Director. “But the Lord blessed us abundantly. We began to print books, two to four a year. Now we offer 38 different books.”

“Witnessing how the Lord led this territory in the past ten years is the fulfillment of Bible prophecy,” SSD Publishing Ministries director Vivencio Bermudez said during the anniversary celebrations. “[It is proof] no one can shut the door and prevent the Lord’s work from being successful.”

Streets are normally flooded by different labor unions fighting for their rights as day breaks in the Philippines on May 1 each year. But this year, over 2,000 lay evangelists across the South Philippines church region gathered to celebrate the anniversary of literature missionary work in the area.

This year’s celebration was even more special, as the Literature Ministry Seminary (LMS) there turned 35. Under the “Celebrating the Goodness of the Lord through LMS” theme, literature evangelists shared memories from the early 80s to the present. The weeklong celebration concluded with an LMS’ Homecoming program attended by over 200 literature evangelists, publishing ministry leaders, and local church members at the South Philippines Union Conference (SPUC) Garden Seventh-day Adventist Church.

LMS-SPUC is recognized to be the first-ever literature seminary in the world. It is one of the five seminaries within the Southern Asia-Pacific Division (SSD) furnished with complete training facilities.

“It’s a privilege to celebrate and witness LMS growth,” said Remuel Tornalejo, who led the seminary from 1996-2000, a time of significant growth. “Through the years, LMS has trained our literature evangelists consistently, developing training programs that greatly improve and meet the demands of time.”

Philippine Publishing House president Florante P. Ty said the continuous growth of the ministry is something to celebrate and cherish.

“Reaching 35 years is very inspiring,” he said. “Along the years, we have come to realize that God has sustained His workers and His ministry.”