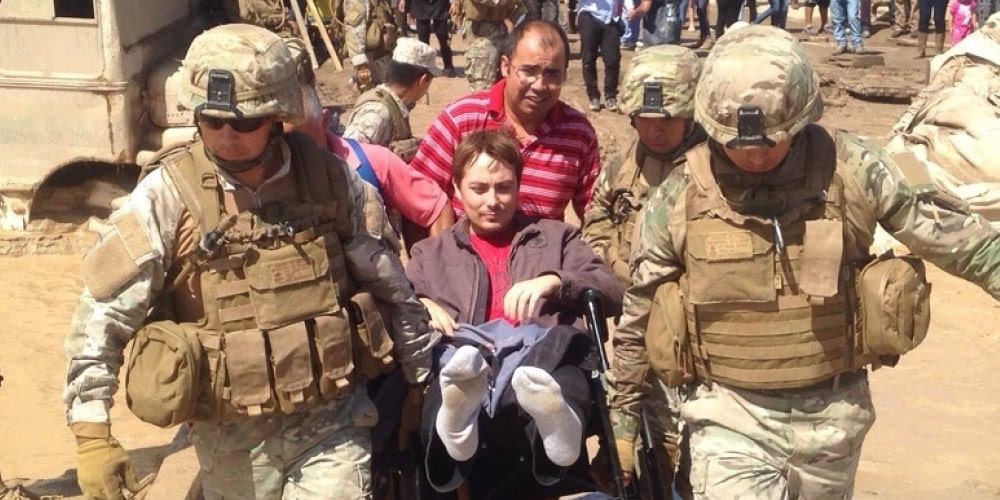 A Seventh-day Adventist pastor narrowly escaped being swept to his death by a massive wave of mud that carried away his car and home amid flashfloods that killed at least 17 people in Chile and Peru.

Rubén Soto-Montaner, pastor of the Chañaral district in northern Chile, praised God for his miraculous escape before an audience of millions watching national television reports about the region’s heaviest rainfall in 80 years.

The rain, which started Monday, March 23, caused widespread flooding affecting 11,000 people in northern Chile and southern Peru, one of the driest places on Earth, emergency officials said Monday. At least 17 people are dead, 20 are missing, and more than 4,500 have been forced to move to temporary shelters.

Scores of Adventists, including ADRA workers and Pathfinders, are assisting in relief efforts.

Pastor Soto-Montaner said he had no time to flee the torrent of mud that poured into his home on March 24.

“I remember standing by my window and seeing a river of mud coming at full speed toward my house, flooding it completely in seconds,” he said in an account posted on his Facebook page. “The windows of the house had bars over them, so I was left trapped. But, thank God, the door burst open and a river of mud dragged me outside. While I was trying to keep my head up, I got stuck in a palm tree.”

Soto-Montaner’s story was seen by millions of people on television, and many have expressed disbelief that he remained alive. His rescue by the Chilean military was among the first images to emerge from the region after the first communications were reestablished.

“Before I got stuck in the palm tree, a huge truck stood about 10 meters away from me and served as a shield, blocking rocks and other materials from hitting me,” he said on Facebook. “I watched as a wave of mud dragged houses and cars, but that truck did not move. All the other debris succumbed, but the Lord allowed the truck to remain firm, preventing the wave of mud from hitting me with all its power.”

Houses, churches, and other buildings were completely destroyed. One of Soto-Montaner’s churches in Chañaral was packed full of mud.

“Thank God I'm fine,” Soto-Montaner said in an interview with national television. “I have only scratches, no fractures. … I have nothing serious.”

The Seventh-day Adventist Church has sent a truckload of humanitarian aid, including 12,000 liters (3,170 gallons) of water, flour and other food, cleaning supplies, and basic sanitation products, to northern Chile through its local office of the Adventist Development and Relief Agency.

Immediately after the flooding, ADRA also dispatched a team of specialists in water and sanitation, who have worked with local authorities to ensure the availability of drinking water.

More aid will be sent over the next few days.

In Peru, local ADRA workers attended an emergency meeting called by the authorities of the affected area and pledged to provide water, food, and manpower.

More than 170 ADRA volunteers are now providing assistance in the disaster area, including Pathfinders and visiting medical students from Loma Linda University in California.