Walla Walla University has
been denied re-accreditation for its four-year nursing program, an abrupt
decision that surprised the university and is under appeal.

The Accreditation Commission
for Education in Nursing voted to deny accreditation from July 23 because the
university had failed to meet a single requirement: all nursing faculty must
hold at least a master’s degree, the university said.

“The ACEN’s accreditation
review did not fault the School of Nursing’s curriculum, quality or outcomes,” the university said in a statement last week. “The action was taken because of failure to
meet one accreditation standard — that all Walla Walla University School of
Nursing faculty possess a master’s degree.”

University president John
McVay said the school understood after a 2011 accreditation site visit
that it needed to demonstrate “significant progress” toward making sure that
all faculty had master’s degrees, but not that all actually had to hold the
degree.

WWU’s nursing program was founded in 1897. The program’s accreditation will be continued during the appeal.

More than 3,000 Adventists
marched through the suburbs of Port Vila, Vanuatu, last weekend for the start
of a three-week evangelistic campaign on the South Pacific island.

And attendance at the
meetings is growing at the week goes on.

“Attendance
to the ‘Hope for Port Vila’ evangelistic meeting in the main venue at Freswota
Field, Port Vila and the other nine downlink sites is increasing each night,”
organizers said on the event’s Facebook page on Wednesday. “Freswota Field was
fully packed last night with over 5,000 people.”

The Aug. 24-Sept. 13 campaign
is part of the Adventist world church’s “Mission to the Cities” initiative.

Those unable to make it to
Freswota Field can watch at home on the Hope Channel, which is broadcasting the
entire evangelistic series live on free-to-air television for residents in Luganville,
Lakatoro and Port Vila. The nightly programs are also being live streamed
online at hopeportvila2014.org.

More than 13,500 brochures
were handed out in communities across Efate in the lead-up to the PV14 campaign.
About 3,500 brochures were also inserted in a weekend issue of the Vanuatu
Daily Post.

Hundreds of Adventists took
a week off from their busy schedules for a major community outreach effort in
Venezuela’s capital, Caracas.

The six-day initiative drew more than 2,000 volunteers, who offered smiles, shared
hope, and cleaned dozens of parks, streets and neighborhoods earlier this
month.

The initiative, dubbed “Close to you Caracas,” is part of the church’s big
city-impact to reach out as a church body to let city residents know about
God’s love through acts of kindness, said Josney Rodriguez, president of the church’s
East Venezuela Union.

This was the second annual
coordinated effort to reach the city’s population of 5 million, he said.

The event was reported on
national television and radio stations and in newspapers.

The East Venezuela Union is home to more than 130,000 members worshiping in 456
congregations.

Adventists in Suriname
celebrated the 120th anniversary of the church message entering the South
America country with four days of events in the capital, Paramaribo, that
included appearances by the country’s vice president and homeland affairs
minister.

“We wanted to use this
anniversary this year to connect with the community and let them know who we
are and what we are all about,” Guno B. Emanuelson, the church’s executive
secretary in Suriname, said of the events earlier this month.

Suriname, with a population
of more than half a million, has a church membership of nearly 3,500 in 15
churches.

“The church in Suriname has
not had an explosive growth like other fields, due to the secular influences on
this former Dutch colony and the many different people groups, cultures and
dialects spoken in Suriname,” Emanuelson said. “However through the efforts of
our committed workers and laypeople, the church has made an impact through the
years.”

He said a need remained for
more indigenous workers and the church administration has made it a priority to
work toward upgrading the Suriname Mission to conference status by 2016. 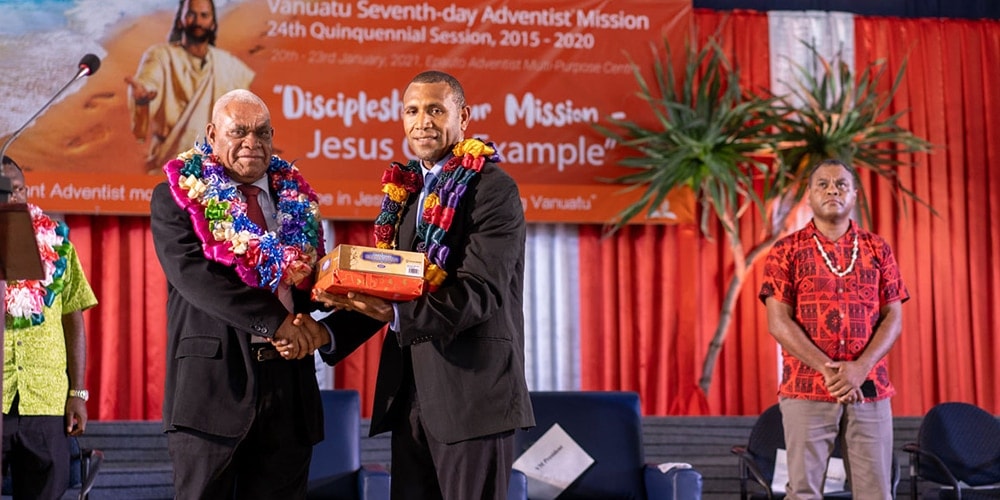