The U.S. missionary boy walked down a hallway to the children’s ward, passing the maternity ward where nurse midwife Lisnett Chipyoza was hard at work.

“Jesus is really coming again!” Chipyoza, still strong in body and mind, said at the conclusion of a short sermon to assembled guests. “If you were doubting it, don’t doubt now!”

Blanchard and Chipyoza personify a love for God and people that has been the mission of the Seventh-day Adventist hospital since it opened as a small clinic in southern Malawi in 1915, the same year that church cofounder Ellen G. White died.

Today, the 200-bed hospital, managed by Adventist Health International, provides a range of preventative healthcare services and specialized services in women’s and child’s health, infectious diseases, chronic disease, and general surgery. It also hosts a Loma Linda University field station where U.S.-based physicians-in-training can participate in a residency program, and is shifting from a care facility to a teaching hospital.

Blanchard returned to Malamulo as CEO in January 2014, 35 years after his tonsils were extracted. On his first day, he walked down a familiar hallway to his executive office, the exact room where he was operated on many years earlier. Shortly afterward, he met up with Chipyoza, who was still supporting and praying for the hospital.

The two met again during the Sept. 8 anniversary celebration attended by a host of government and church leaders, including Malawian Health Minister Peter Kumpalume, Loma Linda University president Richard Hart, and the university’s board chief, Lowell Cooper, who recently retired as a general vice president of the Adventist world church.

Blanchard reflected on the five-hour journey that first brought him to the hospital.

Little Jason’s family had arrived a year earlier at Matandani Mission, the second-oldest mission in Malawi where his father was responsible for the agricultural program and his mother was a midwife and homeschool teacher. The parents became concerned about his health and drove 3 1/2 hours to Blantyre, the country’s commercial capital and second-largest city, where they were told to travel to the nearest Adventist clinic. The boy was taken on a 90-minute drive on a winding but picturesque road through verdant tea gardens to Malamulo Mission, home of the Malamulo Hospital, school, and publishing house.

“I have a vivid memory of the operating room and an anesthetist smiling down at me, asking me to breathe normally as he put a mask over my mouth and nose,” Blanchard said. “My last memory was replying that I wouldn’t breathe!”

Nevertheless, the surgery went well and two days later he took the long drive back home.

His family returned to the United States two years later, but the tonsil experience made a positive impact on Blanchard’s life that would entwine the future of the hospital with his own.

People attending the 100th-anniversary celebration paid tribute to those who played a key role in reaching the milestone.

Chipyoza, who joined the hospital as a nurse midwife in 1925, only 10 years after it opened, was recognized as the longest-serving employee.

In addition to preaching the short sermon, she sang “Sweet Hour of Prayer” in a strong, clear alto voice to the inspired crowd.

For dessert, Chipyoza cut the anniversary cake together with Blanchard.

A recurring theme at the celebration was the hospital’s positive impact on patients and community.

“They have very little money, and the hospital is generously helping in a significant way,” he said. “But this is obviously not enough to run a hospital. We are really grateful for what the hospital is doing for the community and … for the support of donors from abroad.”

Malamulo is able to reach a wide range of people, serving a catchment area of about 500,000 people, through outreach health services in 16 mobile clinics and three health centers. It is expanding with a fourth health center, which is to be built in the southern Blantyre area of Limbe next year.

Malawi has a population of about 16 million.

Hart, president of Loma Linda University, remembered his first visit in 1972 when his car had an unexpected encounter with a flying chicken. The bird shattered the windshield in an accident that damaged the windshield and the chicken but did not discourage Hart from returning many times.

Hart noted that thousands of students have studied at Malamulo, including some who went on to study at Loma Linda University. He paid tribute to 36 medical alumni from Loma Linda Hospital who have worked long-term at Malamulo.

“Some have been buried in the Malamulo Mission Cemetery,” he said.

Paul Ratsara, president of the Southern Africa-Indian Ocean Division, was visibly moved by the sacrificial service of many hospital staff members over the last century.

“I pay tribute to the many missionaries and local staff who have offered their services to Malamulo, including our present talented team,” he said. “While our needs are vast due to our aging equipment and limited financial resources, we pay tribute to our loving heavenly Father who has continued to provide for us.” 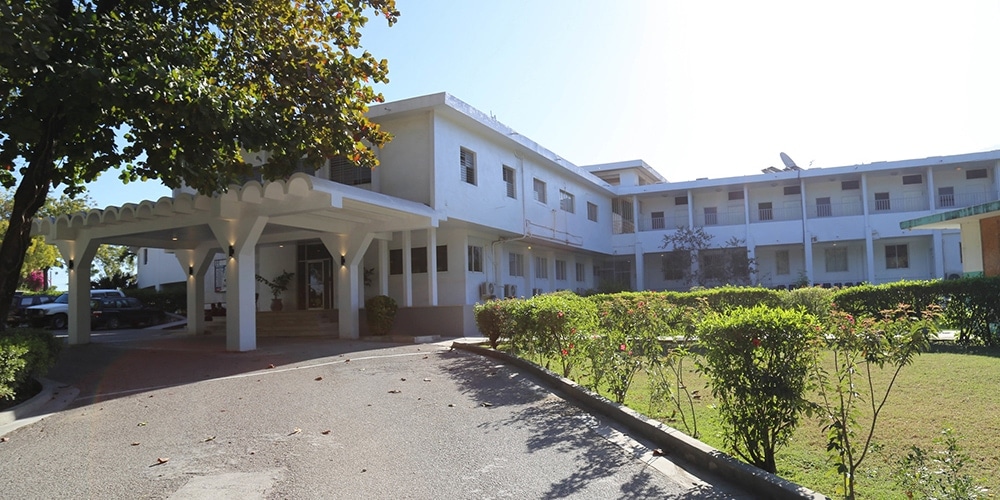 News
US Adventist University Partners to Train Physicians in Africa