By Herbert Ford, PUC, with ANN and Adventist Review staff

Pacific Union College’s librarian received a hero’s welcome from thousands of people in rural northwestern Ethiopia when he returned to his native country to celebrate the inaugural year of an Adventist high school that he helped build.

Adu Worku, director of Pacific Union College’s Nelson Memorial Library, was the guest of honor at a two-day festival a few weeks ago attended by some 6,000 people at Worku Memorial Academy, which is comprised of several buildings on a 15-acre (6-hectare) campus.

Worku, who as a boy worked as a sheepherder in the area before moving to the U.S. as an adult, raised $600,000 for the academy of 400 students by appealing to friends in California’s Napa Valley, where Pacific Union College is located, and two grant-making foundations over the past five years.

While many elementary schools are available in rural Ethiopia, Worku said the area where he grew up didn’t have a school that provided high school education.

“Completion of high school is a requirement for acceptance to a college or university education. That's the reason this new high school is important,” Worku said in an interview at the library on the Seventh-day Adventist campus, located in the town of Angwin, California.

The praise that Worku received in Ethiopia was also a tribute to his years of struggle to educate himself. Worku worked as a sheepherder in the rolling green Ethiopian hills, not far from the headwaters of the Blue Nile river, with seemingly no chance at obtaining even an elementary education. He now holds three master's degrees and a university-conferred honorary doctorate.

"The pattern of a man's life where I lived was that you shepherded sheep and goats from about age 7 until you were 12," Worku said. "At about 12, you graduated to work on the family farm. And that was it for the rest of your life. You became a farmer and died as a farmer."

Worku’s road to education began by accident—literally. While walking with friends through brush one night, he was struck in the eye by a tree branch that had been pulled aside to allow a friend to pass ahead of him. The blow led to blindness in that eye and a trip to a distant hospital.

At the hospital there was also a school.

“I saw what learning was for the students there, and that it was available to anyone simply through using one's mind. I fell in love with education," Worku said.

Without returning to his family home, he began seeking entry into one elementary school after another, most of which required a tuition fee that he didn't have. He begged for board and room in return for work among families near the schools he wanted to attend. He found firewood-gathering and grass-cutting jobs to meet tuition and textbook expenses. 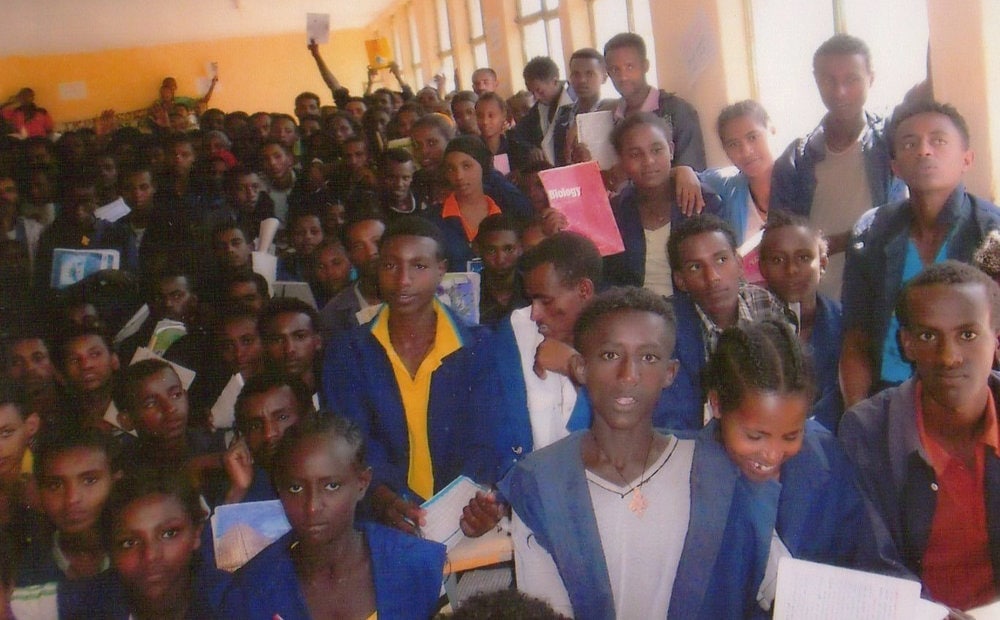 He said he “devoured” his textbooks and successfully tested out of several school grade levels, which moved him along rapidly. At age 20, with a sixth-grade education, he was hired as a schoolteacher.

During the course of Worku's drive to educate himself, he had a chance encounter with a Seventh-day Adventist missionary couple at an Ethiopian Adventist hospital who decided to help him.

"That physician and his wife told me that if I really wanted an education, they would sponsor me for just as far as I wanted to go. They kept their word, and I was able to keep on educating myself," Worku said.

"Our coming in contact with each other as we did, and their decision to invest in my life, was a miracle to me," he said.

Worku is now working on a project to help fellow Ethiopians who, like him, are visually impaired. He is recruiting eye doctors in the U.S. to visit his old village and perform cataract surgeries at a local clinic.

"My hope is that we will be able to interest eye specialists to take short-term, unpaid periods of service there," Worku said. "In addition to providing great clinical experience, it will give those who serve a great sense of having helped others."

Adventist World, May 2011: "A Hand Out and a Hand Up," a first-hand account by Adu Worku of the value of Adventist education