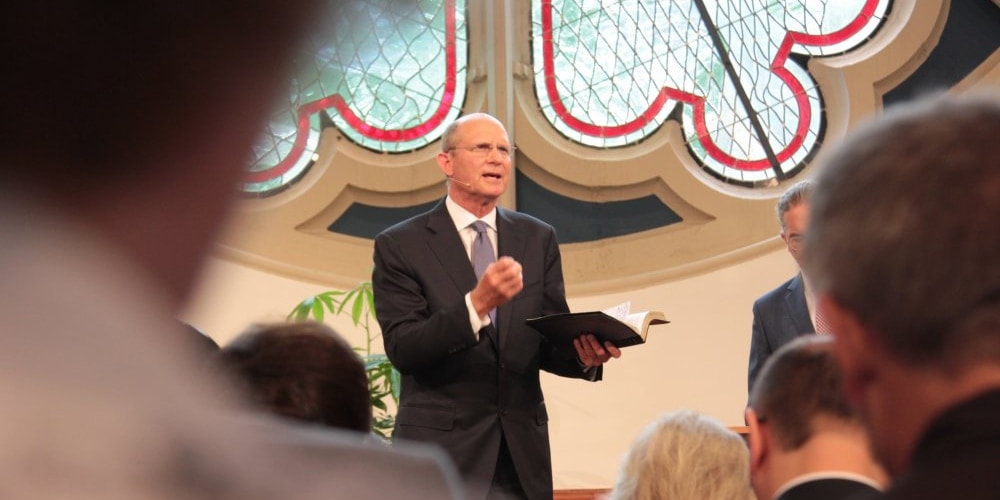 Seventh-day Adventist Church president Ted N.C. Wilson retraced the footsteps of Martin Luther on the 500th anniversary of the Protestant Reformation in Germany and appealed to church members everywhere to carry the torch of the Reformation to the end of time.

Wilson, visiting Germany at the invitation of local Adventist leaders, stopped by key sites in the life of Luther, a 16th-century monk who opened the door to Protestant faiths, including the Adventist Church, through his emphasis on the supremacy of the Bible over religious tradition.

The July 6-10 tour included stops in the German cities of Erfurt (where Luther entered St. Augustine’s Monastery to become a monk in 1505), Wittenberg (where Luther is said to have nailed 95 theses to a church door in 1517), and Eisenach (where Luther, concealed in nearby Wartburg Castle, made the New Testament accessible to ordinary Germans by translating it into German in less than 11 weeks in 1521).

“The great revelation of the plain reading of the Word of God and the actual reading of the Word of God inspired countless thousands of people in Germany and around the world,” Wilson said in an interview on a tour bus traveling between Reformation sites. “Those people wanted to relate the personal experience that they had obtained of knowing God through the reading His Word and to share it with others.”

That is the same missionary spirit that should burn brightly in the hearts of Adventists, Wilson said. He noted that Adventist Church cofounder Ellen G. White indicated in her writings that the Reformation was never to stop with Luther but was to continue to Jesus’ Second Coming.

“This Reformation, based completely on the Word of God and our relationship with the Lord, must continue to the very end of time,” Wilson said. “We are to share this and the three angels’ messages of Jesus’ soon coming in Revelation 14, and the Reformation that was started 500 years ago will soon be accomplished with the Lord’s return.”

Wilson gave a similar, mission-minded message during a Sabbath sermon at Friedensau Adventist University, which was broadcast live on the German affiliate of the church-owned Hope Channel. He challenged German Adventists to, like Luther, cling to the Bible and actively share their love for Jesus in their communities.

German church leaders welcomed the renewed emphasis on mission and the opportunity to strengthen ties with Wilson and other church leaders who accompanied him on the Reformation tour.

“In the past, we maybe did not participate as much in the programs and events of the world church, and I think part of the strategy is to get connected with the world church again,” said Werner Dullinger, president of the South German Union Conference. “This connectivity comes from a personal relationship and knowing each other better. That is part of the goal of this tour.”

The tour is the brainchild of Dullinger and Johannes Naether, president of the North German Union Conference, and the idea arose three years ago during the planning of Reformation anniversary activities for local churches.

“One idea was to invite some General Conference officers to visit us here to get in contact with the spirit of the Reformation,” Naether said.

The General Conference is the administrative body of the Adventist world church.

The Adventist Church has about 35,000 members in 590 congregations in Germany, according to the latest statistics from the world church’s Office of Archives, Statistics, and Research. Germany has a population of some 81.5 million.

During the tour, Wilson and the other visitors also stopped by Waldfriede, a 308-bed hospital owned by the Adventist Church in Berlin. Chief executive officer Bernd Quoss said the hospital focuses squarely on fulfilling the church’s mission through its many medical programs, including a facility that offers 5,000 preventive courses a year to the community, and the Desert Flower Center, which provides holistic treatment for female genital mutilation victims.

“We are an Adventist lighthouse for the population in Berlin,” Quoss said.

An original version of this story was posted on Adventist Mission.