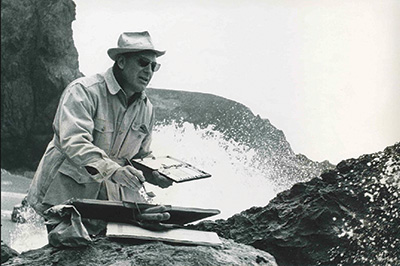 Vernon Paul Nye didn’t know the gifts his Creator had etched in his DNA. As with most understanding of one’s skill or talent, the breath of discovery slowly unfolded in God’s time.

It was the funny papers that inspired Nye’s first attempt at drawing. As a future renowned watercolorist, his first medium was in pencil and ink. At 16 he took his first art class, and as his view of the world took shape so did his purpose: to express God’s creation so that others could pause to reflect.

On July 24, 2013, Vernon Paul Nye died. He was 97 years old. His eyes still clear, his hearing sound, he slipped into a peaceful sleep to wait for the ultimate creation. With Nora, his wife for 71 years, he will watch Jesus create a new world. Nora died in 2009.

His professional life began as an illustrator of children’s Bible storybooks and articles at the Review and Herald Publishing Association in 1941. There he studied informally with well-known artists Roy Mason, Eliot O’Hara, and Harry Anderson. He also worked for a brief time for the Department of Defense, the U.S. Treasury, and the Federal Civil Defense Department.

In 1955 Vernon wanted to teach, and Pacific Union College (PUC) in Angwin, California, needed an art director. His first classroom was in a basement furnished with a large table and dilapidated easels. His first class numbered 15. When he left PUC in 1976, there was a well-established art department that offered B.A. and B.S. degrees, and a pallet of artists, some acclaimed, all enriched by his talent and dependence on God.

Nye also taught at Atlantic Union College and Walla Walla College, in Massachusetts and Washington, respectively, and was resident illustrator at Loma Linda University in California.

“Start with a concept, a purpose, or a goal for your painting . . . we’re not trying to educate the viewer, we’re trying to arouse his interest,” he explained once to Creation Illustrated magazine. “You can paint anywhere you can throw a dead cat.”

According to his son, Gilbert, his most treasured achievement was the invitation to join the American Watercolor Society in 1968. It was the society that presented Vernon with the prestigious Edgar A. Whitney Award.

National honors, prestigious awards and accolades, a constant demand for live demonstrations, and workshops in this and foreign countries did not distract Nye from what he called his major work, ­teaching art and mentoring students.

Once retired, he was asked to work for the church painting its early work: missionaries, education, medical, and many of Ellen G. White’s visions, all published and now hanging on the walls of the White Estate in the world church headquarters in Maryland.

At his ninetieth birthday celebration, PUC’s then-president, Richard Osborn, said, “You are an absolute wonder of a man. Gifted and talented beyond compare, your life has been a gift to us all.” For Vernon, the gift to us all was the wonder of God’s creation.

Nye viewed his art career as a means of outreach. “When I go out in the mornings, I pray for special wisdom and skill,” he shared. “I ask the Lord to guide my hands, and to give me special insight, clear thoughts, and a clear voice.”

“He was one of the very best in spreading the Lord’s fragrance and radiating the Lord’s light . . . a living sermon praising the beauty and hope visible in nature,” said Charles Bell, academic dean at PUC in 2007.

Flowing from a surrendered heart, through a paintbrush dipped in just the right mix of colors, Vernon Paul Nye dedicated his life to telling the story of God’s creation. Pleasing his Lord was the only award he ever wanted.