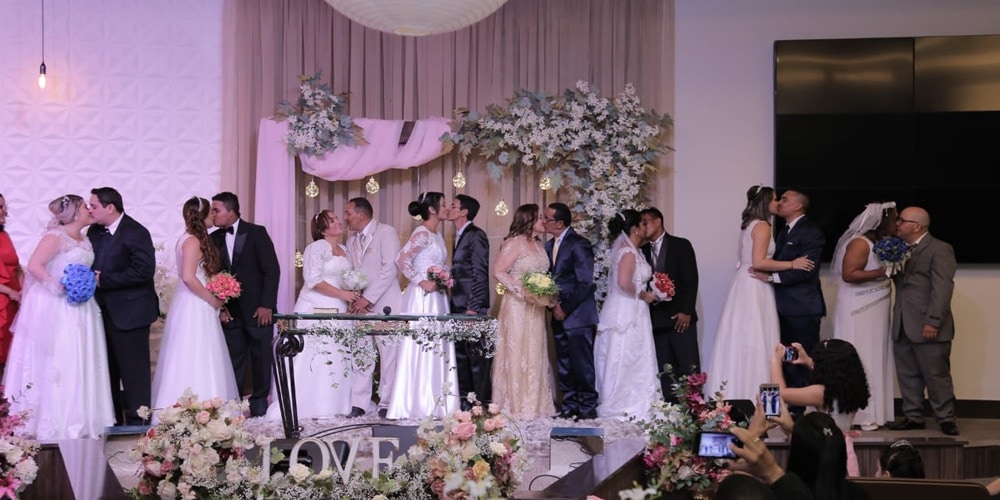 Belém Adventist Hospital (BAH) employee Williany Queiroz had lived with her partner for 16 years, and they had a child. In the midst of their daily routine, the dream of making their union official was postponed for years, until Queiroz heard about the “Valorizar” (Finding Value) program offered by the northern Brazil Seventh-day Adventist healthcare institution where she works.

“Getting a legal certificate of our union was a dream that for a long time seemed far away but now it has come true,” Queiroz said. “I thank God and the hospital management for this project. For me, they are my second family.”

Queiroz and her husband were one of the eight couples who attended “Legally Married,” a collective wedding ceremony coordinated by HAB’s management. The initiative’s goal is to support healthcare institution employees in their efforts to consolidate their common-law union.

Organizers said that “Valorizar” is a program full of actions that benefit employees in five areas — health, safety, valuation, productivity, and family.

“We esteem every single step involved in this project because we know that it has helped to fulfill a dream for our employees,” she said.

The initiative became part of the history of the institution by hosting its first collective wedding for HAB employees. It included a full service, with decorations and a grand entrance of participants. HAB chaplain Aquino Bastos delivered a spiritual message. “Always remember to use these three phrases — ‘I made a mistake,’ ‘Forgive me,’ and ‘I love you.’ Marriage needs love, humility, and, above all, God,” he told them.

The ceremonies carried legal validity with the support of the Val de Cães Office and the presence of Judge Vanderley Oliveira, who officiated the civil union and praised the initiative.

“What a spectacular scene that unites heaven and earth!” Oliveira said.

Each couple left with their marriage certificate in hand. Participants also received a Bible from the HAB Chaplaincy Office and, after the ceremony, welcomed their guests at a dinner party hosted as part of the initiative.

For employee Airton Nascimento, “it was a privilege to make our union legally binding. It was great to celebrate marriage, our family, in a simple and blessed way,” he said.

Nurse Luana Rocha, who works at the hospital’s Emergency Care Unit, said she got very excited about the initiative.

“When I heard about the project, I made a point of participating. I feel very valued. It is a dream come true. It is an honor to be part of the Adventist hospital family,” Rocha said.

Her husband, Yang Miranda, also had words of appreciation.

“It’s an incredible feeling to share this moment with family, friends, other couples, and especially with God,” he said. “We had been looking for this for some time.”

Miranda also emphasized that according to him, the project’s name says it all.

“As an employee, my wife feels valued, and we, as a family, feel immensely thankful to be able to live this moment,” he said.