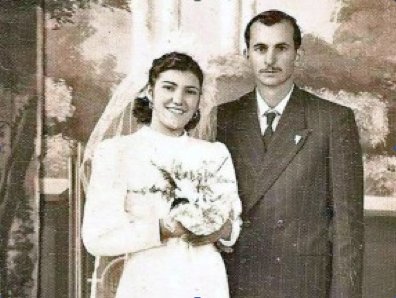 An Adventist couple married
for 65 years died holding hands in a hospital room in Brazil.

The couple, Italvino and
Diva Possa, were known in life for giving Bible studies and providing clothes
to the needy. In death, their devotion to God and each other made news headlines
across Brazil.

Italvino, 89, died 40
minutes before his wife, Diva, 80, in their hometown of Porto Alegre in
southern Brazil on Oct. 3.

Italvino was diagnosed with
leukemia in August 2013, and Diva had bladder cancer.

They died in adjacent hospital beds, her hand resting on top of his.

Friends and family spoke
warmly of the couple, who were members of the Vila Jardim Seventh-day Adventist
Church in the city of 1.5 million people.

“They were very
missionary-minded,” said a friend, Elena Brenner. “They went out to give Bible
studies and visit people whenever they could. They were active participants in
Sabbath School, and they will be remembered always for being kind and polite.”

The couple, who wed in 1949,
were members of the Adventist Church for more than 30 years. But it was Diva
who led her husband, who traveled frequently because of work, to baptism by
packing books by church co-founder Ellen G. White in his luggage, said
daughter Veramar Possa.

“My mother, who was baptized
first, would put an Ellen White book in his suitcase every time she packed for
him for a trip,” she said. “When he arrived at the hotel, he would read the
book.”

After Italvino’s baptism, the
couple read the Bible together every morning and welcomed the Sabbath together
as a family.

They also became deeply
involved in church outreach, with Italvino participating in evangelism
initiatives and establishing an Adventist presence in the town of Maquiné in
southern Brazil, said a second daughter, Rosimar Possa.

“My mother helped a lot in
the Dorcas Society, sewing clothes to give to needy children until the day she
was admitted to the hospital,” she said.

The Dorcas Society, a
community outreach program formally established by the Adventist Church in
1874, was renamed Adventist Community Services in 1956.

Other than Christian
kindness, the couple was also known for following a healthy lifestyle.

“My father would go for lots
of walks and cared for an orchard at home,” Veramar said. “My mother always liked
to pick the vegetables and legumes that my father grew in their own orchard.
Besides that, their diet was complemented with a great variety of fruits they
grew, such as grapes, passion fruit, banana, and kiwi, among others.”

The couple’s unity and
companionship took the media spotlight in Brazil, with a report on the noon news
show “Jornal do Almoço” on the regional television channel Rede Brasil Sul de
Televisão and a news feature on G1, the largest news website in the country.

God’s
name was even glorified in their deaths—and that’s probably how the
couple would have wanted it.

“They were faithful Sabbathkeepers
and sought to honor God in everything they did,” said daughter Rosimar.