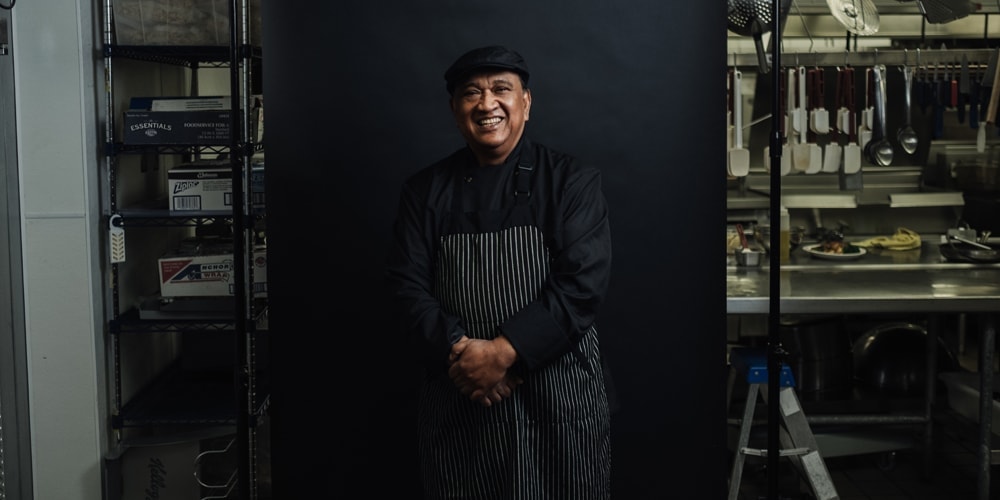 If you were to fly over the small village of Onenoa in Samoa on a Sunday afternoon, you’d see it covered with fragrant smoke from all the cooking. After church, the men of the village chop down wood and set up the umu, a big outdoor earth oven built out of lava rocks and banana tree trunks, where they make an abundant meal.

As he cooked elaborate meals with the men in his house, Sualua Tupolo knew from an early age that he had a passion for cooking. He just didn’t realize that God would take his passion and turn it into a powerful ministry.

Tupolo has served as the exclusive chef for three governors of American Samoa, preparing meals for special government functions, legislators, and heads of state. However, he learned that God had a bigger plan for him when He brought him to Southwestern Adventist University, in Keene, Texas, United States, as the director of Food Service and Executive Chef.

In high school, while working an after-school job at Meals on Wheels, a chef spotted Tupolo’s talent for cooking. The chef encouraged him to apply to culinary school. Tupolo excelled in school and quickly climbed the ranks to become the personal chef at the Samoan Governor’s kitchen. There he cooked extravagant meals for special events that hosted anywhere from 30 to 1,500 people, including dignitaries from around the world.

Tupolo was also responsible for starting the first culinary school in American Samoa. He even conducted a cooking demonstration for the staff of the US House of Representatives who prepare food for congressmen and congresswomen in Washington, D.C.

Despite these notable accomplishments, the memory he cherishes most is when he found a meaningful relationship with Jesus; a relationship that would change the way he approached food. Tupolo was raised as a Christian, but it was when he started attending the Seventh-day Adventist Church that something clicked for him. His change inspired most of his big family of 12 to convert to Seventh-day Adventism.

“The biggest blessing in my life is that God never gave up on me,” he said. “He called me and waited for me to come to Him.”

Aside from gaining a deep, personal relationship with Christ, Tupolo also loved the health principles of the church and saw the positive impact of a healthier, plant-based diet. “I realized that I am more spiritually aware when I am eating, sleeping, and exercising well,” he said.

Tupolo says that God helped him understand that food is an integral part of His blessings. God has always shown his people that to take care of their spiritual needs, you have to take care of their physical needs as well. Tupolo points out that food and ministry have gone hand-in-hand for ages, from God providing manna in the Old Testament to Jesus multiplying the five loaves and two fishes in the New Testament.

He says that his faith and cooking are now a packaged deal. Tupolo promotes healthy, plant-based food in the cooking classes he teaches in his local community, finds unique ways to use food to tell stories from the Bible, and sculpts the food into visual aids to tell stories like Noah and the flood for children. “Food is a language that you can communicate to people in a way that you can’t through other means,” he said. “Food is never boring, and people are more willing to listen to you share about the Bible when food is involved.”

Also, Tupolo has reached many with his cooking ministry through his television program on the Hope Channel. He’s even taken it on the road by serving in missionary trips to countries like South Africa, Kenya, Costa Rica, Canada, and Peru. He teaches people how to make healthier choices with the options they have available to them. “You can tell people about all the consequences of bad food, but if you do not give them the options they need, then change will not happen,” he said.

In his most recent adventure, Tupolo says that he was led by God to come serve the students at Southwestern Adventist University. There, he takes the time to learn food from various countries and make them with great care. He says he understands that there are students from different parts of the world present at the university and he wants them to feel at home. He added, “When it comes to cuisine, if you have a good heart, then it reflects on the food.”

When he isn’t cooking, he spends his time worshipping with kitchen workers, students, and members of his community. The fragrance of his food and devotion brings students to his kitchen where he shares about God with them. “I am really committed to this ministry,” he said. “I am excited to see what God is doing through me.”

Tupolo says that most people would never have guessed the large impact that food can make in bringing people to Jesus. However, God can take any talent and make it a mighty ministry. He encourages those he meets to be open to the voice of God. “If you hear God’s calling, don’t be shy to communicate to Him and ask guidance on how to go about his plan. He will open the path.”

An original version of this story first was published in the Spring 2018 issue of the FLAMEmagazine.