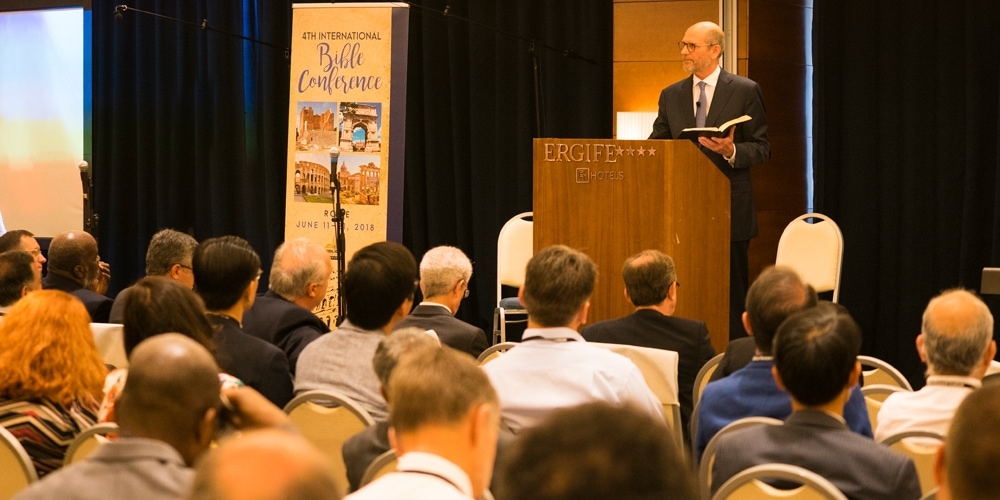 The following article is part of a series of reports from the Fourth International Bible Conference, hosted in Rome, Italy from June 11-21, 2018. The theme of this particular conference is eschatology, a word that literally means “the teaching of the last things” and describes the study of last day events and associated subjects. ~ Editors

Everywhere around us, world events are pointing to the soon coming of Jesus, said Seventh-day Adventist Church president Ted Wilson on June 16, 2018. And it’s time for every member to get involved and do something to spread the news. These words were the gist of president’s message as he addressed more than 360 Adventist scholars, professors, and leaders from around the world meeting in Rome, Italy, for the Fourth International Bible Conference from June 11 to 21.

Based on Matthew 24:36–39, where Jesus taught that just before His second coming the world will be like “the days of Noah” before the flood, Wilson said there is ample evidence the current situation of our world is making those words a reality.

“The world is literally falling apart,” he said. “Politicians can no longer ‘fix’ problems. The social and cultural norms of the past … are disappearing fast.”

Calling the meeting in Rome to some extent “ironic,” Wilson also reminded attendees that “the ecumenical landscape is changing daily to reflect the fulfillment of Revelation 13,” which anticipates the rise of a political-religious power that opposes God.

And what about the economy? he asked. “Even though the stock market is artificially charging ahead, don’t be fooled. What goes up can easily come down.”

Called to Be Faithful

In these “days of Noah,” Wilson explained, Seventh-day Adventists have been called to lift up Christ and His righteousness. It is a call that, according to him, includes going to the great urban centers and getting every member involved in mission.

Using the well-known Bible metaphor of the watchman, the president called scholars, theology professors, Bible teachers, and spiritual leaders to “give the trumpet a certain sound” — to be clear and unapologetic about the prophetic narrative based on Bible truth. “Let’s not forget what our pioneers studied, believed, and preached,” Wilson said.

He directed his audience to Genesis 6:8, which says that Noah “found grace in the eyes of the Lord,” and called them to measure their efforts against that standard. He asked, “Is [God] pleased with what we are doing as academicians, theologians, administrators, and Bible scholars? Does He find us faithful as Noah was?”

He then called attendees to stand like Noah in the proclamation of end-time events, based on the all-connecting grace of Christ. “That same heavenly grace that saved Noah … will save us,” Wilson said. “This is why the Gospel and eschatology [end-time events] are so intimately entwined.”

Called to Get Involved

Using recent evangelistic meetings in Japan, where he preached, as an example, Wilson emphasized that every member should get involved in doing something to proclaim that Jesus is coming soon. Doing our part, he reminded attendees, reenergizes the person sharing the good news. “Every time I preach … I am revived and reformed through the Word,” he shared. “Preaching … will revolutionize your teaching, your classroom, your students, your life, and your personal commitment.”

But this does not mean proclamation just for the sake of it, Wilson said. He renewed his call to scholars, professors, and leaders to remain faithful in their own lives to the doctrinal understanding and development reached by Seventh-day Adventist pioneers.

“Those Adventist pioneers pled with the Lord in fervent prayer as they earnestly studied the prophecies and deep biblical truths that have become our bedrock beliefs. … Let us not stray from those beliefs,” he said. “Let us not think of ourselves as smarter than those earnest, dedicated pioneers.”

It is against that loyalty to the Word of God, Wilson said, that we must press on and work more decidedly to share the message of Jesus’ soon second coming. “People long to hear of the hope of the second coming of Jesus Christ. Preach it. Teach it. Proclaim it. Live it,” he said.