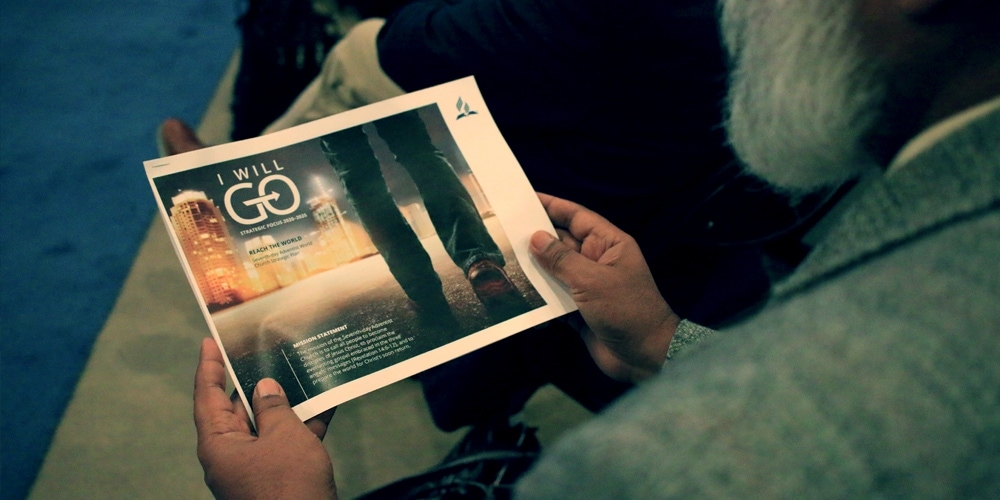 The Seventh-day Adventist Church unveiled a five-year strategic plan called “I Will Go” and approved an updated mission statement that aims to more closely reflect the wording of the Great Commission, the instruction Jesus presented in Matthew 28.

The draft strategy pursues many goals of the current five-year plan, “Reach the World,” but simplifies the plan while retaining its sharp focus on spreading the gospel and nurturing church members. It will come to a vote at 2019 Annual Council and, if approved, be implemented from the 2020 General Conference Session.

The six-page “I Will Go” plan contains 10 objectives, compared to 21 objectives in “Reach the World.”

“The floor asked us to reduce that to something we could get our arms around,” Ryan said. “So we reduced it.”

The 10 objectives start with a call “to revive the concept of worldwide mission and sacrifice for mission as a way of life involving not only pastors, but every church member, young and old, in a journey of discipleship.” Other objectives are to “strengthen Adventist outreach in large cities” and to prioritize the development of “resources for mission to non-Christian religions and belief systems.”

The strategic plan also includes a list of key performance indicators (KPI) divided into two categories: KPIs for all divisions, which the General Conference will measure through research, and “suggested KPIs” for select divisions. Ryan asked division and union leaders to review the suggested KPIs and weigh in before 2019 Annual Council.

The plan’s name, “I Will Go,” came from Argentina’s River Plate Adventist University, whose mission program has the same name. The university gave permission for use of the name and its program’s student-designed logo.

Many Hours of Research

The “I Will Go” draft is the result of many hours of work and is based on a worldwide survey by the General Conference’s Office of Archives, Statistics, and Research (ASTR), which collaborated with divisions and unions to collect data on membership trends. The 2018 survey of 63,756 Adventists in all 13 world divisions has a margin of error of +/-1 percentage point.

“We are very confident in what we are sharing,” David Trim, director of ASTR, told Annual Council delegates.

One of the KPI goals for all divisions is for a “significant increase in the number of church members regularly attending divine service and Sabbath School.” The 2018 survey indicated that weekly church attendance is down by 7 percent to 71 percent of the church’s 21 million members, compared to 78 percent in the previous survey in 2013.

“We don’t know why that is, but it is a trend that we want to reverse,” Trim said.

On the other hand, more Adventists are studying the Bible daily. The number of respondents who reported studying the Bible once or more per day increased by 7 percent to 49 percent. Trim said this extends and confirms an upward trend first detected in the 2013 survey. He gave credit to world church initiatives that started after the 2010 General Conference Session, such as Revival and Reformation, which includes a daily Bible study plan called Believe His Prophets.

“An alarming trend has been reversed,” he said.

But, he noted, many more church members should be reading the Bible daily.

Several hours before the “I Will Go” presentation, Annual Council delegates approved the revision of the church’s mission statement to read, “Make disciples of Jesus Christ who live as His loving witnesses and proclaim to all people the everlasting gospel of the Three Angels’ Messages in preparation for His soon return (Matt. 28:18-20, Acts 1:8, Rev. 14:6-12).”

The previous statement read, “The mission of the Seventh-day Adventist Church is to call all people to become disciples of Jesus Christ, to proclaim the everlasting gospel embraced by the three angels’ messages (Revelation 14:6-12), and to prepare the world for Christ’s soon return.”

Artur Stele, a general vice president of the General Conference, who introduced the updated statement, said the wording is meant to more precisely reflect the Great Commission in Matt. 28:18-20 and to incorporate the missional ideas of Acts 1:8 and the three angels’ messages of Revelation 14.

Stele also said an easy-to-remember mission statement was sought, and he considers the result to be a success.

“This is the first mission statement that I have learned by heart,” he said.