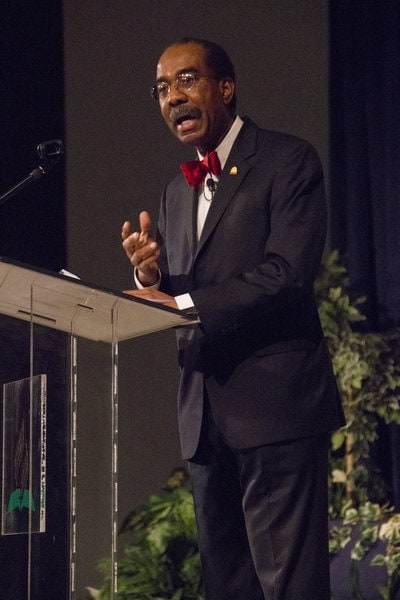 The medical school dean at University of Maryland and a Harvard
University professor have been appointed as honorary associate Health
Ministries directors for the Seventh-day Adventist world church.

Adventist Church members Dr. E. Albert Reece, distinguished professor and dean
of the University of Maryland School of Medicine, and David R. Williams, a
professor of public health at Harvard University, were approved as Health
Ministry advisers earlier this month by the church’s top leaders in the General
Conference Administrative Committee.

The duo will join a group of 10 other official advisers who offer consulting to
the department, public speaking appearances and official representation on
behalf of the denomination.

Health Ministries director Peter Landless underscored that both Reece and
Williams were selected for their spiritual commitment and support of the department’s
work through “evidence-based” health practices.

“We’re so glad they could join us. They each bring a tremendous spiritual
commitment and clarity of mission,” Landless said. “They support the
evidence-based Adventist health message through credible research and
publication.”

Landless said Reece and Williams have long served the Adventist Church with
consulting and speaking appointments without the honorary title. Reece and
Williams have known each other since they were faculty members at Yale University
in the 1980s.

Landless, who directs a team of three full-time associate directors, said more
honorary associates were needed because of the expanding opportunities for
health work worldwide.

The honorary posts are unpaid positions, and its members serve on an as-needed
basis. Each honorary associate brings expertise in a specific field of health
and health management.

Reece, a native of Jamaica who also serves as a professor at
the University of Maryland’s departments of Obstetrics and Gynecology,
Medicine, and Biochemistry & Molecular Biology, said he appreciated the new
opportunity to serve the church.

“I’m delighted to serve and be helpful in anyway I can,” he said in a phone
interview. “I appreciate the opportunity to serve, to provide input and advise
when appropriate.”

Reece will consult for the department on chronic diseases, which he said
consume nearly 80 percent of healthcare funds. Type-2 diabetes, often resulting
from obesity, has become one of the leading causes of death, he said. The key,
he said, is to focus on breaking the chain of inter-generational rates of
obesity and diabetes among mothers and their children.

Williams said he was happy to continue serving the church, with or without the
honorary title.

“I think, like most Christians, I’m thankful for the blessings I’ve received
from God, and then our obligation of every blessing we receive puts on us
greater responsibility to share,” Williams said.

Williams, who grew up in St. Lucia, is internationally
recognized as a leading social scientist examining social influences on health.
His research in the U.S. and South Africa has examined how physical and mental
health can be affected by race, racism, socioeconomic status, stress, health
behaviors and religious involvement. In 2008, he was ranked as the Most Cited
Black Scholar in the Social Sciences worldwide, and earlier this year was
listed by Thomson-Reuters as one of the World’s Most Influential Scientific
Minds.

Letters
Inbox
Confronting Painful Self-Discovery | In the Shadow of the Decree | From a New Reader | Growing the Church by Having Babies?
Release
Adventist Health Executives Lead with a Heart for Mission
Gathering prompts participants to discuss how to inspire health, wholeness, and hope.