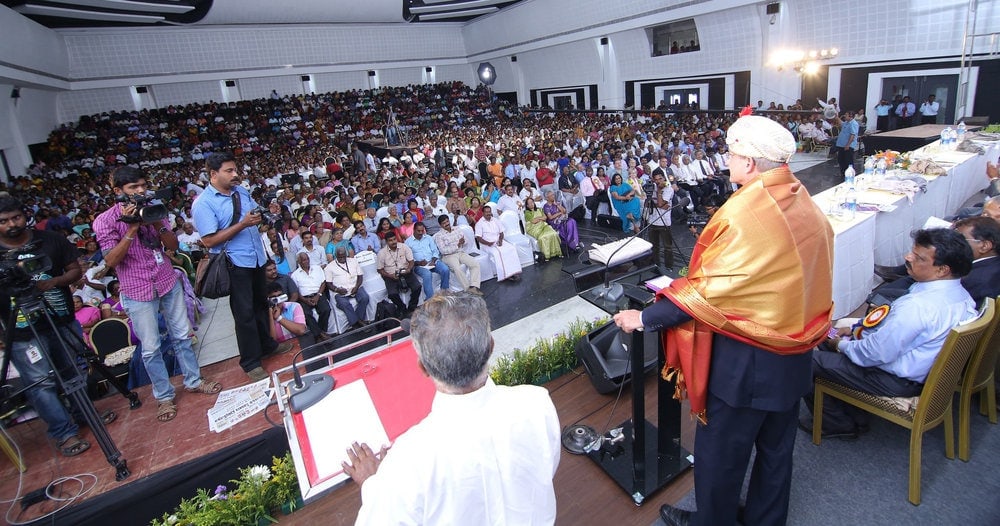 By Pothen Kurian, SUD, with ANN and Adventist Review staff

Seventh-day Adventists in the southwest Indian state of Kerala have celebrated the 100th anniversary of the arrival of the Adventist message in the arms of an Adventist bookseller from a neighboring state.

Ted N.C. Wilson, president of the Adventist world church, gave two addresses in which he emphasized that Adventists wish to serve God by responding to needs of society.

He said in an interview that he was glad to mark 100 years but that a lot of work remained to be done.

“When you are looking at a total population of 1.2 billion for the country of India, we have much to do to proclaim the three angels’ messages in this vast and complex country and in the entire Southern Asia Division,” Wilson said. “This is why an intense personal Bible study and prayer life is so important and requesting of heaven the latter rain of the Holy Spirit.”

Also at the anniversary festivities, Sri Oommen Chandy, the chief minister of Kerala, praised the church for improving Kerala with its schools and a hospital.

John Rathinaraj, president of the church’s Southern Asia Division, which includes India, told how Adventism entered the region when an Adventist bookseller named Suvshesha Muthu visited from the present-day neighboring state of Tamilnadu. Suvshesha Muthu sold several books, including Who Changed the Sabbath, Present Truth, and Steps to Christ, to a Salvation Army captain named M. Abel in Trivandrum in October 1914.

Abel grew convinced that the seventh day was the Sabbath and, after several months of Bible study, was baptized. By 1915, he had left the Salvation Army and was preaching about the Sabbath and the three angels’ messages of Jesus’ soon coming from Revelation 14.

Over the years, the Adventist Church’s work gradually expanded through health outreach initiatives and schools.

Today the church has 37,000 members, 27 schools and a hospital with a nursing school in the region. Only about 20 percent of the local population is Christian, while about 55 percent is Hindu and 25 percent is Muslim.

Interestingly, Christianity is believed to have first reached Kerala shortly after Jesus returned to heaven 2,000 years ago. Legend has it that Thomas, the disciple of Jesus, founded the first Christian church in India in what is now Kerala.