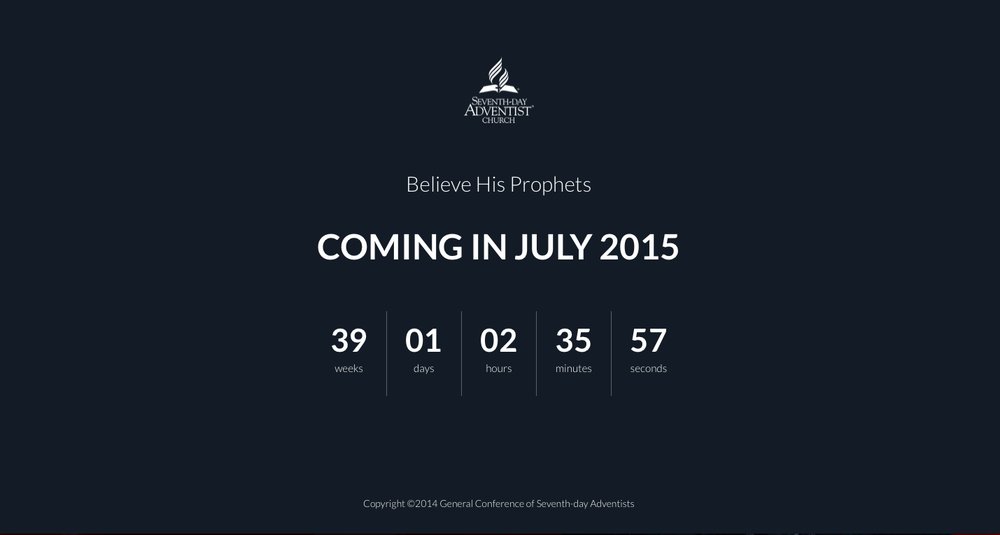 Revived By His Word, an online blog that tens of thousands
of Adventists are using daily to read though the Bible, will not end when it reaches
the book of Revelation next year.

Instead, the blog will relaunch under a new name, Believe
His Prophets, and expand to include passages from the writings of church
co-founder Ellen G. White, church leaders announced Friday evening.

People who follow the five-year study plan covering the 66
books of the Bible will also read though seven of White’s most popular books: Steps to Christ, Christ’s Object Lessons, and the five-volume Conflict of the Ages series.

“I believe it’s going to be a wonderful blessing,” said Derek
Morris, editor of Ministry magazine
and an organizer of the daily Bible reading plans.

Morris, speaking to church leaders at the second day of the Annual Council, a
major yearly church business meeting, said that even though Revived By His Word
was still three Old Testament books from reaching the New Testament, e-mailed requests
were piling up for the blog to continue.

“We have people saying, ‘Don’t stop. Maybe we could read it
through again and read some Spirit of Prophecy,’” Morris said. “So I believe
that God is leading ahead, and we are following His leading.”

Revived By His Word, which was launched in 2012, couples
each of the 1,189 chapters of the Bible with a reflective blog entry written by
an Adventist church leader or layperson. About 150 bloggers are expected to
have contributed by the time the Bible reading wraps up at the General
Conference session in San Antonio, Texas, in July 2015.

Believe His Prophets will kick off on the second Friday night
of the GC session, on July 10, 2015. Its website, believehisprophets.org, currently
shows a timer counting down the weeks, days and hours until the new Bible
reading starts.

Some blog entries from Revived by His Word will be
republished under the new reading plan in a nod to readers who might have
missed them the first time around. But White will become the primary "blogger" on
days when her writings contain a nugget on the Bible chapter being read. In
addition to the daily Bible chapter and blog entry, people will read one
chapter a week from one of White’s books.

“Our ultimate goal is to inspire as many Seventh-day Adventists
as possible to have a daily Bible reading process, to read through the Conflict series, Steps to Christ, and Christ’s
Object Lessons,” said evangelist and project co-organizer Mark Finley, who joined
Morris on stage in the main auditorium of the Adventist world church’s
headquarters in Silver Spring, Maryland.

The Conflict of the
Ages series provides commentary on the Bible from Genesis to Revelation and
comprises the books Patriarchs and
Prophets, Prophets and Kings, The Desire of Ages, Acts of the Apostles, and The
Great Controversy.

Finley said Believe His Prophets got its name from 2
Chronicles 20:20, which reads, “Believe in the Lord
your God, and you shall be established; believe His prophets, and you shall
prosper” (NKJV).

The current reading plan, Revived By His Word, also seeks
to encourage Adventists to read the Bible daily, and it was started with an aim of creating a
positive online community, Finley said. Readers can comment after each daily blog entry.

Finley said Revived By His Word
had succeeded in being positive.