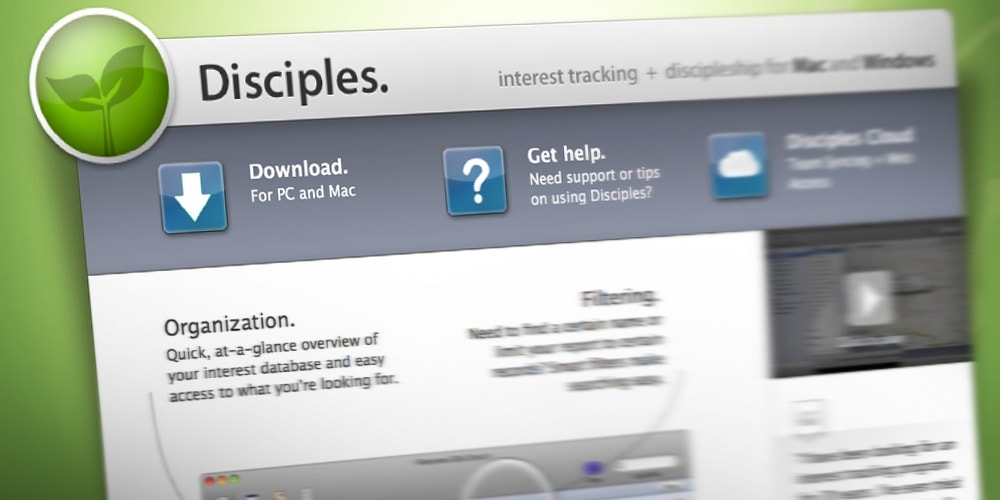 Thomas Beihl didn’t get the desired response when he went door to door at the men’s residence hall at Southern Adventist University, asking fellow students whether they had conducted Bible studies.

About 150 students had signed up to conduct Bible studies during a 2006 evangelistic series in the U.S. state of Tennessee. Beihl, a freshman at the time, had agreed to track their progress on an Excel spreadsheet.

“I didn’t even have a cell phone back then,” Beihl said. “So I would go knocking on doors in the dorm and saying, ‘Hey, how’d your Bible study go?’ As you can imagine, that flopped tremendously.”

Beihl never forgot the experience. Two years later, he began to write the software for Disciples, an organizational tool that allows local churches to track mailings, Bible studies, and attendance at meetings.

“It’s basically a digital interest list for the local church,” said Beihl, now 28 and the founder and chief executive of Disciples. He also owns a web design company in Chattanooga, Tennessee.

Disciples, available as a desktop app at GetDisciples.com, was used by Adventist churches across North America and beyond to track more than 100,000 Bible studies last year, Beihl said. Disciples is to debut as a mobile app on the iTunes store on Sept. 1 and on Google Play later.

Beihl, speaking on the sidelines of the recent ASI convention in Phoenix, Arizona, told of a young man named Jared whom he met on the street while serving as a Bible worker for his local church. He entered Jared’s contact information into Disciples and sent him an invitation to attend an upcoming evangelistic series.

Jared attended only two meetings, Beihl said in the interview, looking up the password-protected data on his laptop.

This time Jared missed only two meetings, and he signed up for Bible studies.

When the evangelistic series rolled around the next year, Jared had already been baptized, and he brought five friends and his parents to the meetings.

Church management software is available from other companies. But Beihl said his was the only one geared toward the Adventist cycle of evangelism, with specialized features such as the ability to track those who have made a decision to keep the Sabbath. Disciples is free if used on only one computer but has a US$10 fee if connected to multiple devices.

Church workers spoke highly of the software on Beihl’s website.

“Disciples is by far the most comprehensive, yet intuitive, interest-tracking software,” said Brandon Schroeder, a Bible worker with the Cornerstone church in the Canadian province of British Columbia. “It’s one of the best organizational tools I use as a Bible worker.”

Royce Snyman, Ministerial department director for the Adventist Church’s Michigan Conference, said he had looked for an interest-tracking program for 20 years and even tried to develop his own.

“Finally someone has gotten the job done with a quality, feature-rich product at a very fair price,” he said.

Disciples, like software used by many marketing companies, not only follows contacts but also detects a recipient’s possible level of interest.

Beihl spoke of a man in his 20s who received the book Steps to Christ during a church mailing in 2012. The man did not respond, and church included him in an e-mailing ahead of an evangelistic series a year and a half later.

“He opened the e-mail like 15 times,” Beihl said. “He was either opening it or forwarding it to his friends. You cannot tell the difference, but it was clearly exciting to him.”

Beihl acknowledged that some people might feel uncomfortable that software offers that amount of information. “But, he said, “just about any e-mail these days lets you know that it has been opened. That’s what marketers do.”

Such information could be useful for a local church wondering how to best direct its resources, he said.

“While God is working in everybody’s life, some people are really responsive and at a place where God is really trying to bring them in,” he said. “Would you rather be spending your time with someone who is less interested in spiritual things or somebody who is potentially more interested?”

The young man who opened his e-mail 15 times ended up becoming the first person to make a decision for Jesus during that evangelistic series, Beihl said. He is now training to become a Bible worker — and will use Disciples in his work.