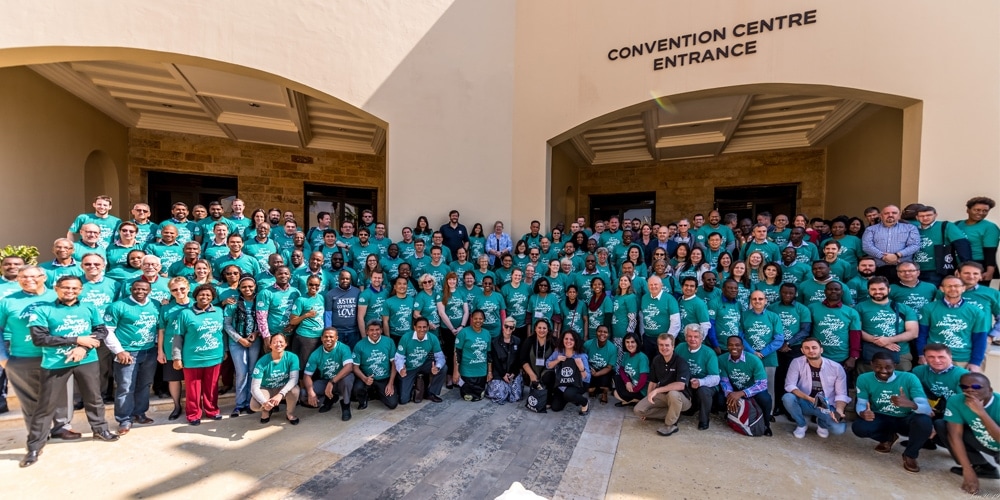 The annual assembly of ADRA’s directors and associate directors convened in Sweimeh, Jordan in February 2019 to discuss areas of improvement regarding finance, development, partnership, programs, and marketing, and address how ADRA can be relevant to the needs of an ever-changing society.

A leadership summit kicked off the meetings, introducing three pillars of thought for ADRA’s leaders to consider in the coming year, namely to create clarity, generate energy, and thrive.

“Creating clarity asks ‘why’ we exist as an organization and helps provide a focus on delivering our mission,” said Korey Dowling, ADRA’s vice president for people and culture. “Once clarity exists, we generate energy asking ‘how’ we can drive organizational culture and create employee engagement. Lastly, we unleash a thriving culture of leaders by growing people personally, professionally, and spiritually.”

Participants were also introduced to an array of workshops and plenary classes. Leading experts and specialists spoke on topics of spirituality, influential leadership, employee relations, diversity, work ethics, and mentoring, to name a few.

Karla Cole, director of annual giving at ADRA, attended a creative workshop focused on storytelling, in which Bill Knott, executive editor of the Adventist Review and Adventist World magazines, was the presenter. “I found the storytelling workshop to be a unique way to inspire our fundraising strategy,” she said.

“Storytelling is as much what the teller says, but also what the listener hears,” Knott said during his storytelling workshop. “A story can be internalized by the hearer to make it his own and be changed by it.” He added that every culture uses stories and that stories have the power to let God speak to each individual and their personal narrative.

“These workshops really helped me see what possibilities I can do to apply in our country office,” said Prisca Chileya, assistant emergency management coordinator at ADRA in Kenya. “I hadn’t been exposed to this information before, and it’s helped me to think differently on how to do business. Now, I have so many ideas running in my head about what we can do to help school girls and the environment.”

“Two years ago, ADRA surveyed the country offices to get a sense of who ADRA is,” Duffy said. “We discovered that ADRA is great at developing long-term programs, emergency response, human rights, but we lacked in our faith identity, and how we work is misconstrued.” Duffy further explained that ADRA has three things in its favor: the agency is fueled by faith, has an extensive network of 20 million people connected to the church, and is locally led and dependable.

These findings led to ADRA coming up with its new purpose, according to Duffy, which he shared: “Serving humanity so all may live as God intended.” Duffy also added that ADRA is different from other humanitarian agencies because “we strive for all people to live as God intended with justice, compassion, and love — three descriptors that will become ADRA’s new motto.”

Along with the new purpose and motto, ADRA’s new logo was described in detail by Salvador Montes de Oca, ADRA’s associate director of design.

“The feet of the people have been removed, making the logo more prominent. The color is also now a near green color,” said Montes de Oca. Another change he shared was that country names will not be associated with ADRA. “The brand is now ADRA across the board, to be more unified,” he said.

At the end of the presentation, each country office received an ADRA style guide on a USB drive, and a teal-colored T-shirt imprinted with ADRA’s new purpose statement.

A Call for Social Justice

Duffy also announced ADRA’s new global advocacy campaign called “Every Child. Everywhere. In School.” The campaign aims to collect one million signatures by July 2020 through grassroots efforts in partnership with the Adventist Church.

The 131 ADRA offices pledged support for the campaign, and some offices already took to social media to spread the message.

“As a church, we have felt very comfortable saying we’re the hands and feet of Jesus, but we feel a little less comfortable in saying we’re also the voice of Jesus,” Duffy said. “Right now there are 262 million children who don’t have access to education, and for them to have that access is the key to unlocking many inequities they face, like childhood marriages.”

ADRA then commenced its joint meeting with the Global Adventist Internet Network (GAiN), which ran for an additional week.