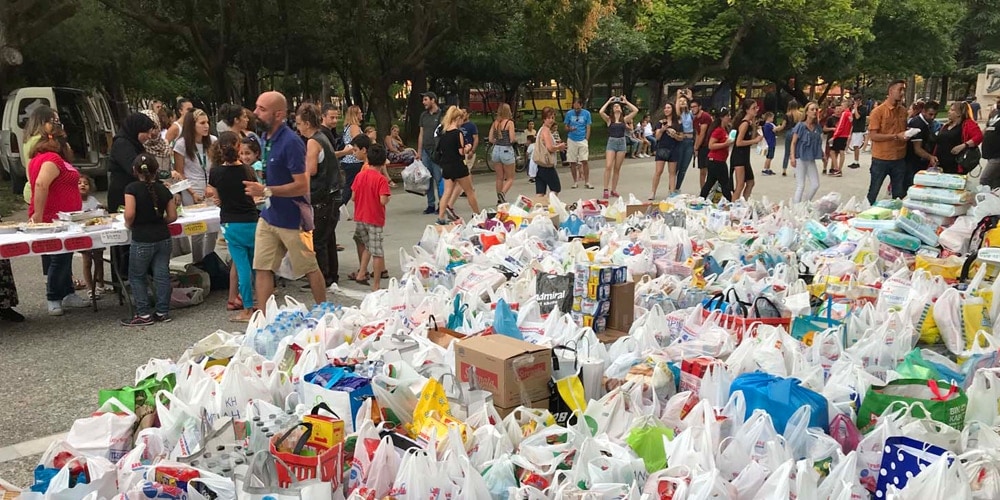 With more than 90 dead, almost 200 injured, and more than 2,000 homes destroyed following deadly wildfires near Athens, Greece, the Adventist Development and Relief Agency (ADRA) is already working to provide support. The fires, thought to be the deadliest on record, broke out on Monday, July 23, 2018. Mati, in east Attica, is thought to be the most affected area.

Despina Tologlou, lead person for ADRA operations in Greece, was planning a Tuesday-evening event supporting refugees in Katerini, about 410 km (255 miles) north of Athens, when news of the fire came through. She transformed the event in the city park into a fund raiser. Local citizens donated bottled water, food and hygiene items, basic drugs, and baby supplies to assist those affected by the fires. As of July 26, 240 boxes of supplies had been provided.

Greek prime minister Alexis Tsipras declared three days of mourning together with a state of emergency in the Attica region, saying all emergency services had been mobilized. Help has also come in the form of firefighters and equipment from France, Germany, Italy, and Poland.

“It is impressive to see how solidarity works within this nation,” states Tihomir Lipohar, head of mission for the ADRA refugee response in Greece. “The citizens of Greece have shown great compassion supporting refugees and migrants who flooded through their country in recent years. Now as they pull together as a nation in the light of this tragedy, they need our support.”

Working closely with the authorities, ADRA is now in the process of distributing supplies in the affected areas, but, Lipohar states, more is needed. “Now, it would be great to support this nation in its response to the victims of deadly fires in Mati and other places in southeastern Greece,” he said, as volunteers plan to work together with Boy Scouts, the Greek military, and local authorities.

Devastation is widespread, according to Evangelos Bournous, the mayor of Rafina. He told reporters that his village “no longer exists.” The Greek government’s Ministry of Infrastructure announced on Thursday that 49 percent of buildings inspected across Mati had been deemed uninhabitable.

“ADRA Europe is working together with the ADRA network to support initiatives in Greece during this emergency,” said ADRA Europe director João Martins. They are looking at their emergency funding, he noted, but extra donations are especially welcome at a time like this.

Last year, forest fires crept to within a few meters of the Adventist youth camp at Kalamos, 50 km (about 30 miles) northeast of Athens. At that time, the camp was evacuated as a precaution on the Monday following an outbreak of fire some 2.5 km (1.5 miles) from the site, but that was soon extinguished, and summer camps continued. The Adventist site is 45 km (28 miles) away from this year’s devastation in Mati.

Greek Mission president Claudio Gulyas reports that no church members appear to have been injured or their property damaged during the most recent fires. The Adventist Church, together with ADRA, will do all it can to help the many families who have been affected by this tragedy, a spokesperson said.