A World in Miniature 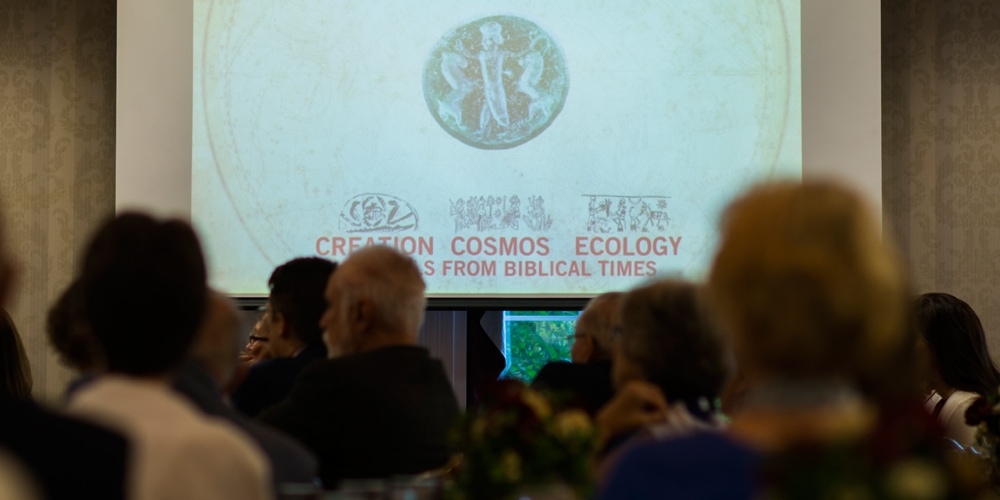 Those participating in the September 12 opening of the new exhibit of the Lynn H. Wood Archaeological Museum at Southern Adventist University (SAU) quickly knew they were in for a treat, when Professor Benjamin Foster, curator of the Yale Babylonian Collection at Yale University, and a special guest on the opening night of the new exhibit said in his remarks: “This is the finest exhibition on ancient seals in terms of presentation, approachability, and scholarly input that I have ever seen.”

When the crowd of special guests and dignitaries visited the state-of-the-art exhibit later, they could see for themselves that the museum team had succeeded in presenting a key communication tool of ancient societies for a twenty-first century audience in a way that was understandable. “A World in Miniature: Creation, Cosmos, Ecology on Seals from Biblical Times” attempts to bridge a huge gap in space and time, using digital technology, careful design, and focusing upon three key questions of ancient and modern societies. Where do we come from? How does this world work? and How can we live responsibly in an environment that often suffers from human degradation? sound like questions a millennial could ask—and yet, they were also questions that moved people living in the ancient Near East in biblical times.

Remarkably, the miniature art contained on ancient seals, often as small as a fingernail, offers a richness of topics and themes that speak of their world and worldview. These intricately made seals “bring together on a very small space concepts of creation, cosmology, and ecology,” said Professor Martin Klingbeil, associate director of the Institute of Archaeology at SAU and the leading researcher for the exhibit.

These big themes all blend together in the wholistic worldview of ancient people, he continued, emphasizing that life in ancient times was not as compartmentalized as it is often considered today. They are, in a sense, “a window into the ancient world.” “We can learn from the past and integrate it into our belief system,” said Klingbeil. Then, with a smile, he shared his personal favorite seal, number 41 of a total of 55 objects exhibited, on loan from the Yale University collection, showing a human figure defending a cow giving birth to a little calf against a wild lion. It shows how humanity domesticated the animal world, but at the same time is also protecting it.

Loren Howard, an artist and long-standing collaborator with the Lynn H. Wood Archaeological Museum, worked some miracles in the mounting and presentation of the tiny artifacts and also reconstructed ancient seal-making tools for a hands-on display located in an ancient workshop where visitors to the museum can roll or print their own take-home impressions of ancient seals. “They always come to me for the really challenging pieces,” said Howard, “I enjoy the challenges, always trying to figure out what materials to use, the most efficient way of getting something done.” Besides the impressions of the seals that accompany every artifact in the exhibit, Howard also made a detailed replica of a Kudurru, an ancient Mesopotamian boundary stone housed in the Louvre in Paris, that nicely brings together how ancient people viewed the world. “When you think about how people were able to do this detailed work, it really brings a new perspective on how smart folks had to be,” Howard continued as he showed some of his replicas. “Making a perfectly cylindrical piece of quartz that has nearly no flaws and has insane details carved into it is just beyond me.”

“Making a perfectly cylindrical piece of quartz that has nearly no flaws and has insane details carved into it is just beyond me.”

Emlyn Da Silva, a junior and archaeology major at SAU, was part of the team that helped develop the exhibit. She spent last summer with the SAU team excavating at Lachish in Israel. “I felt we weren’t there long enough,” she said with a big smile. “Everything that I learned in class came to life; I loved the culture, the work, what we found.” Asked about the link between the Bible and archaeology Da Silva said that her studies have given her a broader foundation to respond to challenges to her faith. “I went to public schools, so I was often challenged with my faith. I am very passionate about this link between the Bible and archaeology.”

This important link between Scripture and the material ancient world was also underlined by Professor Michael Hasel, director of the Institute of Archaeology at SAU. The Lynn H. Wood Museum offers a way to reach the community in Chattanooga, which, according to Hasel, has been described as “the buckle of the Bible belt.” School groups, church groups from all denominations, and those with a special interest in biblical archaeology come and visit the museum. Depending on the exhibit, Hasel estimated that between 2,000 and 4,000 people go through the museum every year, in addition to the 3,000 students on campus. “We felt that when the artifacts arrived here that the museum was a tremendous way of bringing the Bible to life.” Archaeology helps to fill out many of the gaps that the Bible sometimes leaves open. We can learn about daily life, about commerce, about families, about life and death. “In our media-driven world today,” continued Hasel, “where everybody wants to touch and feel and see, there is nothing like archaeology. When you hold an artifact in your hand, which has somebody’s fingerprint on it, or a seal impression on it, it’s almost like reaching back and shaking somebody’s hand.”

“A World in Miniature: Creation, Cosmos, Ecology on Seals from Biblical Times” is another way of reaching back in history, helping visitors to not only understand daily life, but also the way people thought about the big questions of life. As the first visitors walked through the newly opened exhibit and interacted excitedly with the objects, the looks on their faces showed that they had just caught a glimpse of how ancient people tried to answer some of these big questions. As they left the exhibit, they realized that, even in antiquity, big questions deserved big answers.