A WHO Leader Thanks Adventists for Embracing Ellen White’s Teachings 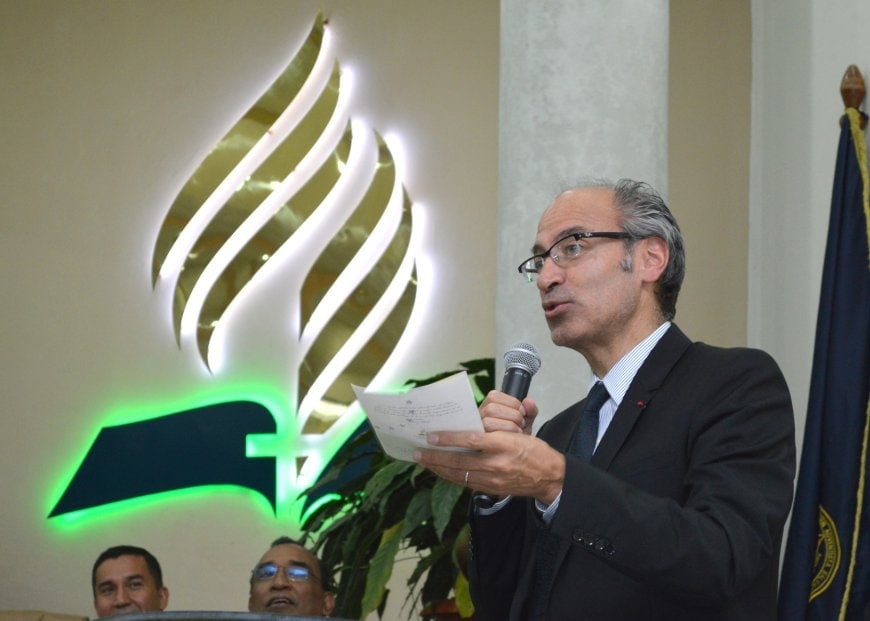 The World Health Organization has recognized the Seventh-day Adventist education system as a promoter of health across El Salvador, and a senior WHO official has expressed gratitude that the church embraced the counsel of its cofounder Ellen G. White.

The WHO’s EPODE International Network, which works with governments to ensure the sustainability of community-based programs and obesity prevention worldwide, certified the 25 Adventist grade schools and high schools across the Central American country during a special ceremony at the Adventist Training School of El Salvador in the town of Opico, about 40 kilometers from the country’s capital, San Salvador.

“Ellen G. White said more than 100 years ago that health should be cared for, and you as Seventh-day Adventists, having this valuable message, need to say it loudly,” said Armando Barriguete, president of the EPODE International Network.

El Salvador’s health minister, Violeta Menjivar, spoke about the increase in obesity in the country.

“As a government official, as the health minister, I am alarmed about the increase in obesity and health problems affecting children and youth in El Salvador,” Menjivar said.

The figures are alarming. A 2014 national health survey found a 50 percent increase in obesity in children ages 5 and younger in recent years.

Menjivar said the government wanted to partner with the Adventist education system with “I Want to Live Healthy,” an initiative of the Adventist Church’s Inter-American Division that promotes eight natural remedies needed to live a healthier life: water, rest, exercise, sunshine, air, nutrition, temperance, and hope in God.

“Use all the means of communication to make your initiative known,” Menjivar said. “We want to join you so that we can contribute to improving health in El Salvador.”

Belkis Archbold, health ministries director for the church’s Inter-American Division, which includes El Salvador, congratulated church leaders and educators for their pioneering work in getting the initiative certified with EPODE International Network. El Salvador becomes the second country in the Inter-American Division to include the “I Want To Live Healthy” initiative in all of the church’s Adventist schools. Adventist schools in northern Mexico began implementing the initiative in all of their schools last year.

“A child who eats healthy will become a healthy adult,” Archbold said.

Healthy students, teachers, and parents are precisely the goal of the healthy initiative, said Xenia Burgos, education director for the church in El Salvador.

Burgos said the initiative began with the training of the 285 teachers in the local Adventist education system. They taught concepts, principles, and ideas on how to implement the program from pre-school to high school classrooms.

“Our teachers enrolled in the plan themselves,” Burgos said. “We learned, lived, and practiced the eight healthy habits ourselves and made true changes in our lifestyle.”

After eight weeks of living a healthy lifestyle, teachers led a week of health emphasis in each of the 25 Adventist schools. The week after, students were challenged to put into practice the natural remedies for the following eight weeks.

“We wanted to make sure our students had only healthy foods available to them in our snack stores at every school,” said Burgos. “This made a tremendous difference as well.”

The health initiative presents a great opportunity for the 65 percent of enrolled students in Adventist schools who are not Adventists, Burgos said.

“Ellen G. White stated in chapter 40 of her book Education that when students leave our schools, they should be in better health and understand the laws of health better than when they entered, so we believe this is very important and will continue to implement in our schools,” Burgos said.

Commentary
Oakwood University Celebrates 125 Years of God’s Providence
The historically Black Adventist college opened its doors on November 16, 1896.
Commentary
Adventists’ Passion for Service Is a Force to Be Reckoned With
At the AMEN conference, attendees give away snapshots of their commitment to service.
News
GC Secretary’s Report Outlines Adventist Church’s Challenges and Extensive Blessings