​A Peek Behind the Scenes at GC Session 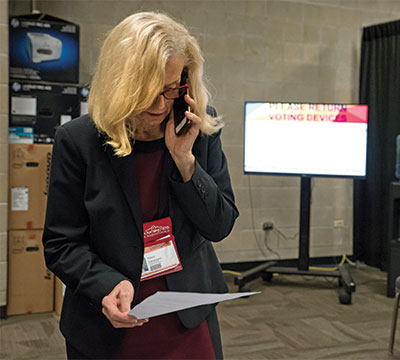 Days after delegates return home from the General Conference (GC) session, a crew will still be packing up and shipping truckloads of equipment back to the world church’s headquarters in Silver Spring, Maryland.

Like the conscientious captain of a parting ocean liner, they were the first to arrive in San Antonio and will be the last to leave.

“This is a big ship, and the whole team here is steering it to take it successfully to the harbor,” said Artour Vasmout, director of Information System Services for the General Conference. “The first plans were laid years ago, and now we are getting close to our destination.”

Starting in the summer of 2014, Vasmout’s team conducted interviews with every GC department involved in the session to determine their equipment needs and acquire it for shipment to San Antonio. His department shipped 85 desktop computers, 50 laptops, 45 printers, and miles of network cable, among other equipment.

At the front end of the Alamodome, at floor level and just before the stage, is what Vasmout calls “the cockpit of the ship.” This is the place where GC information software developer Ean Nugent fields delegates’ requests to speak on a screen, after they scan their badges at six different stations across the floor.

“The system’s debut was two GC Sessions ago,” Nugent said. “But for this session it has undergone important updates.”

Team members seated beside him make sure the delegates’ names appear on large screens in the stadium when they stand at one of six microphones at the strategically placed stations across the floor. They also ensure that a two-minute countdown starts as soon as a delegate begins to speak.

Half a mile (800 meters) northwest of the Alamodome, the bustling Henry B. Gonzalez Convention Center confirms that nothing is as simple as it seems at an event of this size. Hotel assistants, security personnel, and food services managers come and go to make sure everything runs as smoothly as possible.

“This is just the main dining area,” said Adrian Hamblin, assistant to the director of food services, as he waved goodbye to guests after lunch. “There are three additional smaller dining halls set up at the Alamodome.”

By smaller, he means that the three halls combined feed about 1,000 people: the Alamodome technical staff, members of the North American Division, and the nominating committee. The convention center hall feeds 5,000 delegates, guests, and their families on weekdays and 7,000 on weekends.

Hamblin, who actually works for Hope Channel at GC headquarters in Maryland, has switched from his television scheduling responsibilities for a few days to make sure people can get their cards scanned and access the eating area as fast as possible.

“We have a dozen volunteers helping us with the scanning process,” he said. “And with multiple scanner access points and 20 buffet lines on both sides, our goal is to get 4,000 people eating in no more than 30 minutes.”

Nancy Lamoreaux, GC chief information officer, who is overseeing the logistics, called the volunteers the unsung heroes of the session.

“Even when most people may not see them, their commitment and hard work has made a world of a difference,” she said.

Even with the assistance of the mostly young volunteers, the logistics of the Session would not be complete without the support of local and national companies that competitively bid for contracts to provide additional services in the Alamodome.

“We’ve brought two and a half semis of just lighting equipment,” said David Jackson, lighting designer for ID Systems, a Houston- and San Antonio-based company that provides lighting and audio solutions to massive public gatherings. “If we take into account our audio systems, well, we are talking about five truckloads of equipment.”

Another company provides the event’s staging, which includes the setting up of risers and platforms, as well as flow pipe and drape systems, railing, and ramps. And yet others provide video screen, audio, and wireless solutions.

“There is a whole crew of technicians working here,” Jackson said. Labeling and re-labeling is a big thing in the Alamodome. Sports offices suddenly have become rooms for board meetings, and the home-team locker room has transformed into “Platform Management” headquarters.

“We are in charge of the flow of the worship service,” said Kenneth Denslow, platform director for the event, speaking on behalf of a dozen people working in his makeshift office. “This includes overseeing the coming and going out of the platform, the flow of the music, and generally speaking, the seamless roll of the program.”

Denslow said his team works in consultation with the program committee, a larger body responsible for everything that happens on the stage other than the business meetings. He said his team has come a long way in the weeks and months leading to the session.

“Reaching this point has demanded countless hours spent in meetings and planning,” he said.

Up on level four of the Alamodome, volunteers interpret from the English spoken on the floor into a dozen languages.

“I am here because the Lord has been very good to me and because my wife covered my airfare,” interpreter Benjamin Giang said with a smile.

Giang, a chemist by profession, came out of retirement to serve as a Chinese-language interpreter in California courts.

Interpreters at the session are not paid for their task, though some of them get free meals or get their expenses partially reimbursed by their local fields. The job can be challenging, especially when delegates speak quickly at the microphone on the main floor far below.

Samuel Simorangkir, communication director for the West Indonesia Union Mission and interpreter into Bahasa Indonesian, said the trip to San Antonio was easy.

“I used money from my own pocket to get here,” he said with a sigh. His local church territory covered half of his traveling and lodging expenses.

“Still, I consider it a blessing,” he said.