A Mentor and a Missionary 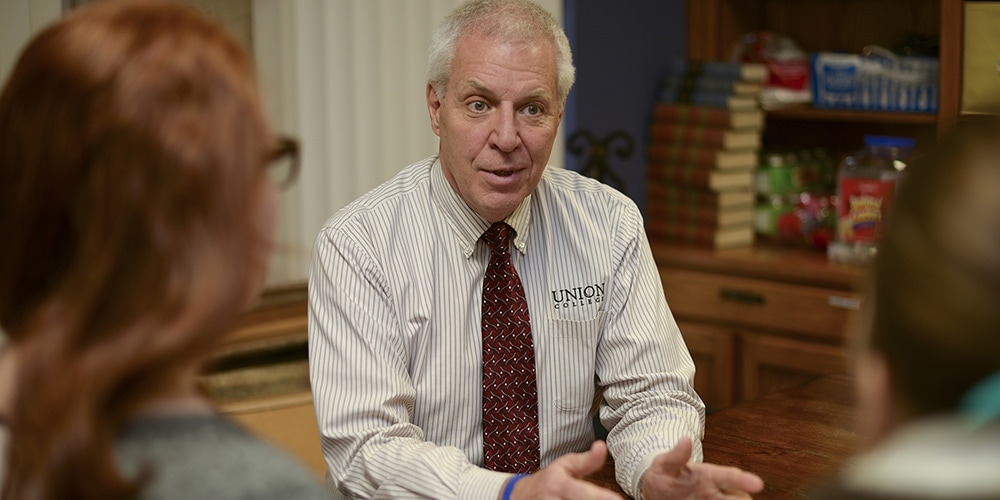 Recounting his experience as a student missionary in Peru, a junior at Union College in Lincoln, Nebraska, United States, was quoted in the Central Union Reaper regional church publication in October 1971 saying, “You must win them over with your love. You must come with the attitude of wanting to learn, not feeling that you have everything to offer them.” A decade later, that student returned to the Adventist-operated school as an employee, claiming his alma mater as his mission field. Alumni of the last 35 years will recognize in those words the leadership style of a man they learned to love as a listener, learner, counselor, and friend.

Officially, he is Richard Carlson, vice president for spiritual life and associate professor of psychology and religion, but it is unlikely even he could tell you his full title without consulting the school’s personnel directory. To generations of Union students and alumni, he is simply “Pastor Rich.” And above any title, he will tell you his job is mentorship. “I love interacting with the kids, journeying with the students,” he says. “It’s been a joy and an honor.”

A Passion for Missions

In 1971, Carlson told the Central Union Reaper that, “A thousand years of school can never equal the experience of mission service.” As chaplain at Union, he has encouraged thousands of students to take their lessons from the classroom to communities next door and around the world as they learn through service.

Through his leadership, Union has sent 617 student missionaries around the world

Through his leadership, Union has sent 617 student missionaries around the world, and 85 task force workers to Adventist organizations within the United States. His continued involvement in student missions reaches past Union’s Campus Ministries and extends to visiting and supporting student missionaries on behalf of the North American Division.

Emily Segura remembers the joy of having a familiar face visit when she served in Guinea. “He came to Africa and met my host family, followed me around through my daily life of shopping in the outdoor market, teaching in my tiny school room, and eating rice with me,” Segura said. “You should have seen his excitement merely at presenting the gifts and letters from home and watching me open them. I appreciate his grandfatherly love and the empowerment he gives me to make my ‘what-ifs’ a reality.”

Carlson also recognizes the need for service closer to home. Project Impact began as Project BRUSH the year before he became Union’s chaplain, and under his leadership, Union’s annual event has become the nation’s largest and oldest collegiate volunteer event. From available research, no campus has a bigger event by percentage, and few have as many volunteers despite 10 to 20 times the enrollment.

“Service isn’t just a one-day event,” said Cainan Ming, who has been the student coordinator of Project Impact for the last two years. “I hope students get a sense of joy from helping others and will revisit the sites. I don’t want us just to take one day of the year; I want these service projects to continue.”

Beyond Project Impact, Union’s Campus Ministries organizes volunteer opportunities for students throughout the year, from regularly scheduled events to responding to last-minute desperate pleas from individuals and groups around the city of Lincoln.

When he assumed his role of chaplain at Union College in 1982, Carlson and one student worker managed all the programming for Campus Ministries. Now the office has grown to engage a staff of 35 students leading in all areas of ministry, including vespers, worship, missions and outreach activities. “This gives them leadership training and keeps what we do current to the needs of students,” he says.

Carlson is quick to clarify for anyone who asks that he has only two duties—providing the environment and the opportunities that allow students to lead. He seeks out students with a passion for ministry, then works with them to make sure they have the resources they need to succeed as they dedicate their skills and energy to Christ.

Talking to Union students, it’s easy to find stories of how Carlson’s leadership style has changed their lives for the better. Jesse Evert, now a junior education major, recalls coming to Union as a freshman and looking for a way to belong and get involved in ministry. Carlson heard about Evert’s interests in script writing and acting and approached her to write and direct the annual Easter Pageant during Homecoming weekend, which she did with the help of her best friend.

“That experience opened the door for me to work in Campus Ministries for a year and a half,” Evert said. “All because Pastor Rich saw something in me and thought he could help me make a difference.”

As he works with students interested in pastoral ministry and chaplaincy, Carlson encourages them to build a team before moving forward in ministry. “Working with Pastor Rich has taught me to extinguish the corporate idea of delegation—the concept of demanding work from employees,” said Abner Campos, a senior theology major. “Instead, he invites us to empower, because it is through empowering that we experience the intersection of our gifts, passions, and calling.”

According to Gina Creek ’03, Carlson is the best leadership mentor she’s ever encountered. Now director of leadership development at Adventist Health System, Creek said, “Before Pastor Rich, I always saw myself as another face in the crowd. He helped me hear the call of God on my heart.”

He also encouraged other employees to become spiritual mentors through his innovative HeartScan program. Interested students meet throughout the semester with a spiritual mentor who helps them develop a spiritual growth plan instead of keeping track of regular worship program attendance.

Back in 1995, Carlson began writing a daily email to everyone on campus—most often a devotional thought based on a scripture passage he had been reading. He has faithfully emailed these messages every school day.

“Almost every day I get at least one e-mail from someone saying how God has used the thought for that day,” Carlson said. “Sharing the thoughts God brings me each morning gives my personal experience with God a purpose beyond just me.”

An original version of this story appeared on the Union College website.