A Doctor Sets Out to Heal His Community 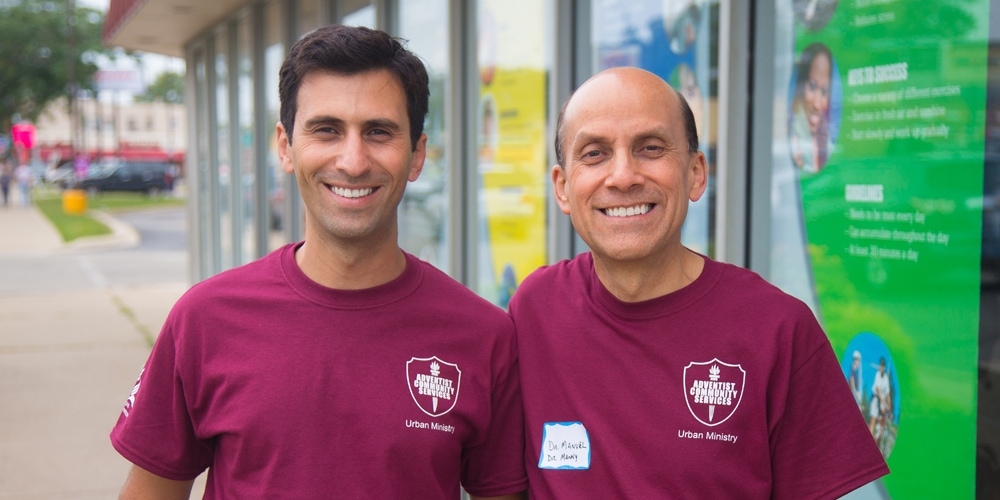 The nondescript building sits on a busy stretch of Ogden Avenue eight miles west of downtown Chicago, Illinois, United States. As you enter the doors on any given weekday, chances are you’ll see office staff combing through stacks of patients’ charts, while a fit, middle-aged man in a doctor’s coat darts from one examination room to the next. Come evenings, the same office is transformed into a classroom for healing and, on Saturday’s, it’s a church for a Hispanic congregation.

Since this multi-use facility opened in May, along a stretch of the historic US Route 66 thoroughfare, it has served a testament to the hard work of a gastroenterologist melding a desire to not only treat patients but also help them overcome preventable diseases.

Peruvian-born medical doctor Manuel Alva wasn’t always a poster child for a healthy lifestyle. While a medical student at Montemorelos Adventist Medical School in Mexico — learning about the benefits of nutrition, exercise, water, sunlight, temperance, air, rest, and trusting in God, he would eat whatever he wanted.

‘Okay, God, I get the message. What you have told us as a people works.’

By the time he moved to Chicago to do his residency, his blood pressure was extremely high and so was his cholesterol. He vowed to do better and turned to his wife, also a physician, for help. It meant no more eating out at the hospital and giving up some of his favorite foods.

Two months later, he went back to his doctor and received startling news. His blood pressure improved drastically, and his cholesterol level was much better. “I said, ‘Okay, God, I get the message. What you have told us as a people works.’”

He decided to share what he had learned and began conducting health programs at his church. Meanwhile, he noticed that he was seeing sicker and sicker people in his clinic.

“God has given us tons of patients that are sick with reflux, with constipation — those two are complaints that we hear day in and day out,” he said.

He decided to host health education classes each Saturday morning, as part of the weekly church service. These were held in unlikely venues: a hospital waiting room; a carwash.

Elton DeSousa had just earned a theology degree and offered to help Alva with the group’s spiritual needs. He saw an opportunity to extend the reach of the gospel in Chicago where he notes, “We have a huge population and every time we try to communicate the gospel message to a secular community it’s difficult to teach them with the old traditional methods we’ve always used in the past.”

Through a series of miracles, Alva purchased the Ogden Avenue building, and plans are well underway for a center of influence. Currently, there are nutrition, exercise and massage classes, with plans to add cooking and stress management.

“One of the things I love to hear,” said Illinois Conference church region president Ron Aguilera, “is when our medical professionals get involved and meet the physical needs of our community. The best way to connect is by medical. It’s a great way to connect and build a community.”