More than 800 people have been baptized after a three-week evangelistic series in Papua New Guinea, and more baptisms are expected next month.

Australian evangelist Gary Webster led the meetings, titled “Ancient Mysteries Reveal the Future,” in the country’s capital, Port Moresby, and the program was uplinked via satellite to more than 230 sites across the territory of the Adventist Church’s Central Papua Conference.

Thousands more Click TV subscribers watched from home in Papua New Guinea and other places in the South Pacific.

“The messages brought hope and motivation for change in young and old, among believers, nonbelievers and many other people from different walks of life,” the Central Papua Conference said in a statement.

Pastors have been busy conducting baptisms since the program ended on March 26. At least 800 people have been baptized, including local leaders, believers from other denominations, high-profile community figures, former Adventists, couples, families, and students.

Darei Romaki, officer-in-charge of the Manabo coconut plantation, had been attending a Sunday church but said he was convicted by the Holy Spirit after listening to the seventh-day Sabbath message.

Alex Aia Apana, a Sunday school teacher for another denomination, said he had never read the Bible even though he taught in church.

“I looked after 1,500 people in my church at Babiko village,” he said. “I had no idea of the Bible and never read a Bible in my life. I didn’t know the truth.”

He was among the people baptized at the Hohola Seventh-day Adventist Church, where Webster spoke.

Webster, president of the Tasmanian Conference in Australia and head of the South Pacific Division’s Institute for Public Evangelism, said he had been greatly blessed by his time in Papua New Guinea.

“When you share the Word of God, you are enriched,” he said.

A follow-up program is scheduled for June when Webster will return to Port Moresby and speak about the seven seals in the book of Revelation. 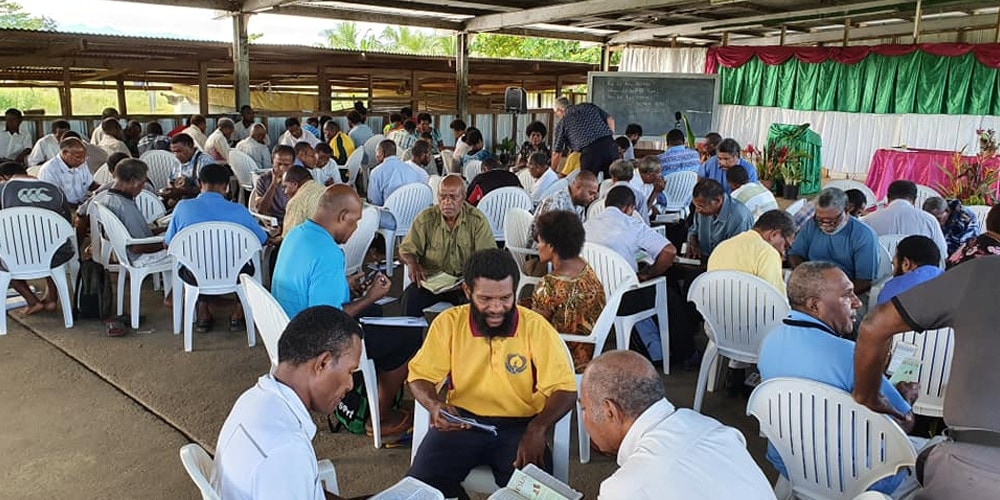