7 Biggest Stories That Shaped the Adventist Church in 2014 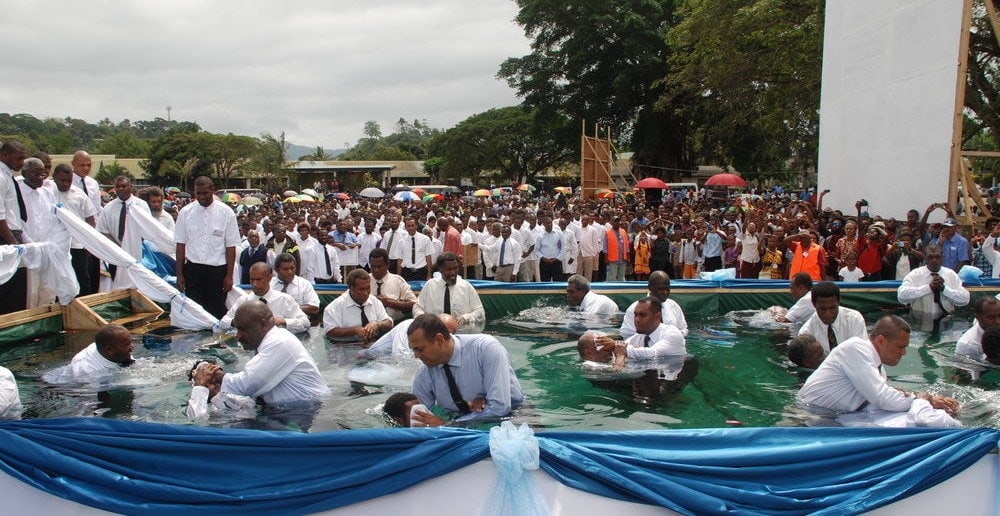 Even as global conditions deteriorated with threats of war and disease, the Seventh-day Adventist Church forged ahead with its mission of proclaiming Jesus’ soon coming in 2014.

The success of those efforts are especially visible in the church’s Mission to the Cities initiative, which tops our list of the biggest stories that shaped the Adventist Church over the past year. The initiative, which shares Jesus in big cities through a combination of evangelistic series and community outreach programs, yielded tens of thousands of baptisms in dozens of countries around the world.

Many of the other major stories on our list are more connected with matters of church administration, policy, and doctrine than with mission service.

But the Adventist Church was actively engaged in the world’s biggest news stories—Ebola and conflicts in places like Iraq and Ukraine—by treating the ill and providing food and shelter to refugees.

Here are the seven biggest stories in the Adventist Church in 2014.

1. Mission to the Cities takes off.

Mission to the Cities, an initiative to share Jesus with residents of the world’s biggest cities, was launched in New York in 2013. But the campaign really took off in 2014, with tens of thousands of baptisms, and is poised to grow further in 2015.

The highlight for the initiative was “Hope Manila 2014: iCare,” a yearlong, $1.2 million project to share Jesus with the people of Manila and especially with the Philippine capital’s leading businesspeople and politicians. In May, Adventist Church leader Ted N.C. Wilson led a two-week evangelistic series in Manila while other church leaders simultaneously conducted meetings at 75 other city sites.

More than 10,000 new members have joined the Adventist Church under Hope Manila, including 3,152 people baptized at the meetings led by Wilson over the first three Sabbaths of May.

Mission to the Cities projects also unfolded in Austria, Bulgaria, Tahiti, Ghana, and many other countries. Notably:

Next year, more than 40,000 people are expected to attend a two-week evangelistic series in Harare, Zimbabwe, in May. In San Antonio, Texas, church leaders are also bringing together doctors and other heath professionals to offer free medical services to people at the stadium that will host the 2015 General Conference session in July.

2. Caring for those affected by Ebola and conflict.

The Adventist Church has long sought to follow Jesus’ example and assist people who are hurting. But those efforts took on a more visible character this year with efforts to provide treatment and relief to people affected by the Ebola virus in West Africa and conflict in Iraq, Syria, and Ukraine.

ADRA, the Adventist relief agency, has been at the forefront of these efforts.

In West Africa, ADRA has teamed up with Loma Linda University and other Adventist organizations to deliver much-needed medical supplies and equipment to hospitals dealing with Ebola. ADRA is also feeding thousands of people and educating people on how to avoid infection.

Elsewhere, ADRA has provided food and other essential items to African boat migrants in Italy, victims of deadly floods in Nepal and the Balkans, and refugees in Iraq and Syria.

In Russia and Ukraine, ADRA has fed and sheltered scores of people who have fled fighting in east Ukraine. Jill Biden, wife of U.S. Vice President Joe Biden, was so impressed that she lavished praise on ADRA during a visit to its center in Kiev in November.

The question of women’s ordination has been widely discussed since Adventist leaders agreed at the 2010 General Conference session to take a closer look at the issue. But several of the most significant steps took place in 2014.

In June, the Theology of Ordination Study Committee completed a two-year study to determine whether a consensus could be reached on women’s ordination. Members of the General Conference-commissioned committee concluded that a consensus could not be found.

Then in October, delegates at the Annual Council, a church business meeting, voted to ask the 2015 General Conference session whether each of the church’s 13 divisions should be able to decide for themselves on whether to ordain women.

Meanwhile, Adventist leaders have confirmed their unity despite differences over ordination and have urged church members to prayerfully study the issue for themselves.

Church leaders prioritized plans to make every Adventist church a community health center several years ago, but the initiative gained significant momentum in the summer when 1,150 participants from 81 countries attended a conference organized by the Health Ministries department in Geneva, Switzerland, to learn how to start programs in their own communities.

The aim is to provide a Christ-modeled blend of physical and spiritual healing to local communities through fitness classes, soup kitchens, cooking classes, stress management programs, and the innovative Breathe-Free 2, a new stop-smoking program launched at the Geneva conference.

The Review and Herald and the Pacific Press publishing houses approved the biggest restructuring in Adventist publishing’s 153-year history in June, embracing a plan that Adventist leaders hope will strengthen the church’s U.S. digital presence and ensure the long-term viability of its publishing work.

Under the restructuring, the financially troubled Review and Herald Publishing Association unwound operations at its 83-acre facility in Hagerstown, Maryland, with all print operations ceasing by December. Some employees and assets were transferred to the Nampa, Idaho-based Pacific Press Publishing Association, which became a North American Division institution.

6. The North American Division grows up.

The North American Division, which only spun off into its own entity from the General Conference about 25 years ago, came into its own in 2014 by acquiring its first institutions. The division took ownership of the Pacific Press publishing house in July and got final approval to oversee Oakwood University in November. The division secured both entities from the General Conference.

The acquisitions put the North American Division on the same footing as the Adventist world church’s other 12 divisions, many of which also control their own publishing houses and universities.

Other than women’s ordination, perhaps the most-discussed topic in 2014 was a series of statements from church leaders, scholars, and educators that underscored the biblical teaching that life has existed on the Earth for only a few thousand years.

Adventist Church leader Ted N.C. Wilson highlighted the church’s position in an Aug. 15 keynote speech at a Bible and science conference in which he said teachers who believe that life has existed on Earth for millions of years should not call themselves Seventh-day Adventists or work in church-operated schools.

Other speakers, including biologists, geologists and theologians, made presentations on both scientific data and biblical teaching supporting a short chronology of life on Earth at the 10-day conference in St. George, Utah. Michael L. Ryan, a vice president of the Adventist world church, urged attendees during a Sabbath sermon to follow the examples of Moses and Daniel, biblical leaders who greatly influenced the world by rejecting popular science to embrace a Creator God.