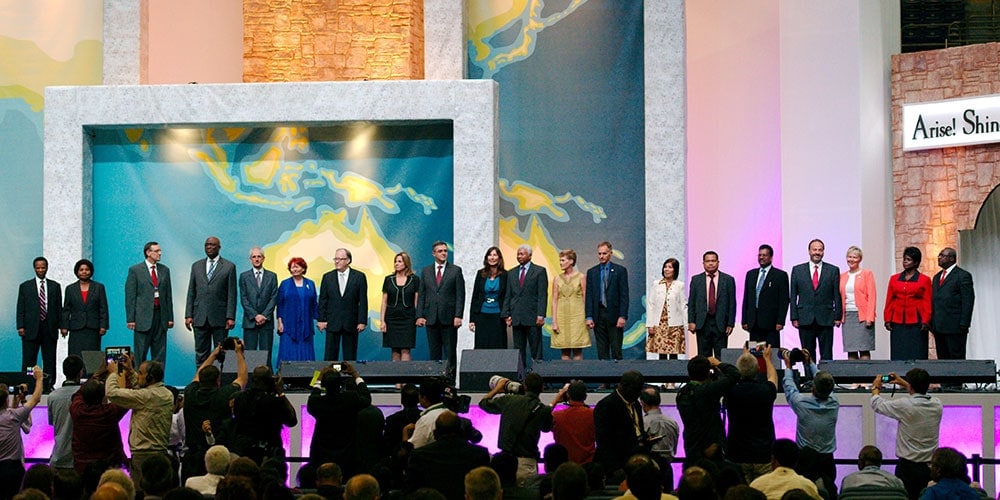 These new leaders replace incumbents who retired, were not reelected, or, in the case of the Euro-Asia Division’s Guillermo E. Biaggi, moved to the General Conference as a general vice president.

Here are the names of the division presidents in alphabetical order:

Dan Jackson, 66, was reelected for a second term as president of the North American Division (NAD). Jackson, a native of Canada, served as a pastor, teacher, and administrator in Canada and the Southern Asia Division.

Raafat A. Kamal, 51, has been president of the Trans-European Division (TED) since 2014. Originally from Lebanon, Kamal began his denominational service as an educator. He served in England, Norway, Pakistan, and Iran.

Michael F. Kaminskiy comes to the leadership of the Euro-Asia Division (ESD) after being secretary and vice president of the division.

Erton C. Köhler, 47, was reelected as president of the South American Division (SAD), a position he has held since 2007. A native of Brazil, Köhler was the youngest division president when he was elected, after serving as conference and division Youth Ministries director. He graduated with a degree in Theology from Brazil Adventist University.

Ezras Lakra most recently served as president of the Northern Indian Union Section based in New Delhi. He and his wife have two children and one grandson.

Jairyong Lee is returning as president of the Northern Asia-Pacific Division. Lee, president of the division since 2005, began his pastoral career in South Korea. He has served as a professor of theology, and was director of the 1000 Missionary Movement. He was elected division president after serving as Ministerial Association secretary, Stewardship director, and Global Mission coordinator.

Israel Leito was reelected as president of the Inter-American Division (IAD). Leito, president of the IAD since 1994, has seen membership in that division go from 1 million to 3.7 million members. Leito, a native of the Caribbean island of Curaçao, breaks a record for longest serving division president, a position he has held for more than 21 years.

Paul S. Ratsara has been president of the Southern Africa-Indian Ocean Division since 2005. Before that he served as the secretary of the division. Dr. Ratsara lost his wife, Denise, in 2013, following a battle with cancer. He married Joanne in November of 2014 and their blended family includes nine children.

Blasious M. Ruguri was first elected president of the East-Central Africa Division (ECD) at the General Conference session in 2010. He began his career as a district pastor, eventually becoming division secretary. He studied global leadership at Andrews University.

Elie Weick-Dido comes to the presidency of the West-Central Africa Division (WAD) after serving as Sabbath School/Personal Ministries director for the division. Weick-Dido has earned D.Min. and Ph.D. degrees from Andrews University and served as pastor of a Haitian congregation