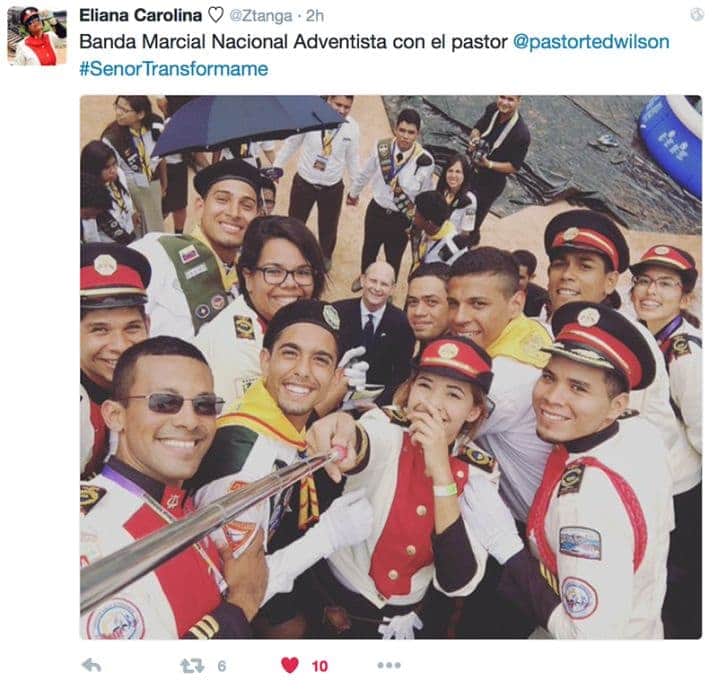 A total of 4,012 people were baptized during an evangelistic rally at a Caracas stadium last Sabbath, the culmination of eight months of intense outreach work across east Venezuela.

More than 20,000 people gathered at the Caracas University Stadium on the morning of April 16, with some traveling more than 36 hours by boat, air, car, or bus to recommit to sharing hope in their communities and to pray for Venezuela’s leaders and people.

“I am moved beyond words at the dedication of our church leaders, pastors, and members just to be here,” said Josney Rodriguez, president of the Adventist Church’s East Venezuela Union. “It is no secret our members are struggling in so many ways, but their commitment to the mission of the church has been incredible to see.”

He said the mass baptism, the largest in the church’s 106-year history in the South American country, was the result of pastors, small group leaders, and lay members working together in 5,000 small groups across the eight conferences and missions of the East Venezuela Union. Some 800 small groups met to study the Bible in Caracas alone. Those Bible studies ended with 200 evangelistic meetings led by local and international evangelists from across the church’s Inter-American Division in local churches last week

Sabbath’s celebration also marked the launch of a five-year evangelism initiative by the Inter-American Division to encourage its 3.8 million members to seek a daily transformation in Jesus, become more involved in the life of the church, and commit to sharing the love of Jesus in their communities.

Ted N.C. Wilson, president of the Adventist world church, appealed to the people in a sermon to seek a relationship with Jesus, to study the Bible, and to allow the Holy Spirit to bring about change in their lives.

“Allow God to use you to make a difference in Venezuela and any other place you are at,” said Wilson, visiting the country for the second time since being elected president in 2010.

“You have an opportunity to give people hope, to share encouragement, and help people see a bright future ahead, in spite of the challenges you face every day,” he said. “Allow God to use you to witness how God is changing the lives of people all around. You may lose everything. But you have Jesus, and He can transform your life.”

Wilson joined Israel Leito, president of the Inter-American Division, in watching pastors and church elders baptized the new members in 70 inflatable pools placed along the fringes of the stadium’s baseball field. Each person who was baptized released a helium-filled balloon into the air as a pledge to pursue a daily transformation in Christ. The balloons bore the logo of the Adventist Church and a note with a Bible verse and a message of hope attached to a string.

Music also filled the air as 1,000 choir singers, 600 band members, and a 200-member orchestra with musicians from across the region played a selection of songs.

In the afternoon, hundreds more people offered free health screenings for skin care and dental checkups as part of Cerca De Ti Caracas (Close to you Caracas), an outreach program that the local church has organized for the past three years.

The event became one of the top trending topics on Twitter in Venezuela, with more than 16,000 tweets using the official hashtag #SenorTransformame, said Abel Marquez, communication director for the Inter-American Division.

The morning program was scheduled to be transmitted live via satellite, but it was postponed because of technical issues, Marquez said. It is to be broadcast at an unspecified date later this month.

Among those baptized was Freddy Morocoima, 22, who traveled nearly two days from La Gran Sabana, in southeastern Venezuela, to join the celebration.

“I have this great joy in my heart today. I feel like a brand-new person,” said Morocoima, a member of the Mesek Meru indigenous community.

He said his days had been filled with anger, drinking, and smoking until his father-in-law invited him to join a small group for week of prayer meetings.

“I was so impressed and moved by the message that I continued attending and began to feel a transformation take place in my life,” said Morocoima, who serves in the military.

He said he believes God also saved his family because his wife had been ready to leave with their two small children.

“My life has a new meaning, and I’ve left the bad habits behind,” he said.

He dreams of becoming a pastor and sharing Jesus with his community.

Maria Iriza said she has found the peace that she has sought for most of her life. Her mother abandoned her an early age, leaving her to live in the streets and exposed to drugs and violence. She became a single mother at 15.

“My life changed when I began to study the ‘Faith of Jesus’ Bible studies with a friend just a few weeks ago,” Iriza said.

She was among hundreds of people who attended evangelistic meetings in Caracas last week. While listening to a preacher at El Paraiso Adventist Church, she decided to give her heart to Jesus. Her husband, who also attended with their 10-year-old son and 4-year-old daughter, asked to be baptized, too.

“In the course of just a week, I got married to my husband. God worked it so my husband does not have to work on Sabbath,” Iriza said.

“God took away my anger, my aggressive attitude, and gave me peace,” she said. “He teaches me every day to trust Him and let Him guide and protect me and my family in a powerful way as we raise our children to follow in Jesus’ footsteps.”